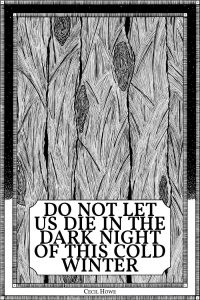 All right, and now for something COMPLETELY different! I’ve had this book for about 2 years by now; I purchased it on a whim, and then never got around to using or reviewing it; there always was something else up, some deadline approaching. So, at long last, let us take a look at this?

“Do Not Let Us Die In The Dark Night Of This Cold Winter” (“Cold Winter” for convenience’s sake below), in its essence, is a survival game of resource-management; it can be played as a stand-alone mini-game, and it can be inserted into pretty much any roleplaying game, though its aesthetics make it most suitable for low magic, dark fantasy and horror games; it should be noted that it’s perfectly functional even in a world without magic. From PFRPG to 5e to DCC to the various OSR-rule-sets out there to e.g. Hârn, this mini-game can be inserted into pretty much every system.

The pdf clocks in at 53 pages, 1 page front cover, 1 page editorial, 1 page notes –leaving us with 50 pages of content. If you’re looking at this review on my homepage, I’ve included pictures of the hardcover I own – it deserves mentioning, because I love its aesthetics: It has the name prominently on the spine and displays a stark, black darkness, with a field of snow at the bottom whether the dots in the unending black are flakes of snow, stars, or a combination thereof, just gazing at it makes me feel both tranquil and anxious. Really cool. This effect, in the inside, is partially inverted, with negative snow, black flakes, on white pages – it’s not annoying or intrusive, but it creates an impressive aesthetic identity. 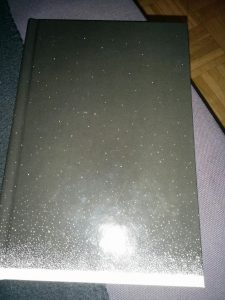 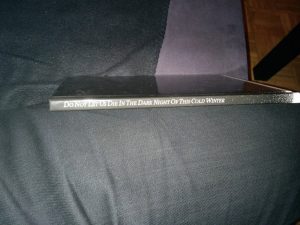 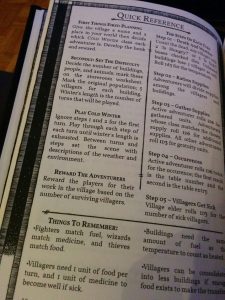 How does this game work? Well, first of all, you have to think about your PCs: Cold Winter knows three roles – “Fighter” as a catch-all for martials; “Wizard” as a catch-all for any character capable of casting spells, and characters more focused on agility and skills count as “Thieves.”  These are known as “adventurer jobs.” Each of these jobs matches one type of supply: Fighters match fuel, wizards match medicine, and thieves match food.

The premise is that the PCs are snowed in while in a small and remote village, and that they have to last the winter. As such, it makes sense to establish a lore for the village, with some aptly-foreboding examples presented. Three pages of map-geomorphs are included in the book – you can just print them and glue them together in any way you’d like – this proved to render village creation quick and painless, and I applaud its inclusion here. The game talks about some sample hooks to draw the PCs in, and also about rewards for survival.

In order to play, you only need two d6s – and to know how to use them to make a d3, a process the book btw. explains – so yeah, even newbie-friendly. The book also cautions you regarding more high-fantasy environments; as a game of survival, it is predicated on scarcity, but frankly, it’s just a matter of scope. No matter how much food you and yours can conjure forth, it’s just a matter of tweaking occurrences that bleed resources, the system, etc. – heck, you can theoretically run this in a Scifi-game or in a high fantasy Fimbulvetr-like scenario; you could tweak the systemfor Banner Saga-like scales, but I digress.

The village’s lore and overall make-up has been established (and if you don’t want to do that work, e.g. Raging Swan Press has a vast wealth of villages that you could just scavenge…), and after that, there are three things to populate the village: Village folk, buildings and domesticated animals. Ideally, there will be one building for each adventurer, but my experience has shown that it’s pretty easy to tweak the system to accommodate for larger settlements – for the purpose of this review, we’ll be taking a look at the “vanilla” unmodified assumptions of this game, though.

The difficulty of the game is also contingent on the number of Turns you decide upon – a turn may represent a day, a week, a month, or any other time-frame you want. Each turn is resolved in 5 steps, with the first two steps skipped during the first turn. Why? Because the first step is the counting of the dead and weather forecasting. Weather forecasting means that you roll a d3 – this is the amount of fuel you need per building to keep villagers from dying during that turn. A building without sufficient fuel will have a villager die in said building.

Step 2 deals with supply-rationing. The supplies held in the storeroom are divided among the buildings, and it is here that decisions to make folks go hungry or to slaughter domesticated animals are made. Doing the latter nets you btw. 2 units of food per animal. If a villager doesn’t get to eat, you check the “Is Hungry?” box on the worksheet that is included. If a villager is sick, you check the “Is sick?” checkbox, and a hungry or sick villager that receives food or medicine, respectively, erases the checkmark placed.

Now, I already mentioned the 3 supply types: An ill villager that doesn’t get medicine for 3 turns, dies. A single unit of medicine makes them well again. A hungry villager who doesn’t receive food for two turns, dies. Feeding one will result in check marks being erased. Fuel is special, in that villagers will attempt to get as much as possible, even if there is not enough to heat a building – so if you only have 1 fuel left, but temperature is 2, they will take that last one fuel and still have one die. On the first turn, the brief errata included assumes a temperature of 1, but frankly, this is one instance where I consider it to be not necessarily required – you can just as well roll the die.

In step 3, the adventurers set out, as a group, to gather supplies – you roll a 2d6, and that’s the amount of gathered units. If the adventurer role corresponds to the supply, you add +1d6. Adventurers that did not roll for such additional units still roll 1d3, gaining units in their associated supply type.

Step 4 is the one where you can customize the hell out of the game – Occurences. These are basically strange and unfortunate things that make happen – blood smeared on all doors, an icicle killing someone, etc. You roll 2d6 to determine those, and the majority, but not all of them, are negative. The first d6 indicates the table used, the second the entry – simply, and ridiculously easy to expand upon. These can, for example, entail a sick villager stealing all medicine, overdosing and dying.

In step 5, we determine how many villagers become sick – 1d3 is rolled, unless an occurrence gives the settlement a brief reprieve. These are the villagers that become sick. At any point during one of the steps, the PCs may decide to consolidate buildings. The total number of villagers involved in a consolidation can’t exceed 5, and at least one spare unit of food must be available per villager that moves  – consolidation may allow you to spare more fuel, but it has a hefty price regarding food! This has been errata’d to make moving more appealing; originally, the cost was one food per involved villager, which made consolidation riskier, obviously.

And that is the base engine – complications stem from the occurrence tables, where food spoiling (eat it or destroy it?), theft and the like may be found. When a villager becomes mad and freezes, he dies…and you can elect to convert his body into 5 delicious units of food… The occurrences are amazing and really inspiring – if they don’t get your creative juices flowing and make you want to add more to them, well, then I don’t know.

As previously mentioned, the game comes with worksheets for buildings and the storeroom as well; a quick reference summary on one page makes for a great GM-insert, and the book is littered with examples that illustrate how the game works.

Beyond all of those, we receive well-written additional adventure hooks – from a carousing replacement to acting as a board-game of sorts, there are a ton of great ideas here – oh, and guess what? We even get a massive array of sample descriptions that help you generate an appropriate atmosphere. Beyond that, there are suggestions for optional rules, like requiring that you burn dead villagers (which costs fuel), or the dead may cause others to become sick. The funerary pyre may or may not influence temperature, depending on how you wish to tweak it.  Independent supply gathering is noted, and the geomorphs I mentioned could just as simply be used as a die-drop chart.

Suggestions for an easier or harder game are presented, but if you have even the slightest bit of hot designer urges pulsing through your body, you will, at this point, have your mind ablaze with the possibilities of this humble game.

Editing and formatting are excellent on a formal and rules-language level. The errata, while usually something I don’t include in my verdict, ultimately makes the presentation of a few rules-components a tad bit clearer, and makes consolidating houses less punishing – the game worked perfectly fine without it, so I won’t include its impact in my verdict. Layout is surprisingly impressive – with stark b/w-artworks, the neat cartography and the snow theme, this is a surprisingly beautiful book.  Now, I strongly suggest you get the print copy. Why? The pdf, in a grating decision, lacks bookmarks – if you want to go for just the electronic version, please detract a star from ym final verdict for the inconvenience caused by that.

From the recommendations regarding background music (+1 for Silver Mt. Zion!) to the evocative, terse read-aloud descriptions and the mysterious, somber occurrences, this book is a brilliant little gem. The beauty of the base-engine’s simplicity means that modifications can be applied by relatively inexperienced GMs and designers, and the engine could easily carry the insertion of a vast amount of modifications, tweaks, etc. While the unmodified version works best for grittier games, even minute modifications regarding e.g. food consumption could account for PCs capable of making food, for e.g. a fire wizard capable of generating 1 temperature if he stays in one building (and doesn’t gather resources…) – the beauty of this system lies in how many different screws to turn there are!

Cecil Howe’s “Do Not Let Us Die In The Dark Night Of This Cold Winter” is a rewarding, inspiring and genuinely brilliant little mini-game that can potentially inspire whole campaigns, act as an interlude, or anything in-between. It is a brilliant little book, and since it’s my list, and since I failed to review it for such a long time, this is nominated as a candidate for my Top Ten of 2018, and receives 5 stars + seal of approval for the print version. If a gritty, somber and different mini.game is what you’re looking for, do yourself a favor and get this ASAP.

You can get this inspiring, rules-lite downtime-game here on OBS!

If you’re enjoying my reviews, please consider supporting my patreon – it keeps the lights on.