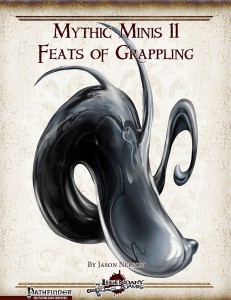 This time, we’re all about feats of grappling, so let’s check this out!

We kick off with the mythic teamwork-feat equivalent of “Brutal Grappler”, allowing you to be even more deadly when grappling in teams, allowing you and your allies to benefit from mythic tiers and allowing you to substitute combat maneuvers for bonus damage of crits. Solid.

“Carry Off” allows you to better move targets hit by the snatch or grab special attacks – nice for respective critters. “Final Embrace” and its two follow-up feats makes constricting mythic foes deadlier and also allows you, with the improved versions, add the frightened condition to said foes and further amp up the damage output. All solid, like “Brutal Grappler”.

“Inescapable Grasp” is something that should have been houserules – a way to negate the annoying auto-success of freedom of movement and thus practically non-optional for grappling creatures beyond a certain CR. “Pinning knockdown” also autotrips foes you’ve pinned – which is nice, but opens a sort of bag of worms – I *assume* stability and similar abilities no longer protect from this one, though to me, getting them as a bonus to CMD versus being tripped feels *right*. So yeah, not a fan and some very minor potentially rules-fidgeting here. The improved version vastly increases nonlethal grappling damage and also makes it possible to temporarily negate immunity to non-lethal damage/DR. Kind of nice, but not sure whether it’s worth the feat-slot.

“Rapid Grappler” can be used 1/round and allows you to grapple as a free action when using greater grapple. Mythic power allows you to roll twice and use the better result. I’d usually complain about action economy here, but a) it’s grappling and b) the feat-tax of this one is already rather high, so yeah – nothing to truly complain about.

Jason Nelson and Tom Phillips deliver a solidly crafted array of grappling feats, arguably for one of the most loathed mechanics of the game – and the feats per se are mechanically solid and well-crafted, yes. But they also felt universally somewhat artless to me – they are solid, don’t get me wrong, and they do improve e.g. serpentine grappling, giant flyer-snatching etc. But they don’t do something truly mindblowing – they do fix some gaps in the rules, though, and overall, I wasn’t disappointed by the pdf per se. I wasn’t wowed either though – hence, this is the quintessential 4-star file – good, but sans the spark of additional brilliance.