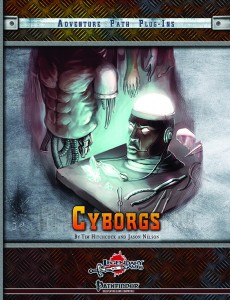 Okay, so the cyborg as envisioned here is a base class with d8, 6+Int skills, 3/4 BAB-progression, good Fort- and Ref-saves as well as proficiency with simple weapons and any weapons installed in modifications as well as light armors, but not shields. Obviously, they get Technologist as a 1st level bonus feat. The base class’s modifications are more defined by two particular abilities, though, the first of which would be the Internal Nanite Matrix – this matrix nets the cyborg a scaling array of central nervous system powered nanite charges (abbreviated as NC), which can be used to power cybernetic modifications as well as tweaks. The array of these points would be equal to 5x class level + Int-modifier, with 8 hours of resting restoring the NC points expended; tweaks need to be prepared in advance.

1st level cyborgs begin play with a basic cybernetic modification and are part of the cyborg’s body and thus not subject to disarm or sunder, with duration and power being determined by class levels attained. The cap for using NCs to power these enhancements is equal to the cyborg class level reached and unless otherwise noted, the modifications can be used at will, but have a cool-down period of 1 minute, during which they cannot be used again, preventing the spamming of individual choices. 4th level and every 4 levels thereafter net an additional such modification. The respective cybernetic modifications the cyborg can choose are interesting in that they tend to have more than one potential use – the basic spine-enhancer that provides an ability-score boost can e.g. provide either cerebral or spinal enhancements. On another interesting note, there are also some modifications that replace certain parts of the cyborg’s body -arm modifications, for example, replace the cyborg’s arm and hand – on a nitpicky note, I’d very much have appreciated this one precisely stating that the arm in question also eliminates the wrist slot, but that’s just me being complaint-prone.

Arm-wise, you can get a weaponized mechabot arm for a circular saw blade arm that can be activated via NCs or get a medibot arm that not only improves healing capacities, it can also unlock certain spells as tweaks usually restricted for spinal implanted cybeorgs. powered arms and shielding arms complement this section and cyborgs may also elect to gain Propulsion Boosters, which may be used for water, underwater, etc. travel of 60 ft + 10 ft. per level in brutal bursts or use this booster to enhance his bull rush/overrun attempts: The jerky burst of speed feels very cyborg-y in its rules to me – kudos! Not all enhancements are this precise, though: Take Regenerative Nanites, one of the dermal implants: “The nanites require exposure to external power source to function. When created, the cyborg chooses a single type of energy (acid, cold, fire, electricity, negative energy, or sonic) to power the nanites. When activated the nanites grant fast healing, repairing a number of hit points each round equal to 1 + the cyborg’s Intelligence modifier, +1 additional point per 5 cyborg class levels. Once damage is fully repaired, the effect stops and the implants must be recharged.” Does this mean they’re only triggered by being subject to the energy? The wording seems to imply it, though usually, one such energy actually eliminates the nanites and, depending on the energy chosen and the free cantrip-availability of some of them, we might be looking at an easily cheesed infinite healing exploit – and sans the caveat, a similarly easy, but slow infinite healing exploit that is not suitable for every game. From sonar-powered blindsight to oxygen-storing gill-like enhancements and short-range bursts of sonic damage, the class per se features several intriguing and visually compelling enhancements – though aforementioned sonar projector either has a DC that’s simply too high or a glitch – instead of 1/2 class level, the save DC is determined by adding full class level, which not only deviates from other abilities of other classes, but also from the majority of abilities of the class. Indeed, such minor imperfections can be found slightly more often herein than usual for a Legendary Games-supplement: The Force Pulse ranged stunning-option, for example, do not specify the damage type the pulse deals. Powerful, at-will NC-based eye-rays can also be found herein, though they do not remain the only component and tool at the cyborg’s hands: Starting at 2nd level, the cyborg gains a nanite surge, which nets 1d4 temporary NC that can be assigned to a given modification, but not to a tweak. The cyborg gains another such surge at 5th level and every three levels thereafter, which can also be freely dispersed between a single surge or different, smaller surges.

Additionally, the humanity loss incurred by cyborgs is represented by Charisma-decreases at 5th level and every 5 levels thereafter. One the nitpicky side, the ability can’t seem to decide whether “1 point” or “one point” increase of an attribute should be considered to be the standard. 7th level sees the cyborg determine a rapid recharge modification, which then decreases the recharge-interval. The cyborg may choose an additional such ability every 5 levels thereafter.

At 3rd level and every 3 levels thereafter, the cyborg also attains a modification mastery, which should be considered to be the talent-section of the class – these allow for e.g. skill-enhancers, gaining of feats, salvaging cybertech or integrating devices as cybernetic modifications. They can also siphon power from technological items into their nanite matrix, but only to a limit

Cyborgs also cast a type of “spells” called tweaks – these would be governed by Int and are somewhat different from regular spells in that, while they need to be prepared in advance, they are not expended upon being used – instead, they consume NC equal to their level – these “spells” are called tweaks and unlike spells, the cyborg is bound by his level regarding the amount of tweaks known Tweaks may only be replaced at 4th level and every even-numbered level thereafter. The interesting thing regarding these tweaks beyond their uncommon resource obviously lies in their restriction – basically, the modifications also determine the tweaks available – cyborgs with eye-enhancements get different tweaks than those with modified legs.

The pdf also sports 3 feats for cyborgs – while obvious what Anthroposophist means “You resist the effects of humanity loss to your Charisma by 1.”, it is simply not too elegant in its wording: “resist” usually denotes resistance, which is the damage-reducing terminology usually employed for energy types and thus implies a flat-out reduction of the attribute decay. This, however, is contradicted by the ability to take the feat multiple times – the wording here could be more precise. The other feats allow for additional NC and the ability to use your body to boost tweaks: This is problematic, though: “You can bolster the effect of one of your tweaks increasing its power level for one use.” All right, by how much? I get the Con-based duration, but the feat’s actual effects, alas, remain somewhat opaque.

The pdf also sports archetypes for the cyborg (and other classes) – the cybermancer learns a limited amount of sorc/wizard spells as tweaks instead of modification mastery…and this one s pretty nasty: NC-based fireballs? OUCH, particularly since spell surge replaces the nanite surge and can be used to temporarily increase the CL. Hunter-Killers do not gain Technologist or Tweaks, but do gain a rogue’s sneak attack progression and 8th level Death attack as well as quarry and an EX-based invisibility…which is very powerful and should, in spite of the flavor, probably be SP, if only for balance/invisibility-counter-measures – as written, this ability is extremely strong, borderline broken with Death Attack. Mechlancers get a cavalier-like mount that is subject to their class abilities and share NC between mount and cyborg – odd: The archetype does not pay for any of the better charges and the like, with the exception of a stunted tweak-progression, which is kind of nasty. Additionally, the archetype fails to specify how cybernetic modifications affect the mount – can the mechlancer modify the mount as a separate entity or is it treated as an extension of the cyborg? I’m not 100% sure and quite frankly believe that this archetype needs clarification.

Bloodragers may elect to become techragers, which get the artificer domain power, crafting, DR and minor bonuses versus poisons, death effects, etc. and at high levels, you may infect foes with a nano-virus than send them into unconsciousness, then kills them and adds a final insult to the injury by making the victim a cyber-zombie, as represented by the template featured herein.

Editing and formatting, on a formal level, are pretty precise; on a rules-level, though, there are more ambiguities in here than I’m comfortable with. Layout adheres to Legendary Games’ beautiful two-column full-color standard for Iron Gods-plug-ins and the pdf comes fully bookmarked for your convenience and sports the good type of unobtrusive hyperlinks. The pdf sports gorgeous full-color artworks, some of which you’ll know, while others are brand-new.

Tim Hitchcock and Jason Nelson deliver a class I really, really want to love – the cyborg has several thoroughly inspired pieces of content and the way it plays very much mirrors well the feeling of jerky bursts I wanted to see in cyborgs. I am a big fan of the cool-down/recharge mechanic and consider it to be not only awesome, but also rather inspired. At the same time, though, this pdf is haunted by instances of flawed rules-language, imprecise tidbits and, worse, some options that fall in the borderline broken category – I’m not sold on the balancing of archetypes, the wording of feats, infinite healing (not suitable for every table, even when slow – personally, I ban every class with this feature…)…you get the idea. While the cyborg as a whole works, there are a LOT of small glitches in the construction of this one that make it feel, ironically, like it was cobbled together from two systems with different power-levels/requirements – on the one hand, you have high-concept awesomeness and complex material done right, on the other, the class sputters and glitches…and the archetypes obviously should have seen a bit more playtesting…

As much as I love a significant section of this pdf, about 3/4 of it, the rest ties into it and is seriously flawed in some sections, dragging down the book. My final verdict, with a heavy heart, will clock in at 3.5 stars, rounded down to 3 for the purpose of this platform.

You can get this inspired, but also flawed class here on OBS and here on d20pfsrd.com’s shop.
Endzeitgeist out.