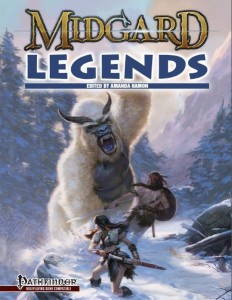 Humans have a desire for legends – they speak on some primal level to our own failings, to our dreams, hopes and aspirations and incite us to be the best we can. They daunt us with impossible tasks, offer symbolic and iconic obstacles, warn us away from the vortex of sins and destructive behaviors and touch us by speaking to the archetypical topics of our existence. In roleplaying games, however, this all too often translates into “Let’s stat legendary creature/character XYZ so PCs can kill him/her/it.” Not so in this book.

What we get here are legends and as such, they are not necessarily intended to be fought, nor do they have to be beings. Instead, they represent concepts, truisms, truths that resonate within the world of Midgard, supplemented by crunchy pieces of content where appropriate. Take the first legend, the one of Abderus, first wizard of the infamous House Stross, providing three of the spells that made him be known as the devil’s commander as well as the lance of Khors, all packed with ideas to spark investigations into the history of the man and the places he left behind. Melathea Stross, the black sorceress, taught by both Baba Yaga and the Moonlit Court, while lost between worlds, remains an echoing force as well, her incantations (2, one to open gates and one to summon fragments of great old ones) and the Fey Waystones being testament to her arcane prowess.

Other legends are centered as much around personalities as around items of legend, like the legendary Khazzaki Khan Achaz, wearer of the horned  crown. Or take the Azure kings – spawned in the coldest of climes, these blue-skinned barbarians have been changed by proximity to a near-deity-level haunt and now their progeny may, via 3 traits and 2 feats, exhibit the vast prowess of these beings, wielding oversized weaponry and fighting with a larger reach – especially awesome if the person in question can come into possession of the evil Menneskelig-død, a huge legendary axe carved from the ice of the haunted Riphean glacier…

If you’re more inclined to subtle dealing, be wary of the Blackened Man – offering a life for a soul, pain for pain or mercy for madness, the mysterious figure offers your heart’s desire, but forever marks you with the sign of the black sun, condemning the bartering individual, but also providing vengeance perhaps otherwise unrealizable.

When this book was announced, I sincerely hoped that we wouldn’t get stats for Baba Yaga – and thankfully, we don’t – instead we get the stats for Blood Mother Margase, the CR 26 blood druidess  that vies for nothing less than godhood – the insane arcanists that wrought the cataclysm in the West have after all shown that the mortals need her guidance. Speaking of guidance, though of a more benevolent and less extreme manner –  Calm-Tongue, a true scholar and gentleman, single-handedly not only spread language and enlightenment and a philosophy of non-violence, he also more or less single-handedly raised the gnoll race from savagery into a status where they may not be liked, but at least often are accepted, raising his kin to a more civilized form. Rules-wise, his teachings reflect an alternative, focused barbarian that replaces rage with a dex and wis-enhancing state of tranquility. Interesting!

In the 7 Cities, there is a bloodline, the bloodline of Jannik and his daughters still can call upon his spirit to help them when near Sperenza, gaining rather significant boosts in power by his vow to forever protect those of his blood. Enkada, whose name shall not be uttered , still guards his name, his shadow being drawn by investigation, covering the curious in poisonous strands and haunting them via his rather deadly shadow – coolest, though in his entry would be the incantation that draws attention if the name of the caster is uttered…

A legendary horse, the questing beast, the lord of doors who guards passages anywhere, the first storm that contains the last remnants of the first cultures of Midgard, the kobold that ruled empires, the fully statted founder of the Mharoti Empire, the lucky man who brings misfortune to all around him, the legendary songraven and his bardic disciples, Saint Vadim to a lich betrayed by her love and so much more, the legends herein cover a broad spectrum of topics. I’ll stop spoilering now – if you want to know more about them, you’ll have to get this book.

Editing and formatting are top-notch – I didn’t notice any significant glitches. Layout adheres to a beautiful full-color two-column standard and the original b/w-artworks, one for every legend, are a joy to behold. The pdf comes fully bookmarked for your convenience.

These are legends and they resonate. They strike the right chords, the right topics, adding depth, primal concepts and wonder to a world already rich in all of these attributes, without being necessarily restricted to Midgard, though application to another setting admittedly would take some work. This book does not fall into the trap of over-crunching the topic at hand – legends don’t need hard rules (though the ones provided herein help to mechanically represent their wonder), what they need is an essence and the writing universally captures this. While the rules are solid, it is the writing and the writing only that decides over weal or woe regarding this product and it succeeds with accolades: Providing hooks and ideas galore, enough to last for years, these legends are Kobold Press/open Design at their very best: Iconic, ancient, suffused with wonder and magic and helping so much more in bringing the sense of wonder to one’s gaming round than the oomphteenth selection of feats, traits and spells. Don’t get wrong, I have nothing against them and e.g. the traits and feats for the Azure Kings, the incantations and spells etc. all are welcome, but ultimately they should supplement the material, not be its essence.

We need more books like this, books with a heart that put the wonder, the amazement, the tragedy and triumphs in the center and provide the readers not only with great rules, but with ideas and concepts that resonate beyond the gaming table. Even if you don’t use Midgard, I wager that scavenging the legends should enrich your game vastly, as it is my firm opinion that no one can read this book without drawing some kind of inspiration from it. A stellar offering and one of a kind of which we require more – I hope to one day see a sequel and other campaign setting should take heed here: this is how you add life and virility to your reader’s imagination regarding your setting. My final verdict will unsurprisingly clock in at 5 stars + seal of approval.

Want to add the stuff of legends to your campaign? Here you go!