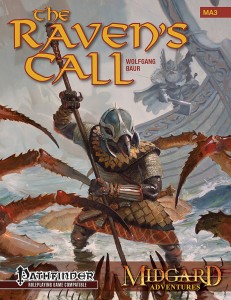 This module is 21 pages long, 1 page front cover, 1 page editorial, 1 page SRD and 1 page advertisement, leaving us with 17 pages of content, so let’s take a look!

This being an adventure-review, the following contains SPOILERS. Potential players may wish to jump to the conclusion. Still here? All right!

The world of Midgard, the Northlands – rather specifically, the small thorp called Nargenstal… has seen better days. Thankfully (depending on the hook), the Shadow Road known as Raven’s Road opens for the PCs and dumps them near it – for unfortunately, the village has been taken. By whom will become apparent once the PCs encounter the few villagers that have escaped: Trollkin (which btw. are fully statted) and their kobold allies have taken the thorp and most of the surviving villagers hostage. The PC’s objective thus will be to infiltrate the village and take it back – but how they do that is up to them – trying to kill foes one by one for example might result in revenge-killings f hostages and if trollkin perish, their shaman will demand weregild and start joining the fray. Shaman? Yes, from Kobold Press’ New Paths-series, the shaman is essentially a prepared caster variant of the druid – with quite a few different unique options.

Speaking of options: Two mercenaries are selling enhanced alchemist’s fire (so-called demonfire) that burns longer and produces soporific vapors, but while they sell them for a price, DCs and regular market prices for the item would have been appreciated. The sandboxy environment that is this module also is ehnaced by 12 optional minor tasks/subquests DMs may introduce to the fray to make the village and its surrounding areas come more to life. Speaking of life: The thorp was guarded by gaint crab that has been trained and is now under the command of the invaders – saving it might make for an uncommon ally. Counter-tactics for the PC’s actions and sneaking in are covered as well – the latter option being particularly interesting, since it require first luring the swarms of ravens away that have taken a liking to the carnage.

The village is beautifully mapped by Alyssa Faden and the bulk of the foes will soon either retreat or be waiting in the thorp’s inn – where the Ogre lord as well as the trollkin shaman make for interesting final bosses of the module. Said inn also holds a secret – its cellar hides 3 ancient sarcophagi and 3 javelins of Thor, mythic items. Mythic? Yeah, for this, at least to my knowledge, is the first module that actually has information for mythic tasks etc. – whether saving the crab, finding the javelins etc. Nice! Midgard’s status-rules also get a nice nod. The inn, again, is beautifully mapped in b/w, but since a secret compartment is included in the map, at least one of the 3 levels of the inn won’t be shown to them – which is a pity. A player-friendly map would have helped there.

Speaking of help: DM’s get help in tracking the occupying force by an easy-to-use table with percentile chances of particular creatures being in one location, while the PCs may encounter a help (or complication) in the guise of a dhampir treasure-hunter of questionable morals who is also after the javelins…

Editing and formatting are very good, though not perfect: I was at first stumped when a particular entry pointed my towards a “Blood Money” boxed text – which isn’t boxed. It’s there, it’s easy to find – it’s still a minor glitch. Layout adheres to a beautiful 2-column full-color standard that is a joy to behold and the b/w-artworks are universally awesome – especially at this very fair price point. The pdf comes fully bookmarked.

I really like this module: There aren’t that many good low level sandboxes out there and this one in particular deals with a trope that has been left mostly untapped and, in spite of the few pages it has to develop it, makes for a compelling scenario indeed – not one that is particularly exciting story-wise, but still a great scenario. It is not perfect, though: The alchemical item for example lacks proper default prices and the mercenaries from which the item can be bought lack stats, though pressganging/negotiating with them into saving the thorp is something most groups will probably try. That being said, the amount of detail crammed into his module is still interesting – swim and climb-DCs etc. –all provided. The optional side-quests also help to make this module come alive – to an extent that few modules manage.

There is a reason why Wolfgang Baur is such a celebrated author and this module shows experience in design, story-telling and details that are the hallmark of an experienced designer. The Kobold-Commander-in-Chief has crafted a cool module indeed, though one that is not as ambitious or mind-boggling in scope as e.g. “To the Edge of the World”. It doesn’t try to be – it’s a different beast, but another minor nitpick I had was that I would have enjoyed a slightly tighter focus of the mythic javelins in the story – as provided, they feel slightly like an afterthought added to the module.

Mind you, this is complaining at a VERY high level and I’m still wholeheartedly recommending this module – my final verdict will clock in at 5 stars, just short of the seal of approval.

Get this awesome little module here on OBS!