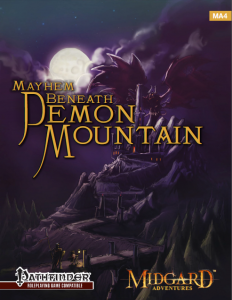 All right, still here? The PCs are hired by the wine merchant Korsav for a risky gambit – take his caravan to Demon Mountain’s foot and spoil the wine of one of his competitors, Ulfer, who happens to be one of the decadent children of the legendary Master of the Demon Mountain. Upon their arrival at Demon Mountain, the PCs have to surrender their weapons and make the spoiling of Ulfer’s wine a reality – during the 5-day-lasting festivities. Worse, PCs might notice that a couple of gnomes hide their weapons (these fellows are sworn to the lower planes in Midgard, after all!) and if they prattle, they immediately have a fight on their hands.

In the courtyard during the massive festivities, the PCs may witness a number of weird happenings – from corpses crashing from the tower, swarms of flies that suddenly dissipate to immediate cold snaps and silences, the PCs should be completely creeped out by the proximity of such epic power suffusing everything. The festivities per se also offer an array of weird tents – surviving the kiss of a vargouille as a wager, witnessing a crowd killing a gnome when they realize he has sown the elven faces on his “authentic” elven dancers, juggling limbs – a lot of rather weird and partially horrific things to do. Further complicating the matter, the aforementioned gnomes might try to assassinate the PCs if not having been taken care of.

And somewhere in the chaos, the PCs must find a kobold called Vyoda – and sooner than later, the PCs will try to infiltrate the outer donjon, where they may prevent a rape and save a poor kitchen maid from her drunken assailants and fight with multiple possible improvised weapons. Said maid may also point them towards the quartermaster who holds their equipment – a minotaur that can be bribed – if handled well. They may also expose a priest who worships a sinister god while collecting clues about Vyoda’s preferences to find him in the chaos outside. Upon finding the kobold, the PCs still have to navigate the lightless tunnels beneath the kitchen, where giant rotgrubs, a haunt, an otyugh zombie and a schir demon who wants to kill Vyoda still remains – for the kobold’s family’s fate, as can be attested by the clues gathered, was rather grim.

Upon spoiling the wine, the PCs can witness Ulfer being humiliated and rest on their laurels – though if they boast, they may have made a powerful enemy.

The module closes with 4 pregens.

Editing and formatting are good – though I noticed a couple of minor glitches, none really impeded my ability to run this module. Layout adheres to a beautiful two-column full color standard and the artworks are neat. The b/w-maps are awesome, though I would have loved a map of the chaotic festival grounds. The maps unfortunately come sans player-friendly versions, which is a minor detriment. The module comes fully bookmarked for your convenience.

Author Chris Lozaga has managed to do something hard – confront PCs with an iconic, overwhelming, epic location without having to result to hard killer-encounters, instead creating a deadly tapestry of weirdness that should make for a truly unique experience. I did not expect to like this module and its deceptive brevity also points toward an experience unbefitting of the Demon Mountain – when it isn’t. When it actually does the hard thing and manages to capture this epic location in all its weird glory, while leaving the true horrors of the mountain and its master up for appropriately high-level future sojourns when the PCs reach the apex of their powers. All in all a more than enjoyable module that only misses the highest honors due to the editing glitches and  since I would have liked printer-friendly maps/a map of the festival grounds, thus resulting in a final verdict of 4.5 stars, rounded down to 4 for the purpose of this platform.

You can get this uncommon, style-oozing module here on OBS!