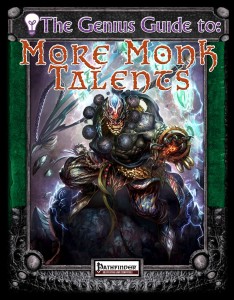 So, here we are, new talents for the excellent reimagining of the monk class and we kick off with 15 new talents – though that number, especially when compared to older installments in the series, is deceptive – some of these talents are MASSIVE. Take for example elemental ki powers – these allow monks to harness an element for which the monk has an elemental fist-affinity. Now, by expending a point of ki, the monk learns to harness one ability from the list of the respective element as a spell-like ability with thus a higher DC than its regular spell. Now, per element, 4-3 different choices PER ELEMENT are provided. Beyond even these choices, the choices are available for 4th, 6th, 8th level and subsequently in its advanced talent form, at 10th level, 12th, 14th and 16th level – with each of these steps netting access to a new potential array of spell-like abilities to learn – varied, complex, cool!

Now, not only the more esoteric monks get cool tools – take for example endless strikes – requiring flurry of blows to learn, this one lets a monk execute a vast array of weak attacks (resolved as one) – as a cool benefit, this allows the monk in question to damage swarms of fine and diminutive creatures for full damage – all while evoking a cool imagery. From improved retreating capabilities to switching places with an adjacent ally, there are more basic moves here as well. If you’d rather go telekinetic on foes, you’d might want to take a look at Ki Bolt: By expending a point of ki, the monk may turn his/her melee attacks into ranged attacks with an increment of 5 foot per monk level, allowing also for elemental synergy via elemental fist, if applicable. The grand caveat being, that thankfully, the monk’s reach s not expanded as well. Starting off as rather weak, the talent develops over time and overall, seems to be working just fine – but I do have one concern – since any melee attack can be made a ki bolt, can ki bolts thus be used to initiate combat maneuvers at range? If so, we’re looking a quite a can of worms, since they tend to be balanced by AoOs. While I think the RAI points towards maneuvers not being an option, the talent does not specifically prohibit the use of combat maneuvers.

Fighting prone and defensive martial poses make for less problematic options, as is the option to hit single targets of attacks with the effects of spells contained on scrolls. Making foes attempting to hold the monk falls prone, adding the ghost touch quality to unarmed attacks for 1 round, making spring-attack-like attacks combined with combat maneuvers and flipping over foes to get into flanking positions are some of the nice new options herein – though the latter is rather risky. Also interesting – returning throw, which allows for thrown weapons to return to the hands of the monk when thrown when thrown with a penalty to atk as a full-round action -now the catch (haha) is, the weapon may attack all targets within an arc the monk determines – with all attacks taking the potential range-increment penalty. And yes, batting the weapon out of its path is possible. This extremely complex talent is per se great and I get for which kind of weapons it was intended – the thing I consider problematic, though, in-game logic wise, would be that e.g. shurikens could be thrown via this talent – and that makes no sense to me. Yes, It’s probably a personal thing (I could still imagine throwing knives slicing foes as they pass), but shurikens feel more impact-related to me – and they can be thrown in groups if the respective character has flurry of stars – does the talent stack with flurry of stars? If it does, can individual arcs be determined for each shuriken or do they follow the same path? It’s a very specific nitpick, but one usage I know my players would try to pull off.

A filled gap in the rules now also allows the monk to deflect multiple missiles per round (and may reduce damage incurred by swarms) or follow a path that is in line with one type of outsider, with 6 sample paths provided, each netting some cosmetic changes and outsider-like benefits.

A total of 5 advanced talents are provided, with aforementioned paths being expanded upon and the already mentioned elemental abilities seeing a massive expansion. The defensive pose can be expanded, and there is a powerful, cool option that allows you to turn a spell-like ability into a supernatural ability – awesome! Monks focused on whirlwind attack may also learn to spend a ki-point to move their speed and make a single attack against every foe in reach at any point of the movement – OUCH! Range-weapon + monk movement= massive amounts of pain. Nice!

The Grand Monk Talents include the conclusions of the elemental ki power-talents and the significant benefits of the outsider-apotheosis talents.

The pdf closes with a handy list of monk talents grouped by theme.

Editing and formatting are very good, I didn’t notice any significant glitches. Layout adheres to SGG’s 3-column full-color standard with a gorgeous artwork and nice interior art. The pdf comes fully bookmarked for your convenience.

So far, content-wise, this pdf delivers quite a few complex, cool talents that do iconic, cool things and provide some options that simply rock – but the pdf has also one talent that makes my powergame-radar tingle quite loudly and here and there, a tad bit of additional information/restriction would have helped. Then again, this pdf does come at a very fair price-point and honestly, I don’t feel justified in rating in down – hence, my final verdict will clock in at 4.5 stars, rounded up to 5 for the purpose of this platform.