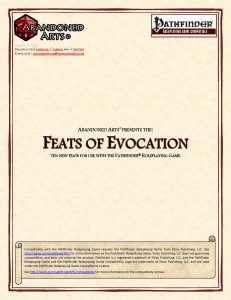 This installment of Abandoned Art’s more feats-series is 3 pages long, 1 page front cover, 1 page SRD, leaving us with 1 page of content, so let’s take a look!

-Brilliant Light: Deal nonlethal damage to light sensitive/blindness creatures that enter the area of your spells with the light descriptor, but only once per cast. Very cool!

-Disruptive Evocation: Increase the concentration DC of those damaged by your spells.

-Elemental Evocation: When using an elemental spell metamagic-enhanced evocation with a duration of concentration, switch element each round. Interesting, though very specific.

-Evoker’s Wand: Use 1 charge from the wand to unleash a ray at 1d6 per spell-level of the spell contained. Interesting mechanic, though it could use a cap.

-Evoker’s Staff: As Evoker’s Wand, but for staves, with increased range – and weirdly, it damage caps at 4d6, whereas the wand-feat has no cap.

-Improved Elemental Evocation: As its lesser form, but applicable to any non-instantaneous, non-permanent evocation and usable as a move action. Opens some rather interesting tactical options.

Editing and formatting are very good, I didn’t notice any significant glitches. Layout adheres to a no-frills landscape two-column standard. The pdf has no bookmarks, but needs none at this length.

I did not look forward to reviewing this one. In fact, I expected it to at best bore me – the opposite was the fact – for the most part. There are several feats herein that open up some rather interesting tactical options for evocation specialists. That being said, the feats also vary rather  in their power – between weak and on the upper end of the power-scale, there is some diversity in here, and in the details…some feel a bit off. The lack of e.g. a cap n the wand-feat, the rather weak light-shedding of force effects… there just are some examples herein that could have used some balancing in one direction or the other. Hence, in spite of really liking several concepts, their respective executions did not always win more and thus will result in a final verdict of 3 stars: Some gems, some duds and some rough edges.