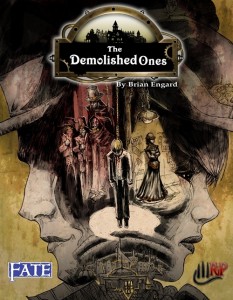 I don’t like the FATE-system. I really, really don’t like it. Much like alignments (which I LOATHE and always get rid of in my homebrew), I consider the reductionist concepts as reflected in e.g. the aspects as a factor that severely impedes the development of well-rounded situations and character-interaction, as a crutch that may be useful for inexperienced roleplayers, but at the same time as a ball-and-chain for experienced roleplayers seeking to portray a faceted, interesting character in constant flux and growth. I’m obviously the wrong target demographic here and I imagine some of you guys and gals out there feel the same. I’d encourage you to still read this review – things are not so simple in this case. All right, I’m as far out of my comfort-zone as possible, so let’s get this thing started: Here’s a quick summary of what you need to know, all taken from this book, btw. – you don’t require the FATE-core-rules to run this, though I do own them. (Bought them, read them, shelved them as “not my cup of tea.”)

What do you need to play? As FATE-experienced people will know, you’ll require specialized fudge dice (called dF) as well as some tokens to represent Fate-points. Tasks are accomplished by rolling 4dF and then adding the relevant skill and compare it with a basic difficulty modified by the “ladder”, a modification of tasks according to the difficulty of the task attempted. This basic formula may be modified by stunts and aspects. Aspects may be discovered and are part of the characters involved or the scenery, allowing you to take advantage (or be put in a disadvantageous position). In combat, DMs determine who acts when and each character may attempt an action on his/her turn. Damage is handled via stress, both to the psyche and the body, via composure or health. If you take stress that you otherwise couldn’t handle, you may incur a consequence of either minor, medium or severe level, all of which can absorb varying degrees of trauma and which are less easy to recover than the auto-recovering stress.

Now I’ve mentioned aspects –  Aspects are one sentence-descriptions of some of your character’s traits/powers – you may invoke these to get a bonus to your rolls or make a declaration associated with the aspect – Security-experts may e.g. make a declaration to have an escape plan ready. This costs a fate point, which may be regained by compels. The DM may use aspects versus the PCs with compels – by accepting these, they may regain fate-points. So yes, the system awards double-edged aspects that can be interpreted both positively and negatively. We also are introduced to the set of skills available, each of which may positively influence the stunts attempted by the respective player character.

Now this is where the basics stop and the minor SPOILERS begin. The players start with an empty character sheet and NO idea who their character is. Instead, the players get the following questions: “The PC of the player to your right – what is his/her most distinct physical feature? The player to your left: What is your char’s first impression of that character? What common object do you have on your person? – These questions are the beginning in creating a new character – for they all have amnesia and only fragmented disturbing glimpses of memory and seem to be alone in a dirty room with strangers (the other PCs), who also suffer from amnesia. Oh, and a dead body.

From here on reign the SPOILERS. Potential players should jump to the conclusion.

Still here? All right! As the PCs escape from the police, they will be faced with the surreal surroundings – turns out they are in the “City”, which is encompassed by the “Dome” – a Victorian, strange noir dystopia and closer environment. And they better find out who (if any of them) killed the man lying in the room. From properly escaping to fighting the police to the very real possibility of being imprisoned, there are a lot of possible things that may happen. Much a player-driven setting, we also get multiple further leads that lead to either the house of the deceased or to a boarding house – beyond these, a chance encounter with a madman who may know the truth behind the strange conspiracy…or just ramble on with just false information.

So what is the Dome about? Do you get those “Dark City”-flashbacks? (If not, go watch the movie before running this!) Here, I might go on to depict the intricate layer of mystery that this book weaves – and quite probably fail at it. Why? because, while there IS an underlying plot including a great adversary, the action remains impressively player-driven. While many factions and NPCs  add their own motivations to the fray, the plot itself is surprisingly layered and versatile – for the PCs not only will start to be hounded by strange inhuman monstrosities and contact various factions – all of which seek to use the PCs for their own more or less nefarious ends – worse yet, as the noose tightens and the sheer wrongness of the setting slowly hits home, the memories of the PCs will slowly return – and they are not reliable.

However, these memories are actually extremely ingeniously entwined with the FATE-rules-system: There are TRUE aspects – these reflect a sort of component of the character’s true nature and these allow the respective PCs to bend the laws of physics and do superhuman stunts, but at the cost of their sanity… All while the somewhat trans/inhuman masters of the Dome play their inscrutable gambits for power, change or retaining the status-quo: The FATE of the Dome hangs in the balance indeed… But the endgame, as befitting of such a free-form setting/rule-system, is very much up to the players and the DM – the mystery’s yours to shape and a vast chapter on locations, characters and associated memories should make sure that the imagination of all but the most burnt-out DM should brim with ideas galore for how to end this epic journey.

Speaking of running this – copious advice on steampunkish anachronisms, noir mood, lovecraftian horror and how to entwine these and emphasize different aspects, on how to handle the fluidity of memories – all of that is covered. Better yet – ways to “grit-up” the experience, changing and emphasizing aspects (haha) and themes – all of that and beyond, both rules and the dome, are provided for the DM. We also get 6 player-handouts, a glorious map of the Dome and a char-sheet as well as the index to improve the overall playing experience. And no, I’m NOT going to SPOIL all the details of the story and how it may or may not turn out – in order to experience that, you’ll have to take a look at the Demolished Ones yourself!

Editing and formatting are top-notch, I didn’t notice any glitches. Layout adheres to a drop-dead gorgeous b/w-2-column standard and the pdf comes fully bookmarked. let me talk about teh art a bit – it’s b/w, it’s all by Hugo Solis, and if that name doesn’t ring a bell – he is one of the most prolific and talented artists working in the industry right now. These drawings are AWESOME, oozing both familiarity and wrongness, capturing and enforcing a distinct visual style unique to “The Demolished Ones” and…well, rendering the book simply awesome to look at. The pdf comes with extensive nested bookmarks for your convenience. The product also comes with an extra-pdf of char-sheets.

I rambled and ranted on how I don’t like FATE. Did that change? No. I still consider the rules-system to be reductionist, don’t like it and vastly prefer e.g. Pelgrane Press’ GUMSHOE for investigative-heavy scenarios. HOWEVER: I spite of my complete and utter disdain for the rules, I actually really, really want to run this. “The Demolished Ones” actually has succeeded in taking rules I don’t enjoy and turn them into the form of a supplement with a setting so compelling, so unique, so intricately interwoven with the rules, that I do think that I’ll convert it but rather instead run it in its presented and intended form – where in a regular story, I’d consider the rules an impediment to my enjoyment and the story, here they actually improve it, enable it and make it almost palpable.

Creepy, distinct and masterfully crafted, I can’t fathom how awesome this setting must be to people who actually ENJOY the FATE-rules, when even from my own point-of-view, I’m blown away. Designer Brian Engard has crafted a truly superb supplement here and one that has shown me as a detractor of the system, that there are actually stories it tells exceedingly well. I’m somewhat stumped how well this book works and entwines narrative. set-up and crunch and can only recommend from the bottom of my heart, to check this out, even if you’re a skeptic of the FATE-system or even, like me, someone who actually actively dislikes it – when a supplement is good enough to broaden one’s horizon with regards to a particular rules-set and how it can be used while also providing a thoroughly captivating read – well, then we have a product on our hands that does indeed deserve 5 stars + my seal of approval: Harder won than about 99% of products I’ve ever reviewed, this supplement leaves you essentially no choice but to love it. It’s that good and should provide a distinct, cool alternative. Get this. There are not many supplements out there that can pull off such a stunt.

You can get this disturbing, cool setting/campaign here on OBS and here on d20pfsrd.com’s shop!