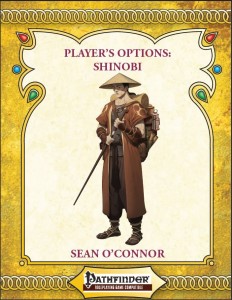 This installment of the Player’s Options-series is 10 pages long, 1 page front cover, 1 page editorial, 1 page SRD, leaving us with 7 pages of content, so let’s take a look, shall we?

The Shinobi base-class gets 3/4 BAB-progression, d8, 6+Int skills per level, good ref- and will-saves and proficiency in simple weapons, kunai, shuriken, bo staff and shinobigatana as well as light armors, but not shields.

The shinobi gets a cover identity at 1st level and an additional one at 5th, 9th, 13th and 17th level – said identity can be assumed via a disguise-check in 1 minute. The things is – the “ability” specifies that wielding weapons blows the cover – why? Some identities may actually REQUIRE weapons to properly portray. Also – what’s the benefit of this whole ability? It doesn’t do anything beyond regular proper uses of disguise on its own and essentially just works as a prerequisite for setting up other shinobi-abilities. I’m honestly baffled what this ability’s benefit (on its own) is supposed to be – maintaining the identity does not confer any bonuses – it’s just fluff. Shinobi also get 1/2 their level to Bluff, Disguise and Sense Motive. They may also improvise disguises in a mere 1d4 rounds – at -15. At least the penalty slowly diminishes by -5 increments to -10 at level 9 and -5 at level 17. But the thing is – at these levels, magic (items) do the disguise MUCH better already, allowing for full-blown transformations. Not sold, even though at 2nd level, they may make cover identity-related Profession and Knowledge-skill-checks as if trained + 1/2 class levels and at 3rd level, they may bluff truth-detecting magic while under cover. At 4th level, the ability-array starts to make sense, as the shinobi learns to change even alignment auras to match the cover personality.

At 4th level and every 4 levels after that, the shinobi also becomes a master of an exotic weapon. At 2nd level and every 3 levels thereafter, the shinbi gets a sneak attack progression. Poison use, skill bonuses and at 10th level, death attack, complement the picture of the secret agent/deep cover assassin.

Now I mentioned ninjutsu techniques – and these do include improved horsemanship, better bo-staff fighting, a lesser form of iaijutsu. Over all, these abilities are neat – though the shuriken specialization that nets +1 shuriken + 1 for every 6 levels may be rather powerful when handled properly. The capstone nets a relatively bland 4 ninjutsu tricks.

We also get 3 new shinobi weapons and 8 new feats – weird here – two feats allow for essentially what the poison use class feature already does. Oo Rather cool would be the option to disguise the effects of poison to make them more subtle. The other feats are actually nice!

We also get a half-elven shinobi as a sample level 1 character/pregen.

Editing and formatting are very good, I didn’t notice any significant glitches. Layout adheres to PDG’s 2-column b/w-standard and is rather printer-friendly. The pdf comes fully bookmarked for your convenience.

Sean O’ Connor’s Shinobi is actually a nice a take on the secret agent style character, with per se interesting abilities, versatility etc. – as a ki-less ninja/rogue-like character, it works well within in cultural context. BUT: The disguise. Seriously, it’s a tad bit too hard for a class this focused on it – why not offer some unique bonuses? High-level mystic enhancements? And why does it suffer from the HORRIBLE weapon caveat? I get the intention behind it, but it makes neither sense in-game, nor is the class so strong that the DM needs to enforce this at times senseless crippling of the central feature of the class. Note that my verdict will IGNORE the weapon-caveat. It’s just unnecessary and I encourage you to do the same. Why? Because the class itself is actually fun!

If you take that away, you actually get a solid, fun class that should be considered a nice, more down-to-earth alternative for the ninja, well worth a final verdict of 4 stars.

You can get this nice class here on OBS and here on d20pfsrd.com’s shop.