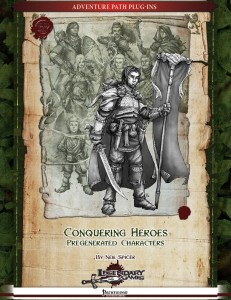 This collection of pregens is 31 pages long, 1 page front cover, 1 page editorial/SRD, 1 page how to use,1 page author bios, 1 page back cover, leaving us with 26 pages of content, so let’s take a look, shall we?

Each of these pregens specifically crafted for the Kingmaker-AP by Paizo comes with a one-page artwork of the character including a sample quote, while delivering statblock etc. on the second and full-blown story on the third page. The stats come with information to scale their standard 20-point build down to 15 for people like yours truly who prefer a bit more grit. It should also be noted that several pieces of roleplaying advice are provided for each character, helping you get into the respective characters rather quickly.

Beyond the builds themselves, it is also the background of the respective characters, which at least to me, makes or breaks these pregens, so let’s take a look at what we get!

Arkadyus Sakharov, born a bastard and favored son of a noble trapped in a loveless marriage, with optimism and work, seeks to craft a place to call home and ascend to his rightful place while keeping out of the reach of his father’s unpleasant other offspring.

Davor Hestruk, a half-orc cleric of the god of battle, born and raised by orcs, seeks a new nation rather than trying to embark on the futile task of fitting in an existing one, whereas the treesinger elven druid Faunlara Deadys has only recently discovered her dryadic ancestry and with elves communing with those beyond the bright veil, the campaign’s development will almost guarantee and interesting development with this character.

Better yet for Faun (as she introduces herself) – her Plant companion Ornmeil’lon – a sapling treant companion, also gets a gorgeous artwork and stats. The gnomish sorceror Hulgrim Underspool is not only well-spoken and grew up among the high society, he also lost his uncle to the gnome’s racial curse (or something different?) and hence the well-spoken man set out to discover more about the origin of his uncanny sorcerers powers.

Pollyna Shuryon caters to those not looking for a standard race -as a slyph rogue (bandit), she hails from the northlands beyond the bright veil, left at the hovel of criminals and bred into a life of crime, surviving her initial foster parents as well as many children, only to see her home change for the worst. Finding her consciousness, she left the bandits only to get framed for crimes she didn’t commit – no loose ends…

The cavalier Pyotr Maartis was born into the noble bloodline -as a true scion of his house – only issue was, he’s the fifth child. Bullied by both his brutal father and siblings,  he fled into glories past of his grand-father’s and other ancestor’s doing and when finding a charter, he saw his chance to inspire a new generation while making a difference in the world and find a place beyond the joyless house of his upbringing.

Quinry Kimm, the half-elven court bard on the other hand may be a paragon, but looks for ways to earn a  title other than by proxy or birth in the opportunity the Stolen Lands represent – armed with both acerbic wit, lute, bow and rapier, he’s more of a seeker of fame and fortune. Definitely more so than the final pregen, Radomir Lytkin, an abjurer wizard and son of a carpenter. Recognized for his genius, the young man was apprenticed by a travelling wizard and led to a prestigious school. There, he did not fit in well and when news of his home being razed reached his ears, he flaunted his masters and left for the lost lands -seeking vengeance or just the reason for the wanton violence and with his keen mind, he’s bound to find the truth.

The final page contains paper-miniatures of the characters.

Editing and formatting, as I’ve come to expect from Legendary Games, are top-notch – I didn’t notice any significant glitches. Layout adheres to Legendary Games beautiful full-color 2-column standard with waxen seals making for great highlights on the pages. The pdf comes fully bookmarked and Hugo Solis provides us with GORGEOUS b/w-artworks for all the characters – not full color, but if you’re familiar with Hugo’s work, you’ll notice the lack of color doesn’t detract from the appeal here. The pdf comes in two versions, with the second being slightly more printer-friendly than the other.

Author Neil Spicer knows how to write concise and cool characters and even when not used for pregens, these might make great rivals or NPCs – scavenging artworks and background is a great alternate way of using this pdf. All in all, these pregens are solid and fun – though honestly, I would have enjoyed slightly more archetype-usage and/or some unique angles. Mind you, I’m complaining at a very high level here and in the end, my only complaint is that one and the lack of a witch – perhaps it’s just me, but the stolen lands always screamed “witch” to me. Beyond that, I would have loved some more intricate potential connections between the pregens that establish a sense of camaraderie from the get-go, but oh well – not enough to justify rating this down below its well-deserved final verdict – 4.5 stars, rounded up to 5 for the purpose of this platform.

You can get these cool characters/pregens here on OBS and here on d20pfsrd.com’s shop!