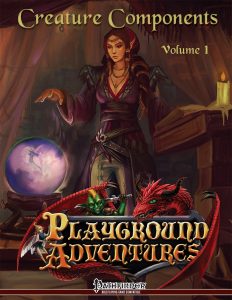 This massive book clocks in at 58 pages, 1 page front cover, 1 page editorial, 1 page inside of front cover, 3 pages of detailed ToC, 1 page SRD, 1 page back cover, leaving us with an impressive 50 pages of raw content, so let’s take a look!

This book has been moved up in my review-queue as a prioritized review. I actually have had quite some time to digest the pre-release version (with only layout missing) and tried to get the review done before my trip. Alas, there were some delays and thus, the final version only hit sites after my departure. I do have a policy to cover only finalized books with proper reviews, though, and thus, I did the only thing I could – sit down and type away at this review whenever I had the chance – in the evenings, after a long drive; in the breaks; when my lady was at the wheel. I don’t have my laptop with me, so please bear with me regarding any glitches/typos. This is pretty much the raw on-the-road edition of reviewing. 😉

All right, that out oft he way, this begins with a flavortext in character that renders the book a nice read – and the flavortext, at least form e, has a touching component, but let me elaborate. Once in a while, Rite Publishing’s late mastermind Steven D. Russell would go one step above and beyond in his 101-series. Sometimes, he would deliver a book of raw creative potency that blew even the generally very high standard oft he series away – this book is, in dedication and also in flavortext, a nod to his creativity and person, as it employs the proper appellations and nomenclature; in a way, this book is a take on his concept of power components and special materials, a book he never had the time to write, but always wanted to.

So what are these components? Well, there is a disjunction in d20-based roleplaying I never was too comfortable with – said disjunction would exist between the huge diversity of critters that exist fort he game we all love and cherish and the non-information; nay, the sheer mundane nature of how their vanquishing is handled. Think of Sigfried/Sigurðr – bathing in dragon’s blood rendered him nigh-unstoppable. Think of Hercules and his golden fleece; of the medusa’s head; oft he basilisk’s blood and the manticore‘s stinger; think of a wyvern’s poison…think of all the hundreds of glorious remnanty of fantastical creatures our own mythology has bequeathed upon us…so why in all hell is defeating such foes so mundane in Pathfinder and similar systems? Where is the gravitas, the „realism“, the magic? The components used herein elevate defeated foes from being simply collections of XP with a mechanical coating. The pdf does this in a variety of ways, so let’s examine them.

Number one would be the use as optional power components – using a component to enhance a spell. Number two would be to aid the creation of magical items…but before the components can be used in any way, they have to be harvested. A simple table and guidelines, with CR as guideline and associated prices provided, does offer a massive help for any prospective GM who wants to add a slew of Geralt of Riva’s fantasy aesthetics to the game. Beyond even that, essence vials for capturing parts of ephemeral creatures and the willing gift of components is covered herein as well. Concise guidelines are provided to help the GM handling creature components in a given game.

For purposes of spellcasting enhancement, the pdf provides several broad categories that help classifying the components and their effects on spellcasting – and yes, they do take into account the variety of prepared vs. Spontaneous spellcasting, as just one example; optional, GM-controlled downsides for grittier games are mentioned as well and using items to modify magic items or reduce the cost of creation provide a truly concise and comprehensive framework to make the process as smooth as possible: A GM who wants to steer his group towards a certain module that features foes the PCs are reluctant to engage can thus easily employ these components a spart oft he treasure of even main objective: In order to break through defensive dweomer XYZ, you will need that ettercap’s silk-spinnerts…

So, this would be the basic framework the pdf offers – sufficient to generate a ton of material and ideas for adventures, for whole campaigns, even. However, the main meat oft he book does not lie within the general, but nevertheless interesting guidelines presented thus far – no, it lies in the massive catalog of components featured thereafter: we basically take the first Pathfinder bestiary and its creatures and provide components for them. Andy es, aasimars are included; and no, you can’t „milk“ these fellows- the non-abuse/GM-control clauses in the general section make sure of that and even provide a reasonable justification in the spiritual component required for these items to work. Trust me, it makes sense as featured in this book.

Anyways, we begin with aasimar blood, which can add Flaring Spell’s effects to any spell with a light-descriptor. If you’d expect now a one creature, one component breakdown oft he material herein, you’d be surprised to realize that there is often more than one component provided – aboleth mucus and cerebral fluid are included as two components, for example; similarly, while angel blood does have general properties, the individual creatures and their vital fluids actually offer different tricks fort he discerning user. The modifications often feature metamagic effects or a cost reduction; however, it would be a gross and unjust miss-characterization of this book to only expect cookie-cutting effects; quite the contrary, actually.

Let’s stay with „A“ for a second and talk about the ankhegs, some of my favorite critters; Their saliva, when used to cast a spell with an acid-descriptor, increases the damage-die type by one step (max 1d12); however, when used to enhance a spell of 3rd level or lower, the user also becomes immune to acid damage for 1 round upon casting the spell, adding a brand new tactical dimension to the casting. How is such a component presented? Well, we have an alphabetical listing, with the general potency (as introduced before), component class (think oft hat as the type oft he component) and spell that can be augmented noted; similarly, prices have been provided. Whether you employ balor essence or horn makes a significant difference in use, for example, though both are components with a potency of greater.  Want to enhance a spell or effect that causes the nauseated or sickened condition? Hezrou sweat is the way to go! Replacing caused diseases with devil’s chills? Possible. If you add mimic spittle to spells that grant DR or an increase to touch AC, you may also increase the CMB for grapple purposes…well, I could go on like this forever. Basically, this book takes the essences of creatures and codifies them in a quasi-alchemical component system that makes the creatures feel more…well, alive. Believable.

Speaking of which, notice how I mentioned that the x-blooded races would be kept in check to avoid the abuse of harvesting components? Beyond feats that build on the system presented herein, there also are feats that allow a character with a certain bloodline to properly harvest his own blood, but thankfully with a proper cap.

This is, however, not even close to the totality of what this book offers – in the spirit of „waste not what you’ve killed“, the book also features a significant plethora of magic items based on components as well as variants of existing ones reimagined within the framework of this book; suddenly, the cloak of resistance is no longer the most boring magic item ever, but „the item we made from that owlbear that almost killed Yorvan“ – but beyond that, e.g. a remorhaz forge deserves special mention…sans fuel, fantastic…and absolutely stunning to look at. Look at? Well, guess what? This is the first Playground Adventures book not specifically targeted at a younger audience and oh boy, it is BEAUTIFUL. As in „Usually, we only see that in Kickstarters“ level of beautiful. The component section features several quasi-anatomical renditions that evoke the spirit oft he classic Vetruvian man and real life bestiaries. (In case you didn’t know – in less enlightened times and long before even daguerreotypes were a thing, cataloging of creatures both mundane and fantastical was done in such tomes.) In the item-section, the artistic style is deliberately changed to provide renditions of many oft he items included in stunning full-color; and we’re talking about the same quality as the cover. Yeah. This book is BEAUTIFUL.

But I digress – note how I mentioned the famous Sigfried myth? Well, in the end, even some special properties may be modified…so yes, actually using dragon’s blood to enhance your armor will yield results…

Editing and formatting are very good, I noticed no significant hiccups and, considering the length of this book, that is quite a feat. Layout adheres to a gorgeous 2-column full-color standard that blends well with the aforementioned glorious art-direction of this book: Jocelyn Sarvida’s art complements BJ Hensley’s layout really well. The pdf comes fully bookmarked for your convenience with individual bookmarks for all critters, making navigation really comfortable.

Daniel Marshall’s books so far have always had the right creative spark, but stumbled somewhere along the line; I’m not sure if the development by Stephen Rowe or just a natural growth as a designer or both are responsible…but guess what?

THIS IS AMAZING. Congratulations are in order!

In case you were wondering – the above all, in some extent or another, holds true for me. This book is a touching monument, a great tribute and beyond that, it frankly is one inspiring tome. Honestly, even before all the „OMG, it is so beautiful“-artwork and layout, I read the plain ole‘ doc and was grinning from ear to ear; to be honest, it’s one reason I managed to sit down after hundreds of miles at the wheel, dead tired and write this.

I wanted to draw attention to this gem. Immediately. This book is a fantastic resource for groups of all ages, for various games; it is an exceptional resource that very much will become a default staple in pretty much all of my games once I return home. There is a chance you just want to kill things and their names and flavor don’t matter to you; perhaps you’re fine with just nameless, mass-produced cloaks of resistance – that’s fine, I don’t judge. But you’re missing out on something wonderful.

I will always prefer the item with the story, the personal attachment. I will always adore the smart caster from our novels, the one who has the component tool to modify his spell in unique ways. This book provides all of that. It may be a crunch book, but it, like the late scribe Russell’s offerings, is a great read and manages to inspire.

So please, please, please – if what I mentioned above even slightly resonates with you, take a look at this, buy this and support Playground Adventures so weg et more. I know that I can’t wait for Vol. II and hopefully a lot, lot more – this is very much the innovative,game-enhancing crunch book we need. To paraphrase Saint-Exupéry, this book is very much the spirit breathing upon the clay oft he mechanics to create more soul for both items, magic and creatures. There is narrative potential for years in the system presented here and I absolutely love it to bits. This book is stellar and deserves a final verdict of 5 stars + seal of approval, is a candidate for my top ten of 2016 and receives the EZG Essentials-tag.

You can get this fantastic book here on OBS!