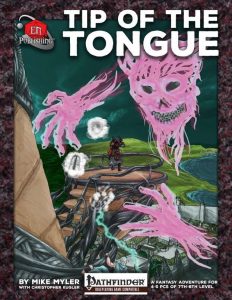 This module clocks in at 45 pages, 1 page front cover, 1 page editorial, 1 page SRD, 1 page back cover, leaving us with 41 pages of content, so let’s take a look!

This is a high fantasy adventure for characters level 7 – 8, and takes place in a town steeped in magical academia – the city Bellek. We get a proper settlement statblock for the town, and the magical nature of the place is emphasized throughout: A whole list of magical alcohol for the obligatory starting tavern, for example, has been provided. As a minor nitpick, there are a few inconsistencies in their rules, though these remain largely cosmetic and don’t impede functionality. (Electrical instead of electricity damage, for example.) The starting angle has a couple of hooks provided, and the module does not come with cartography for the town or locations visited. The module pretty heavily references the NPC Codex for less crucial foes/NPCs, so having that, or the SRD-pages ready is suggested. If you own the Liber Influxus Communis, you’ll be interested to hear that the mnemonic class features somewhat prominently in this module. If you don’t have it, fret now, for all relevant information is provided.

All right, you know how this goes – from here on, the SPOILERS will reign, as I discuss the module in detail. Potential players should definitely jump ahead to the conclusion.

All right, only GMs around? As the PCs arrive in town, they’ll spot the guards sweating in winter armor – and indeed, as they explore the spire of knowledge, they’ll have an…interesting time, as anything short of a DC 10 Stealth check will be met with shushing sounds – and the PCs may well be escorted out of the place after 5 failed consecutive checks. This can be hilarious for your group, but be careful when running this RAW, as it could similarly frustrate players. Anyways, at the top of the spire, the PCs get to meet Hirsli Aptal, a mindchemist who may have a brilliant mind – but also has puzzling news: obviously, the keenest minds, particularly nobles et al., have recently been struck by an odd wave of amnesia, and Hirsli is beginning to suffer exactly the same slips of memory. Something is amiss, and PCs willing to investigate the matter get a badge that should help during the investigation. (Btw.: Attacking her is a bad idea – book golem…)

Investigating Aptal manor, the PCs can find a secret passage in the treasury that leads into the tomb of Ipo Aisun-Aiji, a mnemonic from days gone past that sacrificed himself to end the threat of a horrid entity – Mitk’. Alas, as often the case, Mitk’ wasn’t destroyed, and has since found a mad apprentice/prophet of sorts in the eleven oracle Kit Mha, who has placed clues that allowed Hirsli to break the cipher of the Kitabu Mitk’ – a grimoires now hidden below, ready to be unleashed upon the adventurers. The tomb of Iso Aisun-Aiji is btw. a magical labyrinth full of yithians and the like – now maps or puzzle helps solve the maze, which is a bit of a downside – particularly since failing a skill check and traveling willy-nilly can cause ability score damage. As written, this is a clear example of PC skill over player skill use.

Returning the book to Hirsli, she creates a concoction that cures the amnesia – and that’s it, right? Wrong. The PCs do get to meet King Halfviti (lol), and in the aftermath of a feast, an assassination will be carried out – hinting that not all is well, and indeed, a mysterious killer named Kurtaric manages to (probably) get away. Thing is, there is an invasion looming, and 3 nearby settlements, and thus, the PCs are sent out to gather armies, while the old killer attempts to strike if an opportunity presents itself – but not all is as it seems: The old warrior finally opts for parley, and just as he talks, he is struck dead – and with his death, his ritual fails: the old mnemonic attempted to isolate and contain the spread of the idea of Mitk’, eradicating the idea the PCs helped to inadvertently spread.

The game is on, as Mitk’, as a deadly idea of sorts, now has reached critical saturation – a war for ideas, fought with mass combat rules, against the gruesome vergeten –and, obviously, Mitk’! Ultimately, the PCs may, courtesy of special (and seriously potent for the level) weapons, triumph – these special weapons, oddly, have no value, but instead use a charge-like mechanic and quickly decrease in power. Still, it’s something to keep an eye on.

The pdf comes with extensive statblocks and army stats.

Editing and formatting are good, though not perfect. I noticed a couple of minor hiccups, though no game-breakers per se. Layout adheres to a no-frills two-column standard with few colors and a white background – the module is pretty printer-friendly. The interior artwork is a blending of nice original pieces and fitting stock art, in full color and b/w, respectively. The pdf comes fully bookmarked for your convenience. No cartography is provided, which is a slight comfort detriment.

This module, penned by Mike Myler and Christopher Kugler, is per se amazing in many ways – the ambition and story is grand, and particularly the climax can be amazing – if you draw the battle-field, etc. The module also suffers a bit from its scope and what it can accomplish in it – this feels like a trilogy of adventures, jammed together into one: Act I, the investigation and dungeon – the latter of which is pretty much glossed over and could have used a more rewarding solution. Act II, as the gathering of forces – the traveling and locations could have used more time to develop the threat amassed…and thirdly, the showdown, which has all the makings of an epic finale. The third act works best here, but even it could have used a bit more room to shine. Don’t get me wrong – I enjoyed this module, but it does require some serious fleshing out by the GM to truly realize its potential. And I really, really wished it didn’t rush things like it did. As provided, the narrative weak points are the exposition dumps at certain stages, which, to me, felt like a necessity for the sake of remaining briefer than the material would have warranted. This module is not bad, not by a long shot – but, frustratingly, it has all the ingredients of being a great epic, condensed to a briefer presentation form that slightly hurts the module.

That being said, my final verdict will clock in at 3.5 stars, rounded up for the purpose of this platform. If you don’t mind doing lots of fleshing out, then this might make for a grand and rather epic experience for you and yours!

You can get this high-concept adventure here on OBS!