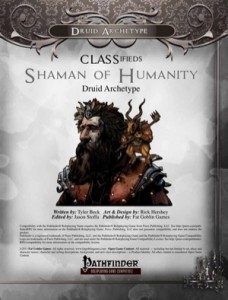 This druid archetype clocks in at 9 pages, 1 page front cover, 1 page SRD, 1 page advertisement, leaving us with 6 pages, so let’s take a look!

The shaman of humanity is a druid archetype that is available exclusively to those with human ancestry (including half-breeds). They alter their proficiencies and may actually wear metal armor, but also receive slightly diminished spellcasting. Their empathy only applies to domesticated animals or those under the effects of the anthropomorphic animal effect. Unlike the regular effect, though, the shaman learns to cast this as a spell-like ability that lasts for quite some time on his companion and said companion takes on the proficiencies of the shaman of humanity, which, for multi-class characters, may easily be exploited. While I get the design-intent, just taking on the proficiencies of the shaman of humanity class would have been enough, especially since the animal retains non-limb-based natural attacks such as gore when transformed by this ability – generally, a nice change from the spell. Also nice: Barding and armor and the effects upon transformation are covered (In short: Barding changes, armor donned while anthropomorphic does not), as are suggested lists for summoned weapons for anthropomorphic animals.

The shaman’s animal companion gets quite a power-upgrade in the guise of a selection of rather nasty bonus feats – for which the animal needn’t fulfill the prerequisites. This caveat makes quite a difference and not one I’m comfortable with in all cases, to be honest.

Summoning anthropomorphic animals via nature’s ally is fine with me, though honestly, it could have been worded a bit tighter – as phrased, the ability implies that summoning nature’s ally is only freely anthropomorphized when cast spontaneously. Why not provide some small benefit for actually preparing the spell? And yes, that’s a nitpick and not something I’ll hold against the pdf.

High level shamans of humanity may make anthropomorphic animals permanently anthropomorphic and protect one whole community (!!!) via mass sanctuary. Tying that to the settlement size, imposing a strict limit and requiring a very high level means that I actually really like this one. (And no, the truly vast sprawls can’t be protected thus… Still, DMs should take care that not too many of these shamans populate one’s world…) The alternate class, alas, lacks a proper capstone.

We do, however, get two feats, one that allows summoned anthromorphs to come with martial weapons and use them, the other rendering their attacks magical.

Editing and formatting are okay, I didn’t notice significant issues. Layout adheres to Fat Goblin Games’ two-column, full color standard and the pdf comes hyperlinked with the good type of hyperlink and has no bookmarks.

Tyler Beck provides an interesting alternate class, all centered around making one spell work – and it succeeds at that. On the other hand, the class feels a bit thin, concept-wise, to me. Is that all there is to humanity, making animals walk upright and shoving weapons in their hands? Don’t get me wrong, that’s cool and all, but still, I do feel like this class had more potential: Take the community protector aspect, the low level domestic animal tricks and we have areas almost never covered. What about teaching more tricks, and faster to animals? Making domestic creatures stronger? lending some of human adaptability to non-human races? All of this falls somewhat by the wayside, when it needn’t have. The companion with the extensive feat-selection proved, in-game, a tad bit too strong in playtesting, at least for my tastes. The ability to ignore all prerequisites for the bonus feats is nasty and their int of 3 means they no longer require tricks to handle. With a slight nerfing of the companion in favor of a more diverse skill-set (community focus sooner, not as powerful, for example…), this class would have rocked hard – as written, it feels a bit niche, one-dimensional and slightly too strong. In the end, this is not a bad choice, but neither did it blow my mind or could be considered sans its flaws. My final verdict will clock in at 3 stars – a solid, perhaps too tightly focused class.

You can get this archetype/alternate class here on OBS and here on d20pfsrd.com’s shop.