EZG reviews Plight of the Tuath I – Feast Hall of Ash

Plight of the Tuath I – Feast Hall of Ash 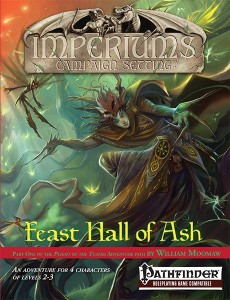 This freshman offering of Mór Games clocks in at 80 pages, 1 page front cover, 2 pages of editorial, 1 page ToC, 1 page SRD, 1 page advertisement, 1 page back cover, leaving us with 73 pages of content – quite a bunch, so let’s take a look at this!

After a short introduction, we’ll immediately jump into the meat of the module, but before we go there, let’s first get some basics out of the way: First of all, there are some (but by no means many) alternate suggestions to make the module more challenging – a good feature and one I hope to see further developed, if mainly due to my players being generally bored by standard difficulty modules. Less experienced DMs benefit from copious advice-boxes interspersed throughout the module, which would be another plus.

All right, so the following contains SPOILERS. Potential players should jump to the conclusion.

Still here? Good! The once proud Tuatha De Dannan, the elves, have been warring against the dread Fomoire – and ultimately lost, retreating into sacred trees concealed from the Fomoire and their bloodthirsty god with powerful magics. Bereft of their foes, the Fomoire turned their attention elsewhere and went away – and peace returned to the forests. Unfortunately for the PCs and anyone in general, this period of calm is about to come to a harsh end – or rather, already has, for we kick off this adventure in medias res, with the PCs being captured and caged by the vanguard of the Fomoire’s host. The PCs are led to their cages, witnessing their grim doom in a sacrifice performed, driving home the importance of escaping – preferably soon.

Thankfully, during the night, a Tuath, the elven wizard Philiandrius contacts them – he’s a fellow prisoner and still has spells memorized, but alas – no component pouch. Oh, and he’s next in line for sarificing – and can help as a tool for the DM to help the PCs plot their escape – unfortunately for the PCs, before they can enact an escape plan, their adversaries nail Philiandrius’ to a tree, ruining his hands (yes – ripped off Fingers…ouch!) – and thus, his arcane prowess. On the plus side, a window for escape presents itself soon, and provided the PCs prevail against their captors, they are free – alas, the boats are coming and they better warn their home (or otherwise treasured settlement) Iria. Philiandrius, now honor-bound to help them, pledges to defend the village with his arcane might – but in order to do so, the PCs have to seek out the near-mythical healer called “Ash” in the woods -before the Fomoire’s bloody swath cuts their home to pieces and obliterates the souls of their kin and friends.

So the PCs are off through the Loc-Sil forest, where they’ll encounter a lycanthrope woodsman (lycanthropes are nature spirits here, bound to people, and eternal adversaries of the otherworldy intruders known as fey…) -a conflict neatly showcased by the woodsman slaying a fey and transforming into his alternate form, as the nature spirit takes over. Rather cool – the map provided for the encounter has moonlight-bathed spots, in which the lycanthrope’s prowess grows. The PCs may also encounter a bunch of children playing tag while chanting a weird rhyme – which is btw. fully depicted.

Meeting a bunch of unnerving (but benevolent) grigs (who probably don’t understand the PCs) will point the PCs toward the Feast Hall of Ash – unfortunately, the little fey seem to be hesitant to go there. Why becomes apparent upon mentioning Ash to the fey- guards, so-called Ballybogs, for they immediately attack! Defeating the leaves Ash free to exit his tree – he was a powerful fey; at least before one Lord Armillaria took over his feast hall.

In order to save Philiandrius’ hands, the PCs will have to retake the feast hall that has been taken over by the Niseelie, entering the strange domain of the fey. In order to pass this place, they will find quite a few interesting challenges – what about a game of story-telling, for example? And yes, we get rules for that. Also interesting would be that the children’s chant and superstitions/folklore generally hold power within this setting, meaning tidbits like this actually matter also on a mechanical level. These are represented in so-called emergences that the PCs may receive – these can be lost as well, though – provided the PCs violate their tenets or don’t properly roleplay them. Nice! Speaking of nice – a lot of the fae encountered herein come with disturbing and playful, often unique abilities that really help drive home their alien nature -also in their often not necessarily violent interactions with the PCs.

And yes, games of wits and dealing with sluaghs are part of the deal – the latter trying to coup de grace you and steal your lower jaw… Lord Armillaria in the meanwhile has a counterproposal for the PCs, asking them to kill Ash to have him heal Philiandrius -whatever the PCs decide (and provided they don’t fall prey to the creature the chant warned about…), they’ll get the appropriate emergence, allying them with a court. With the mage’s injuries healed, the PCs have to race to Iria and prepare the town for the waves of Fomoire about to come crashing down on the little town.

Now here, I do have a nitpick – the preparations are problematic – using caltrops nets you a +1 to hit? That’s not how caltrops work…and most of the benefits listed here DO NJOT conform to how such things are handled in PFRPG – concealment/cover etc. are also non-standard…and at times nonsensical: Why do archers on the roof get +2 to hit, whereas slingers on teh same roof get +2 to AC instead? Unfortunately, almost all of the preparation tactical advantages for the finale suffer from these glitches -here a new consulting of the respective rules would have helped. Other than that, the finale is rather challenging – or would be sans Philiandrius. The elf is simply too strong – circle of death, fireball, wall of fire – in direct comparison, the Formoire almost could evoke pity. This guy doesn’t require the PCs to help in the finale. While the module has him take care of the majority of the hostile force, with the PCs guarding the villagers, this still feels somewhat anticlimactic – having the big bad elven wizard around the corner to step in to save you just doesn’t feel that heroic to me. A DM should take great care to avoid stealing the show of the PCs…

The appendices contain the stats and portraits of the key NPCs, the town’s statblock, aforementioned supplemental rules, various, lavishly detailed magic items (that really feel magical!), with one class even scaling throughout the levels, 10 new creatures found in the module, 4 pregens (all with original pieces of art) and a final page, on which short primers of NPCs alongside their pictures can be handed out to players – nice!

Editing and formatting are very good, though not perfect – while I didn’t notice grievous glitches, some minor formatting glitches can be found. Layout adheres to an easy to read two column standard in full color, with key rules-information usually bolded for extra convenience and internal hyperlinking to e.g. the storytelling game depicted in the appendix. The pdf comes fully bookmarked with copious, nested bookmarks for maximum convenience. The artwork provided in here deserves special mentioning – all beautiful full-color and original, the individual pieces go well together and help evoke the sense of antiquity the module strives for. The maps are nice as well…but not particularly functional – one encounter map with fight-influencing terrain, for example, could have really used a large, player-friendly version – which holds true for all maps herein, really: Player-friendly maps in the appendix to print out and slowly uncover as the players progress would have imho helped – especially since per se, the maps are neat!

I did not expect to like this module. Yet *ANOTHER* setting? Oh, and with fey? Yeah, I’ve seen a lot of those – and excellent ones at that. If the frame of reference you compete against is “Courts of the Shadow Fey“, you have a herculean task indeed. And guess what – author William Moomaw actually does a splendid job! Showing a distinct understanding for folklore, for what makes fey tick, this module reminded me of “Tales of the Old Margreve” in all the right ways, while still offering a superbly written, exciting, alien module, suffused with Celtic/Gaelic influences that seem to dominate the setting, lending itself not only to a sense of antiquity, but also to a surprisingly fresh take on fantasy module writing.

To give you a point of reference – this module actually has me stoked to learn more about the setting, with folklore, mini-games and emergences making for great cues of the things to come. Furthermore, the writing of both monsters and magic items also drive home a working knowledge of how to craft magic that actually feels magical.

Is this perfect? No, as a freshman offering, it’s lack of player-friendly maps can be somewhat excused, though it still acts somewhat detrimental in my book. The second weakness would be the somewhat anticlimactic finale of the module and its rules-glitches, which, while not breaking the module, act as further detriments. Now don’t be fooled – this still is a) one DAMN IMPRESSIVE freshman offering with more professional quality than many modules I’ve read and b) still a mostly awesome module, on I can wholeheartedly recommend. I’m already stoked to see the next module and if Mór Games continues to improve, we’ll be seeing some 5 star+seal ratings – due to the aforementioned accumulated minor issues, though, I can’t go any higher than 4 stars on this one. Still, if you like old world-style modules, fey or are looking for fluff that’s not your run-of-the-mill fantasy, then be sure to check this out – it’s one fine module.

You can get this cool module here on OBS and here on d20pfsrd.com’s shop.
Endzeitgeist out.