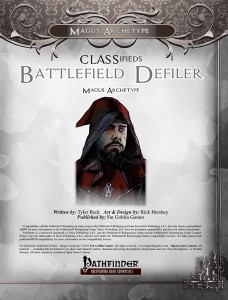 This pdf clocks in at 6 pages, 1 page front cover, 1 page SRD, 1 page about Fat Goblin Games, leaving us with 3 pages of content for the battlefield defiler, so let’s take a look what this magus archetype does, shall we?

Battlefield Defilers must be of evil alignment and get an assortment of necromancy spells added to their spell-list – which includes quite a few powerful spells; Something to bear in mind when thinking about taking this archetype – magi can easily get access to them, so that’s one power-upgrade there – or it would be if this archetype wouldn’t lose Spell Recall and Knowledge Pool. No complaints. Now the archetype also modifies the arcane pool -whenever a battlefield defiler successfully performs a coup-de-grâce on a living target, he may expend a point to cast a prepared spell that creates (explicitly NOT summons!) undead as has a casting time of a standard action or less as a swift action. The spell only targets this one corpse, even if it otherwise would affect multiple target corpses. The weapon of the battlefield defiler can be enhanced with the arcane pool like that of the magus, but receives a different list of properties and may only do so at 5th level onwards. A nice balance with the enhanced casting list.

The battlefield defiler also gets to choose from 3 new arcana that allows them to expend points from their pool to add templates to the undead they create. As a nitpick – one arcana specifies that when using any iteration of undead anatomy, the battlefield defiler is treated as if his spells benefited from silent spell and is treated as having a higher cha-score. This is slightly problematic since the ability fails to specify whether the level-increase of silent spell does apply or not. High level magi may exert energy drains on targets.

In lieu of a knowledge pool, the battlefield defiler gets the option to channel negative energy, but before you scream OP, hear e out – he may only heal himself and undead, not deal damage. 11th level battlefield defilers may keep animate undead-spells in their weapon, not expending them until a killing blow is struck, following the rules for holding a charge. Nice take on a complex mechanic that replaces Spell Recall.

At high levels, a spell-like Undead Anatomy IV and a devastating capstone that creates beheaded make for nice end-game abilities for the archetype.

Editing and formatting are good, if not perfect -I noticed a minor glitch here and there, but nothing that would have impeded my enjoyment of this pdf. The pdf’s layout adheres to Fat Goblin Games’ beautiful 2-column full-color layout and the pdf comes with the good type of hyperlink, even though e.g. the magus undead template has been forgotten among the otherwise great hyperlinks. The pdf has no bookmarks, but needs none at this length.

Tyler Beck’s creations usually take a look at a complex concept and to this date, had mixed success at making them work perfectly. This pdf seems to represent him getting the stuff right – utilizing various complex abilities, the Battlefield Defiler offers a distinct, different playstyle for evil magi that allows them to be the creators of undead in the field of battle, something they quite frankly sucked at before. The nerfing of some of the base magus’ most powerful abilities ensures that the archetype works and the lack of options to kitten-cheese this archetype is a further plus. While not (yet!) perfect, this proves Tyler Beck’s potential and is well worth a final verdict of 4 stars. Good job!

You can get this magus archetype here on OBS and here on d20pfsrd.com’s shop.