From the Deep III – A Dragon’s Orders

From the Deep III – A Dragon’s Orders 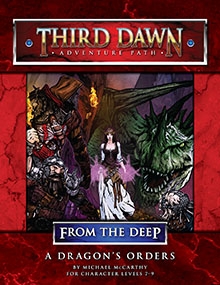 Still here? All right! After a long hiatus, we’re finally back in the psionic AP and we kick off with a cool particular set of changes – the choices made in Part I and II have significant consequences, altering not only the updated statblock of the city of Albril, but also sporting direct benefits that depend on the PC’s choices. When the PCs are called to meet up with the most powerful people of the town, one quickly realizes that things just got real – the city of Lirasse has fallen over night. Now not only will the sudden refugee influx change the very power dynamics of their home, the PCs will have another issue at their hands sooner rather than later. They have obviously finally entered the frame for their antagonists and the conspiracy, with its in-game rules interacting with psionic means of research. Unfortunately for the PCs, this translates into a smear-campaign designed to tarnish their reputation while sowing discord – and yes, the mechanics to track this progression of strife is pretty neat and concise. That being said, this particular frame-job can be complicated significantly by object reading and the DM’s interpretation of said power – the wording of the power is ambiguous enough to potentially break the narrative here, so that would be one very important thing to be aware of.

Still, doing the investigation, spiced with numerous red herrings and challenging combats, all while suspicion rises and the cult of the scaled god’s fanatics rise can make for great adventuring. Defeating finally the mastermind behind the smear campaign, the PCs will also hopefully encounter multiple sabotage plans that have gone utterly unnoticed by the city’s seers – which should more than raise eyebrows. So, off the PCs are – towards the ruins of Lirasse, where the survivors huddle under the cruel rule of the scaled one’s servants. Infiltrating the ruins, past the numerous hill giants and similar threats, the PCs will have ample opportunity to explore what is left of the town…and hopefully find the hide-out of the fanatics behind the fall of the town. From there, a letter points the PCs towards the so-called Maw, from which the scaled god is scheduled to rise…very soon. So yes, beyond the threat of various phrenic scourges and their ilk, beyond animate dreams, the PCs will have to deal with the scaled god and further conspirators – it’s dragon-slaying time, all while the timer ticks and strategies in place to delay the PCs work at full force. Let’s just hope the PCs can end the dragon who has implanted to many fragments of his psyche in the various fanatical soldiers of the cabal…

The pdf ends with a mini-bestiary and a short 2-page campaign synopsis.

Editing and formatting are pretty good, I noticed no significant glitches. Layout adheres to Dreamscarred Press’ relatively printer-friendly 2-column full-color standard and the pdf comes fully bookmarked for your convenience. Artwork is solid full-color, courtesy of Rick Hershey and Tsailanza Rayne and cartography is solid. The lack of player-friendly maps annoyed me, though.

Michael McCarthy has grown as an author – this module is testament to that in that it is significantly more streamlined, more cinematic than its predecessors and in that it sports numerous damn cool ideas that render it much more compelling than I expected it to be. The emphasis on choice and consequence, the multiple ways in which the investigation can be run (fast track, clues, red herrings) -all of that feels pretty much right and is really, really fun. So does, in fact, the way in which the conspiracy operates – the in-game-logic here is pretty smooth and I can definitely appreciate that. On the downside, this module does feel a bit lax when it comes to PC-capability – the players, at this point, will have quite an arsenal and potentially even a small army at their disposal, so some synergy with mass-combat rules would have been appreciated – or at least, some additional benefits. Don’t get me wrong – the module DOES do a great job in making the players feel like their decisions matter – because they do. At the same time, though, I couldn’t help but feel that the significant status, the smear-campaign against them – all of that could have had more consequences.

Which brings me to the relative “weak” point of this module – it tries a tad bit too much in one go. A more detailed murder mystery with more read-aloud text, more complex investigation tricks, preferably requiring specifically some psionic tricks, would have been awesome to see. A more detailed second act, including more escapee-tragedies, a better fleshed out city would have been a nice module of its own. And finally, the end of the module also feels like it could have stood on its own with some expansion and thus be slightly more organic. Now this does not make the module bad by any means – it is functional, exciting even – but when I ran it, I found myself doing a lot of expansion work once we dusted off our From the Deep-PCs. I’m not complaining, mind you, but I still feel like this time around, less would have potentially been more – the module works as a whole, but it feels a bit cramped. Hence, my final verdict will clock in at 4.5 stars, rounded down by a tiny margin to 4 – this definitely is the best From the Deep module so far. I’m looking forward to seeing how this AP progresses!