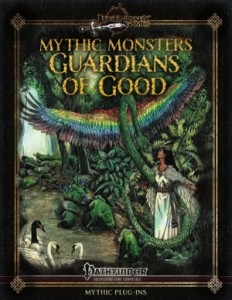 This installment of the Mythic Monsters-series clocks in at 34 pages, 1 page front cover, 2 pages editorial, 1 page ToC, 1 page SRD, 2 pages of introduction, 2 pages advertisement, 1 page inside of back cover, 1 page back cover, leaving us with 23 pages of content, so let’s take a look!

The Mythic Monsters-series usually provides some sort of supplemental material for the monsters presented in a given installment, and this is no different. 8 feats, including, of course, mythic variants where eligible. Among the benefits, one can find the numerical escalation for evil favored enemies and unarmed strikes, better relationships with animals and a pretty interesting one that lets you utilize channel energy or lay on hands to make the effects of an item not hurt good beings while increasing the damage-output versus evil foes – by 25%. I get why this was used, but personally, I’m not a big fan of thirds/fourths etc. as fractions of numeric effects. Another scaling mechanism may have been more elegant here. Speaking of slightly inelegant design – the sacred shape feat, which allows you to wildshape into magical animals only allows that change to work with the analogue of beast shape III and IV, which provides the very much required level-cap; Careless players might take the feat before that, though, as the prerequisites are very lax, thus potentially rendering the feat temporarily inert. That’s me being nitpicky on a high level, though. Still, this feat in particular has pretty serious repercussions for a campaign and personally, I’d be rather careful about allowing it – it’s not for every campaign…

But you’re not here for the feats, are you? Let’s take a look at those monsters! Blink Dogs, at CR 3/MR 1, receive the ability to reflexively teleport away when being hit – pretty cool and makes more than a bit of sense. Even cooler, their dimensional phasing allows them to count as if occupying additional squares, rendering them much more unique – damn cool and a great example of awesome low-CR-monster-design. Mythic Ceru, at the same CR/MR, may utilize mythic power as a resource for their luckbringing. Also at this CR/MR, tritons may use any conch shell as horns of the triton.

The CR 12/MR 5 mythic Couatl can ethereally jaunt to prevents ignobly crashing to the ground, buffet foes with its glorious wings and also receives some partially mythic-power based SPs. Sacred poison and spitting it at foes and dimensional porting grappled foes can be considered a pretty cool move.

Now obviously, we also receive an assortment of metallic dragons – and I’m happy to report that they’re on par with the superb dragons introduced in the dragon-centric Mythic Monster-installment. At CR 8/MR 3, brass dragons may blind foes with their breath and the dragon may designate a word and then become aware of words uttered close to said term. Interesting, though the ability does sport a minor typo. Cool: Mythic power-based charming voice. At CR 17/MR 6, the Brass Dragon is bulletproof (take THAT, gunslingers…) aquatic telepathy and soak up/attract electricity, while also exhaling gas that repulses foes. Oh, and they can make what amounts to miniature maelstroms. And yes, the dragon was made with the giant simple template, so a non-templated abbreviated statblock is provided as well. Have I mentioned the devastating breath feat utilized in the build? Yeah, these guys are brutal.

At 1 CR and MR less,Vopper dragons may make Excalibur and similar magic weapons into floppy prop-like things (with hilarious results) and their banter has pretty cool results…so yeah, like it. At CR 28/MR 10, the Gold Wyrms are beauties – mythic power-drain breath weapon? Check! Substituting divine energy for the fire elemental damage caused? Check. Blinding scales? Nigh impenetrable DR? Mythic power draining crits? Oh yes, these guys are glorious, powerful adversaries. And I have only skimmed over their capacities – the signature abilities alone span almost 2 pages. Yeah. No less beautiful, at CR 23/MR 9, Silver dragons receive a more distinct anti-caster focus, with emphasis on reflective scales being usable to realign targets – per se, the build is great, but after the monumental gold, the silver does pale a bit. Bad pun intended.

Beyond the draconic forces for all that is good and pure, we also get the CR 10/MR 4 Lammasu, who may absorb evil spells into itself and receives some thematically superbly fitting mystery/oracle-ish tricks – nice to see the rules reflect better the mythology! At 1 CR higher, the mythic Shedu is a brilliant representation of the guardian – when in statue form, they can create duplicates of their statue body and move their consciousness from statue to statue, rendering them really awesome potential boss/guardian creatures. I absolutely adore this ability and its cool fluff and crunch – hands down my favorite ability in this book, all supplemented by beautiful crunch.

In the mid area, at CR 7/MR 3, the swan maiden receives the ability to be resurrected by a called valkyrie – love this nod towards mythology. Now usually, the creature uniquely designed for a given mythic monster-installment is a highlight – but conceptually, the CR 9/MR 4 Chiron does not sound so interesting – but closer scrutiny does indeed show some neat ideas. The Chiron, for those less versed in classic Greek mythology, could be pictured as the unearthly supreme centaur, a teacher of philosophy and the young and indeed – the creature does sport superb retraining tricks, is ageless and has a bottomless quiver etc. Being a superb, mythic crafter also works well with the intended role, though I do have some minor quibbles – as the original Chiron was e.g. the teacher of Achilles, among others, a few unique boons granted from the tutelage of these guys would have been nice to see. Finally, while I absolutely adore the glorious full-color artwork, in some renditions, the Chiron has been depicted with forelegs of a human, not equine ones and that would have made for an interesting horseshoe/feet-slot combo-potential, had it a representation among artwork or rules. And yes, I’m aware that this is me being a spoiled, spoiled reviewer. 😉

Jason Nelson got Mike Welham as a co-author for this installment and it does show – when I first read the ToC, I thought “Great, metallic dragons plus filler.” The mythological creatures featured herein tended to rank among the lamer examples of monsters in their non-mythic iterations. I am glad to report that, contrary to my expectations, it was these “plus X”-creatures that rocked my world. The loving care shown to some of these mythological guardians is simply beautiful and, more often than not, they FINALLY receive the magic, the glory, the sense of profound wonder that they ought to have had in the first place. Final verdict? Five stars plus seal of approval, in spite of the issues with some of the supplemental feats!