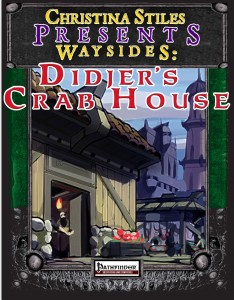 This supplement is 20 pages long, 1 page front cover/foreword, 1 page SRD/editorial, leaving us with 18 pages of content, so let’s take a look!

This being the first in the Waysides-series, it kicks off with an introduction on what to expect from the series – and Didjer’s tavern is just the first – coming with a nice map in b/w and with grid (and, unfortunately, the annoying numbers) as well as copious information on the seedy staff catering to scrupulous clientele. As a major plus, the wayside comes with a menu table – which I applaud. What I don’t consider as neat is that the description of the victuals unfortunately feature spoilers, making the menu not an easy hand-out, which it would have otherwise been.

From notorious pirates frequenting his house to his whole staff, we get a variety of stats and nice b/w-artworks (though you might know some of them) and thus also some neat hooks as well as stats to drop on your players.

The second half of the pdf is a short side-trek adventure, which also features a nice b/w-map (again, with those damn numbers).

The following contains SPOILERS for the adventure (for levels 4 -6). Potential players may wish to jump to the conclusion.

Still here? All right! Didjer hires the PCs to guard his crabbers versus sahuagin attacking him. After a short trip by boat (including a first attack by sahuagin), the PCs may explore the cave where they boat anchors. Yes, cave – not the high seas – something is off here. Beyond defending the crabbers, the CPs may also unearth a secret cache of items/treasure, defeat a new deadly plat creature – and find the crabbing “farm”. There’s a reason Didjer’s crab-food tastes so good – it’s the Askalans here. Crab people, sentient and intelligent – caught between the humans wishing to consume them and the sahuagin’s teeth, these poor unfortunates are not looking forward to a nice fate… How the PCs handle this is left completely up to them – but they well might make a couple of powerful and unpleasant enemies if they don’t shut down Didjer’s operation… Here, some guidance on communicating with the crab men and intimidating the crabbers would have made this better imho.

The pdf provides two new monsters, aforementioned plant creature and the crab people, both of which come with beautiful full color artworks.

Editing and formatting are top-notch, I didn’t notice any significant glitches, apart from not being a big fan of the formatting of the “poison” of the second new creature in the middle of the flowing text. Layout adheres to SGG’s 3-column full color standard and the pdf comes with fitting full color and b/w-artworks. The maps are serviceable, but player-friendly versions would have been nice to have. The pdf comes fully bookmarked for your convenience.

Christina Stiles is a great author and her strength for iconic locales with some subtle humor is well executed here – though this time around, your PCs may choke on their laughs as they find out what this is all about. This being said, there’s nothing truly wrong with this supplement and I thoroughly enjoyed the offering – but there are some minor issues here and there – the spoilers in the menu that disqualify it as a hand-out, the lack of player-friendly maps and the omission of the communication-issue/intimidation etc. slightly detract from the offering – not massively so, but they accumulate – to the point, where my final verdict can no longer clock in at max stars and instead will settle on a respectable, heartfelt 4 stars for a great little backdrop that could have been even more.

Get this great tavern supplement/sidetrek here on OBS or here on d20pfsrd.com’s shop!