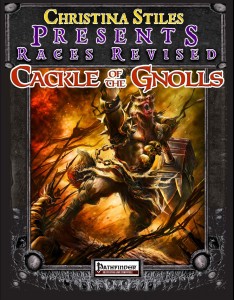 We kick off this pdf with a short discussion on gnoll society as well as their racial attributes -which follow the ARG-entry at +2 Str, +2 Con, +1 natural armor and darkvision 60 ft and gnoll weapon familiarity. – and yes, in contrast to the ARG, we really get a glimpse at gnoll culture here as well as extensive information on race relations and the important age. height and weight-tables.

We also get an array of 11 different alternate racial traits that include a 1d3 bite attack, scent only useable to find carrion (can you see the gnoll detective? Or for some of the Otakus out there, the Kurosaga Corpse Delivery Service as an adventuring group?) or get stealth and perception as class skills for a -2 penalty to Int to reflect a focus on more base aspects of their nature.

There also is a trait to make gnolls better acclimated to desert terrains, but at the cost of -2 to cha and one interesting one that increases your speed by +10 ft and by further 10 ft. when charging, withdrawing or running – nice one! Rather enjoy a more intelligent take? Excvhange the standard attribute modifiers for +2 Str and Wis, -2 Con and +1 to all saves.  As further comfort-tools, 4 variants are spelled out – looking for a throwback? Just take a look at the entry and you know which alternate racial traits to go for. A small thing, really, but one I really like since it codifies abstaract traits ina  context within one’s gaming world.

All Paizo-classes sans variants (i.e. not samurai, ninja, antipaladin etc.) also get balanced favored class options herein before we go on to the two new racial archetypes, first of which would be the feral oracle, who gets expanded skill-lists, modified mystery-spells and the ability to beast shape and enter a rage at -4 barbarian levels. Rangers may opt for the pack-bonded hunter, who may loan teamwork-feats to allies and at higher levels, have allies benefit from the quarry class-feature – an easier, less complex version of the pack-idea than the terrible Wicked Fantasy: Gnolls proposed and one I can get behind – kudos for doing this – though honestly, I would have loved to see even more pack-themed options herein.

Now we also get 4 gnoll-specific items – the hyena whistle, battle dye, the triple flail (Two-handed weapons reminiscent of flint bars in function, if not name -cool!) and a nasty bleed-damage inflicting gel to add to weapons – neat indeed! Speaking of neat – we also are introduced to antigravitic ore, which allows you to create lighter weapons (with e.g. increased range for thrown weapons or lighter armor. And then, there’s fact that this ore allows you to create two-handed weapons that are treated as one-handed weapons – at an exceedingly low price. And that, my friends, conjures forth horrible images – can you see the rangers TWFing greatswords? I can, and it’s not pretty… Or rather, I could – fact is, the material does not influence your ability to wield e.g. two-handed swords – you still need two hands. Nice that designer Mike Welham has caught this potential pitfall…

Next up are 11 racial feats – from those that make you a specialist in riding hyenas, increased speed in plains and deserts, increased resiliency versus ingested poisons, a better bite attack, improved demoralization (to the point where your attempts may hamper spellcasting!) a tripping bite, trips that may stagger foes and also two pack options: One that lets you loan 3+Int-mod rounds teamwork-feats to allies and one that allows you to benefit from sniping-feats of your fellows.

On the magic item front, we get the new disentangling quality, which prevents countertrips, a cloak which may turn you into sand (and blow you through small cracks, a hyena figurine and a slavers harpoon that erupts in subduing tentacles upon impact – cool!

We also get the new ferity subdomain of the animal domain that comes with better demoralization and we also get 4 new spells: Blessed Hunt allows you to declare a target or group of targets – you and your allies get rather long-lasting bonuses versus said foes – also tracking them. The second spell, Bloodlust, allows you to enhance your favorite enemy bonus or loan your favorite enemy bonus to allies and the final two spells are unnerving laughter and its mass-cousin: They don’t hamper your spellcasting, but may make foes shaken when they have to hear it.

Editing and formatting are very good, I didn’t notice any significant glitches. Layout adheres to SGG’s 3-column full-color standard and the pdf comes fully bookmarked for your convenience. The cover-artwork is awesome and the interior artwork okay.

Designer Mike Welham has succeeded in the design-goal of providing an identity and some exclusive, nice tools for gnolls that will have PCs curse them – and unlike the last Gnoll-centric supplement I reviewed, “Cackle of the Gnolls” is neither broken, nor imprecise in its wordings and content and features some rather cool ideas. Were I to complain about anything, then it would be that the pdf plays it a bit safe – it’s for example cool that unnerving laughter could be used offensively to ostracize others. That being said, there is quite a bunch of content you’d expect and e.g. the new subdomain is not particularly intriguing. Still, the majority of the new tools herein is fun and makes you crave more pack-related options to fight those nasty PCs – those already provided are definitely making you crave more. Hence, my final verdict will clock in at 5 stars, just short of the seal of approval.

You can get this awesome supplement for hyena-men here on OBS and here on d20pfsrd.com’s shop!