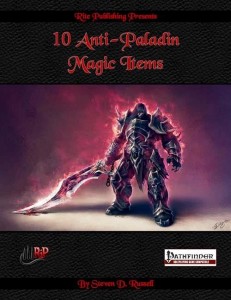 This supplement is 11 pages long, 1 page front cover, 1 page editorial, 1 page SRD, 2 pages of advertisement, leaving us with 6 pages of content, so let’s take a look, shall we?

We kick this pdf off with 2 new weapon qualities – spiteful and tormenting. And yes, they are as pleasant as they sound: Spiteful weaponry allows you to 3/day as an immediate action use touch of corruption plus his cruelty class feature on foes that hit him/her -provided, of course, the character still has uses left. Tormenting weapons can hamper foes with pain if they are hit (thankfully with a scaling save-DC) and antipaladins actually can draw strength from the pain they thus inflict for a temporary buff.

The first full-blown item, like two others, actually comes in multiple versions (lesser, greater, superior), adding to the value of the pdf. The first item in question would be the Boots of the Craven, which take the unutilized cowardliness of anti-paladins and allow these guys to catch others and drag them with them to their doom or move with foes – which per se is cool, though “get a direct bead on someone” is an expression I don’t know and dictionaries yielded nothing but those definitions I already knew, so I assume there’s a typo here – not a crucial one, mind you, but it’s there.

The second item coming in multiple versions would be the bracers of vile tactics, which allow you to e.g. not provoke AoOs when using dirty trick and make the penalties gained via the maneuver last longer, use dirty trick as part of regular attacks or, in the case of the superior version, forego smite bonus damage for +1/2 foregone damage to CMB when using dirty trick. I’m not sure, though, how long this bonus lasts. While the item specifies that the effects of smite evil return to normal in the following round, nothing is said about how long the bonus to dirty tricks lasts.

The third item coming in multiple qualities would be the Tabard of Malicious Metamagic, which allows the anti-paladin in question to prepare chaotic and evil spells at a lower metamagic level adjustment and the improved versions net access to metamagic feats only usable for chaotic/evil spells. There is also a pair of gauntlets, which only works on a target that meets special conditions, but makes it possible for antipaladins to take these targets hostage and teleport them away/execute them – nasty indeed. Also rather evil – a helmet that allows the character to 3/day use touch of corruption and/or cruelties. Rings of Betrayal are also nasty – these rings come in pairs and seem to be rings of shield other – until the antipalaldin wearing one activates them and forces an undismissable shield other effect on the target – oh, and the ring turns cursed. Gleefully evil.

The final regular item would be the Vestments of Ill Repute, which net an anti-paladin neat bonuses every time they perform dishonorable attacks – and yes, these are rather well-defined. The pdf also provides us Harnskarr “The Vicious Storm” – a legacy weapon that not only was created by the legendary weapon smith Iron Star Illith for usage in the Coliseum Morpheuon and provides a variety of really nasty enchantments that will make the foes of the wielder rue the day they crossed him/her.

Editing and formatting are less tight than I’ve come to expect from Rite Publishing – I e.g. noticed an instance of a “who” or a similar sentence fragment missing and some wordings could have been slightly more precise. Layout adheres to RiP’s 2-column, full-color standard and features some disturbing, awesome artworks. The pdf comes fully bookmarked – two thumbs up for that.

Anti-paladins haven’t gotten as much as I would have liked and the 8 new magical items (more with all the varieties) and 2 new qualities (3 if you count the legacy weapon’s Deed Breaker-metal) make for nice content for a more than fair price – some rather deadly tools to make the do-gooders despair. My final verdict will clock in at a final verdict of 4 stars for a cool collection of items with some minor rough edges.