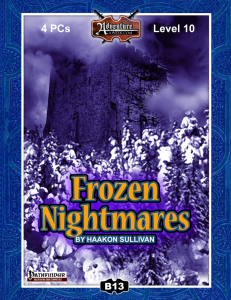 The PCs are recruited by one Wilhelm Dobbenspeck to venture to the remote village of Domandro, thought lost in the icy Tundra to ages and unknown problems. After an exhausting trek through the icy regions, the PCs find the village – and there’s something seriously problematic going on there. The whole town seems to have been flash frozen, courtesy of the adventurers that once lived in the town – but why? Well, the PCs, provided they can withstand the supernatural cold, will have some nice, sandboxy explorations to do.

See, the town is anything but empty – two factions of giants have settled down here: A bunch of ignoble, vile ettins and some slightly more approachable and honorable frost giants – both factions would like to take a bite out of the PCs, though… Worse and complicating everything, a necromancer named Jimmie Quickfingers also has settled in the village. In order to properly navigate the village and piece together the clues, the PCs can use these factions against one another and finally deduce what has happened:

Creatures from the stars descended as deadly creatures upon the town and in order to contain the infection used an artifact aptly-named “Cold Snap” – unfortunately, proximity to its elemental cold also results in some mutations (which you can represent via a new table) and the artifact rests now in the clutches of the local white dragon. The combat against this dragon is unfortunately rather handwaved and represents the weakest part of the module.

Upon destroying the artifact, the PCs will have to deal with the dread invaders from the dark Tapestry to secure a future for this village out of time – as its population wakes from the cold slumber into a world that is no longer their own.

Editing and formatting are good, though not perfect – minor glitches here and there, like a wrong creature-type (though the crunch is correct) of a giant to minor typos can be found, though nothing that would truly impede your ability to run this module. Layout adheres to AaW’s 2-column full color standard and the 2 new maps are beautiful, though they come sans the usual player-friendly versions. The pdf doesn’t have any bookmarks, which slightly detracts from its usability, but it does come in two versions, with the second one being more printer-friendly.

Author Haakon Sullivan has created a great sandbox with some awesome pieces of fluff and an atmosphere of forlorn doom. The module offers quite a few excellent scenes and overall, the sojourn is a joy to behold – with some minor issues, though: The lack of bookmarks and player-friendly maps as well as the handwaved dragon encounter somewhat detract from the module’s appeal, at least for me. Especially the latter is simply not necessary and should have been cut in favor of more details on the superb location. All in all, what remains is a nice adventure-module that only closely misses the higher echelons of its craft. Due to the well-crafted mood and locations, I’ll settle on a final verdict of 4 stars.

You can explore this frigid landscape here on OBS!