Chronicle of the Gatekeepers Sidetrek: To Not Serve Man

Chronicle of the Gatekeepers Sidetrek: To Not Serve Man 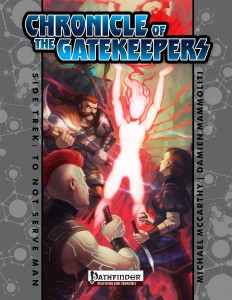 This installment of the chronicle of the gatekeepers campaign serial clocks in at 11 pages, 1 page front cover, 1 page editorial, 1 page SRD, 1 page back cover, 1/2 page advertisement, leaving us with 6.5 pages of content, so let’s take a look!

Among the races of NeoExodus, few have as bad a reputation as the ominously-named Calibans – the white-skinned creatures can consume their foes to take their strength into them and as such, do not have a particularly nice reputation. Civilization does what civilization does, though – ultimately, it is superior to less developed societies and as such, by now a significant array of these humanoids have become more enlightened, more civilized. These beings are known as the kalisan and the module begins with one of these people arriving in Teryth with dire news: Branded an outcast and expelled from the caliban tribe to which she once belonged, a caliban named Koorka, now turned kalisan, brings news of a vast amount of calibans preparing to raze Teryth to the ground. Unfortunately for her, she lands in prison for her troubles and it’ll be up to the PCs to make the populace see – the caliban hunters and their hounds on the heels of Koorka lend further credence to the veracity of her claims.

In any way, time is of the essence: Getting the mayor on their side, the support of the church and springing free Koorka are all valid actions, all with their own consequences – and ultimately, the number of casualties the assault will have depends on the PCs – they will have to stand their ground against the assault of the calibans. After driving back the attack, Koorka is free to go and leaves with warnings of the Vespans… The pdf comes with full stats of calibans and their dogs, a magical, bite-attack-granting item and stats of the caliban bola.

Editing and formatting are very good. Layout adheres to LPJ Design’s elegant 2-column full-color standard for the series and the module comes fully bookmarked and in a second, slightly more printer and mobile phone-friendly version.

Michael McCarthy and Louis Porter Jr.’s “Not to Serve Man” has a somewhat interesting twist regarding its name. Over all, I enjoyed the simple basic set-up of this sidetrek and its climax is sure interesting. At the same time, this module is slightly more conventional than most siege scenarios I know: The PCs stand their ground against the waves of the foes and that’s basically it – casualties depend on their actions, sure, but unlike other installments in the series, there is less distinction regarding the rewards gained than in other sidetreks and during the siege, there is not much variety in the tasks – just kill the foes, done. No infiltration, no sudden eruptions from underground, no disgusting, plagued meat flinging catapults… Ultimately, this is a good, fun sidetrek, but one that falls slightly short of the best installments of the series. My final verdict will thus clock in at 4 stars.

Want the whole subscription instead? You can get that here on OBS and here on d20pfsrd.com’s shop!