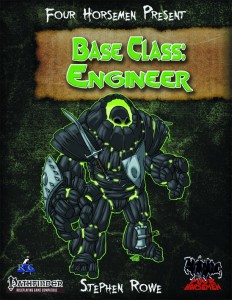 This base class clocks in at 11 pages, 1 page front cover, 1 page editorial, 1 page SRD, leaving us with 8 pages of content, so let’s take a look!

The base class engineer as presented herein has d8 HD, 4+Int skills per level, proficiency with simple weapons as well as with light, medium and heavy armors, but not shields and receives a 3/4-BAB-progression and good Ref- and Will-saves. The engineer begins play with Craft Construct as a bonus feat and treats her engineer level as a caster level for the purpose of qualifying for magic item creation and feat-prerequisites. The engineer can create spell-trigger and spell-activation items. From the very first level on, the engineer also has a crafting pool of equivalent GP-value for crafting purposes, beginning with 100 gp and scaling up to 100K at 20th level, with the respective levels being cumulative. The gold may also be used for repair-purposes.

Now, the ardent reader may realize that the automaton is a bit weaker than the eidolon, for example – there is a reason for this. The automaton is designed to be worn by the engineer, and so is every construct the engineer makes, though only the respective engineer can wear a given construct. Entering or exiting a construct is a full-round action. Upon entering one of her constructs, the respective engineer may utilize the construct’s physical ability scores, attacks, magic immunity, DR and the resistances provided by the construct traits, with class abilities and the like being used with the construct’s ability scores, but the engineer does retain her own HP. Magical item benefits do not extend their benefits from the engineer to the worn construct and spellcasting is impossible while wearing a construct. On a downside, the magic resistant effects of e.g. magic immunity and the like also apply to beneficial effects and spells targeted at the engineer. Any damage that surpasses the DR-value is taken by BOTH engineer and automaton. Upon being rendered unconscious, an engineer’s construct follows its last orders and for the purpose of arcane spell failure and the like, worn constructs count as heavy armor that apply a 50% arcane spell failure chance as well as no armor check penalty. Armor and construct-wearing cannot be stacked.

Starting at 2nd level, the engineer may choose one of the talents of the class, the construct modifications. An engineer receives an additional construct modification every 2 class levels attained after 2nd level and said modifications are automatically applied to all constructs she has at no additional cost. The modifications include improved AC, attribute bonuses as well as additional movement modes like flight or burrow speed. While the latter options could have imho used a slightly more finetuned availability, the base level requirement prevents them from breaking any game – kudos for getting that right! Teaching a construct language, allowing them to disguise themselves, replicant-style, as living entities, bonus elemental damage and energy rays, Grab, Size-increase and golem-like traits, maneuver tricks – there is a lot to customize here and high level engineers may even add limited fast healing to the constructs they create.

Now, the ardent reader may have noticed that the repair-speed provides a pretty nasty detriment for the engineer – one that would render the class all but useless at higher levels. (Think about all those HP and how long healing THAT would take…) – hence, at 3rd level, an engineer makes 1 week worth of Craft-progression in a single day, making not only construct crafting feasible, but also meaning that she can actually properly pursue the adventuring career. 5th level provides a teamwork feat and extends all teamwork feats the engineer has to the constructs…but my playtest did show that even quicker repairs were somewhat problematic in the mid-level range…a fact another class ability cleverly mitigates: Starting at 7th level, engineers may Int-mod + 1/2 class level times per day, repair constructs by patching them up, granting them 1d8 temporary hit points per two class levels. These last for 1 hour per level and cannot raise maximum hit points above that of the construct. Activation action is a standard action, a swift action while wearing the respective construct to be patched.

At 9th level, 1/day, an engineer may, as a full-round action, jury-rig constructs to replace a construct modification with another one, gaining a limited wildcard-flexibility, one that extends to all her constructs at 17th level. High level abilities include taking only half damage while wearing the construct, construct-disabling/controlling with a touch and finally, even quicker crafting progression as a capstone.

Editing and formatting are excellent, I noticed no glitches. Layout adheres to Rogue Genius Games’ two-column full-color standard and the pdf comes fully bookmarked for your convenience. Jacob Blackmon contributes his great, original art – aesthetics-wise, there is nothing to complain here.

Indeed, neither is there much to complain about in the craftsmanship or rules-language of Stephen Rowe: The engineer tackles a pretty complex concept in an easily understood, concise manner and presents a cool take on the power-armor-wearing class (as opposed to Interjection Games’ full-blown Mecha-PrC, for example). Indeed, I was pretty positively surprised by how deceptively tight the balancing of the automaton is: You see, the issue with constructs lie in their massive array of immunities in combination with the difficulty of healing them: If you provide full healing, they inevitably end up as OP, while too stringent restrictions result in the respective class being unplayable due to not being able to heal up…ever. The feat of this class lies in its elegant solution of this issue, one that takes the non-linear power/damage-progression of PFRPG into account, with increasing flexibility to maintain functionality at higher levels. In one sentence: This class is, from a design stand-point, much more impressive than a cursory first glance would lead you to believe. Indeed, the class does play surprisingly well and can be considered to be a welcome addition to the roster of classes, though obviously one that belongs into experienced player hands, mostly due to the automaton-rules and the requirement for separate and hybrid stats. There is one thing I was missing from this pdf beyond a tad bit more unique automaton-tricks and that would be favored class options, but ultimately, both of these gripes boil down to me being nitpicky. Barring true complaints, I can settle on a final verdict of 5 stars for this well-crafted class.

You can get this power-armor base-class here on OBS and here on d20pfsrd.com’s shop!