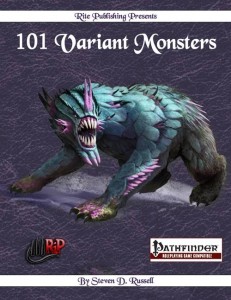 This installment of Rite Publishing’s 101-series clocks in at a massive 47 pages, 1 page front cover, 1 page editorial, 1 page SRD, 2 pages of advertisement, leaving us with a massive 42 pages of content – a great bang for buck ratio, but can the quality stand up to the quantity?

Organization-wise, these variant monsters are grouped together by CR, spanning the gamut from CR 1 –CR 25 – personally, I consider this organization great, since you’ll probably not be searching for variant monsters by their name. The respective entries all feature the name of the base-creature to be modified in brackets and the entries themselves can be considered creature-archetypes or templates created for one specific creature, though unlike most templates they do not modify the base-creature’s CR. Take for example the first creature, the Brownie of the Solstice Court: Taking the benevolent fey, we get essentially the unseelie version of the critter – they are not only unpleasant in their maliciousness, they get a new signature ability – a dust they use to cover their bows (for their feat/weapon-choice reflects the changed focus), which not only penalizes those hit, it also makes the victims incur a confusion-like effect that should make these nasty fey loathed foes of your PCs. We also get desert ghouls that turn into hyenas and fast healing as long as they are not deprived of flesh to fuel their cannibalistic healing. Giant Armadeiras Spiders are also interesting – their strange poison is not canceled out by antitoxin and requires successful first aid in the form of a healing-check to prevent suffocation – rather cool!

In the CR 2-range, we e.g. get a dream imp, which not only gets a gaze that makes its victims susceptible to sleep and less alert, but which make also cover whole areas in subtle auras of dream-like haziness. Or did you want a foe for blink dogs? What about the new Flicker Wolf, which may bite through portals? Very nasty for hit-and-runs… In the CR 3-range, a black version of the hell hound, the Dipian, may drain the blood of his adversaries. There also is a rust monster-variant that decays flesh instead of metal and a cockatrice that can vitrify foes – with full rules for vitrification given, of course.

A classic, the Giant Scythe Beetle, makes a return to PFRPG in the CR 4-range. One of the strangest ways to be trampled would be featured in the new variant of Amphisbaena – the ouroborus may lock heads and roll over foes – weird, but also a cool idea. Cooler, though, would imho be the variant of the Slithering Tracker that paralyzes its foes and then invades their bodies, taking control – this one actually coming with a full-blown template for the unfortunate host-creature – a nice example for Rite Publishing going above and beyond what would have been required from this book in favor of cool concepts. Speaking of cool concepts: Turning winter wolves into Dogs of war with slashing/piercing breath weapons as well as DR is a great idea. Speaking of great ideas: If you’re like me and are missing the eye tyrant-rays of a certain IP-protected creature, you’ll enjoy a variant of the gibbering mouther that has a weaker, but nonetheless versatile selection of eye rays.

Another fine creature would be the Thunder Jinn – a variant of the regular Djinni that replaces whirlwind form with a cool ability that has thunder and lightning smashing down on the djinn, adding sonic damage to attacks as well as a cool vulnerability to… silence! Or take an aquatic version of the medusa that gets petrifying attacks and may attack with her hair.The CR 7 Bladeleaf-treant may animate its leaves as a swarm (which gets its own statblock) and one particularly infamous torture implement, the Brazen Bull, becomes a variant for the gorgon that cooks those locked in its form alie – disturbing indeed! What about a bubonic plague-spreading variant of the behir that not only gets a diseased breath attack, but which may also fling foes around or see in smoke?

Perhaps you enjoyed the by now legendary hidden character Nordom from Planescape: Torment and always wanted a version of a malfunctioning Zelekhut inevitable? Well, there’s a variant in here as well and yeah, Maruts also get their due!

Golemcrafters may now create a Maharal Golem, which may turn naturally invisible and spawn wraiths, whereas earth elementals may now be exchanged with adamantine elementals. On the cool side, Devourers may now be changed to emit dangerous, deadly chaotic waves of energy.

If you’re looking for some cool mythological creature, why not check out the Jotund Troll-variant – the Grendal – and yes, from a susceptibility to grappling to a dread aura, it comes with some cool signature abilities. Have I btw. mentioned the Prism-energy based Nightwalker/flier/etc.-variants or the awesome variant linnorms one can also find herein? Especially the Chaos Serpent with its massive breath weapon table is a highlight among them. Speaking of highlight: As someone thoroughly entrenched in Norse lore, the Norn of the Solstice Court as a less benevolent dealer of fate is one of my favorite creatures herein – at CR 18 also one hell of a foe and not one to be trifled with.

There also are variants of Cyclopes – good, blinded ones and those with deadly precognitive knowledge that makes hitting them extremely difficult indeed. Jorogumos get a variant with the Red Harlot – spider-like predators that apart from their limbs, look like beautiful women – and contrary to their appearance, they are not that bad: While not nice by any definition, they are brilliant kidnappers that do not seek the death of their victims and are honorable to a fault to boot – always speaking the truth, which makes for an interesting combination.

One of the cool variants in here would be the CR 14 Hand of the Reliquary – the hand of a vanquished avatar or similar powerful being, these deadly things (based on the Demi-lich) can age you prematurely to venerable age’s threshold and blast foes with deadly rays of pure entropy – beware, blasphemers, beware!

Apropos beware – I mentioned CR 25 before – well. It’s a variant of the Tarrasque – one that essentially turns it into the King of Monsters, Godzilla in all but name! Yes. If you’re like me, that one will make you smile just as much as the extremely deadly new behemoth variants.

Editing and formatting are very good, I didn’t notice any significant glitches. Layout adheres to RiP’s two-column color standard and is relatively printer-friendly. The artworks, when applicable, are nice and thematically fitting and usually are stock-art, though at this fair price-point, that’s more than ok. The pdf comes fully bookmarked by CR.

Impressive – that’s what this pdf is. When I read about this first, I expected some lame “Exchange x with y” basic entries accompanied by some reskinning – but this pdf offers SO MUCH MORE.

Each and every creature herein comes at least with one, more often than not multiple new signature abilities and weaknesses, borrowing extensively from both Norse and Asian myths to supplement original creations to deliver variants that are thoroughly original and honestly often better than full-blown new creatures I’ve seen. In fact, the sheer amount of cool ideas herein is rather astonishing – with e.g. the aforementioned hand and similar far-out concepts, the pdf is surprisingly lacking in only one category – and that is filler. While not each creature is glorious, the amount of beings I’d consider lame can be counted on one hand – which is next to nothing, given the amount of them we get in here. It would have been so easy to deliver a lazy job here, but that wouldn’t be rite – and so author Steven D. Russell gives us a glorious collection of variant monsters that cuts an awesome figure when compared to just about any bestiary – especially when taking the extremely fair price into account.

Reskinning monsters can make them interesting again – using these variant monsters will make your players dread stats they (mostly) ought to know by now – and even if only used to scavenge signature abilities, this pdf delivers in spades – the 101-series continues its glorious stride of top-notch material with this installment, scoring a full 5 stars plus seal of approval – so go ahead and bring these variants into your game!

You can get these fearsome critters here on OBS and here on d20pfsrd.com’s shop!