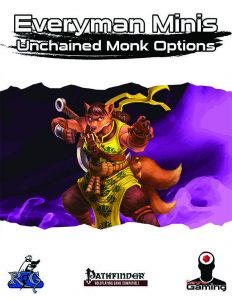 This installment of the Everyman Minis-series clocks in at 7 pages, 1 page front cover, 1 page editorial, 2 pages of SRD, leaving us with 3 pages of content, so let’s take a look!

As per the title, this book provides new options for the unchained monk, focusing primarily on style strikes. As such, the pdf recaps the ability before diving into the nit and grit of the respective options. The pdf provides a total of 5 different style strikes: Arm Wrench and Fake Out allow for free disarm/feint-checks; the former sans AoO. The latter is interesting: The monk gets + Wisdom-bonus to the check, and on a success, may designate an ally threatening the target, who then receives an AoO against the feinted target. The monk may not use this to grant herself an attack. Gut Blow requires 13th level and nauseates the target on a failed Fort-save for 1 round. Head Smash is pretty much the same, but instead uses confusion as the condition inflicted. Finally, outmaneuver allows the monk to make an Acrobatics check to move through the target’s space, ending up in any space adjacent to the target. This movement does not count towards movement totals and on a failed check, the monk may be pummeled by the target, but still – cool ability regarding the dealing with big baddies.

Crane imposes penalties to AC, with the advanced benefit allowing the monk to knock the target prone; Dragon increases the save bonus and may even grant temporary immunity to sleep, paralysis and stunning at high escalations, with the advanced benefit allowing for the swift action use of Dragon’s Roar for 1 ki point – each target that fails its save is treated as though it had been hit for the purpose of determining the effects of the subsequent hits of this technique. The Mantis technique nets a bonus to attack versus the first target of the hits, with subsequent hits also providing bonus precision damage. The advanced technique can render the target of the first hit flat-footed against the monk until the start of the next round. The Monkey technique lets the monk may move herself or the target by 5 ft. (Will thankfully negates, but still, a bit weird – this is usually tied to CMD); subsequent hits allow for additional movement and the advanced benefit yields flanking benefits, regardless of ally positions.

Panther technique lets the monk forego up to 3 attacks on a successful hit: For each such foregone attack, the monk may use Panther Style for a retaliatory attack as a free action instead; if the monk has Panther Claw, even when it’s not her turn. Unfortunately, this does not work as written. Style techniques require the use of flurry of blows, a full-attack action. Panther Style nets you a retaliatory AoO as a swift action against a target, but only if you provoke an attack of opportunity from the target by moving through a threatened square. Full attacks usually mean that you won’t move through threatened squares, unless via 5-foot-steps, which normally do not provoke AoOs. Now yes, I *can* create a build-constellation where the benefits become possible to trigger, but that would be a hyper-specialized case. I *think* something went awry with the action economy here – perhaps the technique was supposed to allow for some other sort of foregoing attacks, but I honestly can’t determine how this was supposed to work. And that is before the complicating factor of Panther Claw. Weird.

Snake technique allows you to forego attacks as well; for each attack thus not executed, you may apply the massive benefits of the activation of Snake Style’s benefits (basically, Skill as AC, which is problematic and pretty min-maxy, but not the issue of the pdf, but the feat) to 1 + the number of attacks foregone. The problem of the technique once more lies in the interaction of technique and Style-feat benefits: The technique reads “For each attack he foregoes…” and then proceeds to note the benefits mentioned above. RAW, if you forewent 3 attacks, you could gain the benefits of Snake Style for 3 (number of attacks foregone) x 4 (1+ number of foregone attacks) attacks; this makes no sense, for Snake Style requires an immediate action for this benefit, and the duration these can be held is only until your next round – the doubled benefit is obviously a relic of former rules-language, resulting in this weird doubling that doesn’t work as presented. This makes sense once the advanced benefit is unlocked, which nets you 1/round free action use of Snake Style even if its not your turn, but yeah…all in all, weird and surprisingly unrefined for the author.

Snapping Turtle technique boosts shield bonus as well as yields bonuses to grapple attempts via Snapping turtle Clutch. The advanced technique just provides further +1. The Tiger technique provides a 19-20 threat range, 17 – 20 with Improved Critical, but only on the first hit. Subsequent hits deal +1 bleed damage to the bleed damage dealt by Tiger Style, i.e. the 1d4 inflicted by the first attack’s critical hit’s bleed damage. Okay, here we have an instance where the ability MUST explicitly note its obviously intended deviation from default rules: RAW, bleed does not stack, much less with itself, unless specifically noted. Here, the subsequent attacks obviously are intended to stack bleed damage not only with themselves, but also with de facto another source of bleed damage. This increase, while not entirely unheard of, needs to be spelled out to make this work. The advanced technique increases bleed duration from 2 to 3 rounds.

Editing and formatting are good of a formal level; I noticed e.g. a slightly confusing superfluous “that”; more importantly, though, the rules-integrity of quite a few of the more involved and complex techniques herein is compromised, not in presentation, but interaction. Layout adheres to Everyman Gaming’s two-column b/w-standard with nice full-color art. The pdf has no bookmarks, but needs none.

Luis Loza usually does much better. Don’t get me wrong, I really enjoy the concept of style techniques – they are interesting and I can see myself using most of them. As a nice bonus, hardcore WuXia-campaigns may consider to bake them into the style feats, should they choose to grant more flexibility to the unchained monk. I want to love this. However, there are a couple of pretty problematic issues herein, particularly considering the brevity of the pdf. While two of the issues, bad enough, compromise the formal rules-integrity, they can be solved by a competent GM. The same can’t be said about Panther technique, which even left me puzzled as to how it was supposed to work. The concept deserves further exploration and I like it, but as presented, I cannot rate this higher than 3 stars.

Unchained Monk Archetypes #1 can be found here on OBS!

Unchained Monk Archetypes #2 can be found here on OBS!

Purple Duck Games also has a collection of unchained monk archetypes – there is some overlap here, but Purple Duck Games’ version attempts to do pretty creative things with the archetypes; I reviewed them back to back with Everyman Gaming’s versions, if you’re interested in a comparison.

You can get Purple Duck games neat unchained monk archetypes here on OBS!