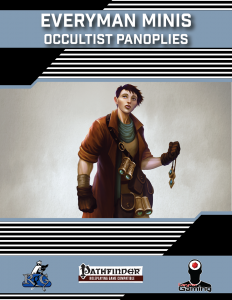 This Mini is only available as part of the Klickstarter-bundle and clocks in at 7 pages, 1 page front cover, 1 page editorial, 2 pages of SRD, leaving us with 3 pages of content, so let’s take a look!

So, what are panoplies? They are a set of occult objects that increase in potency when combined. An occultist can select a panoply when choosing a new implement school, but in order to do so, they must have selected the implement school for all implements involved at least once. As with any other implement school, learning a panoply’s implement school nets access to the resonant power and base focus power, and the other focus powers may be learned. One spell per spell level is added to the spell list, and these may be chosen from any spell list of implements contained in the panoply.

The pdf presents three such panoplies, the first being Deft Gambler’s Hands, consisting of gloves (evocation) and ring (illusion); the resonant power makes a damage die for every 2 mental focus invested rolled for a spell or focus power that comes up as a 1 or 2 count as a 3. Nice. The base focus power lets you spend 3 points of mental focus to create shadow evocation-style imitation or an evocation spell, with class levels increasing the degree of reality of the imitation spell. The focus powers allows you to share low-powered special item qualities among weaponry, fix parts of damage rolls (by number of dice) or increase your reach temporarily. Very cool!!

Jarl’s Wartorn Garb consists of crown (enchantment) and weapon (transmutation) has a scaling morale bonus applies to a type of roll, and the resonant power lets you spend mental focus as swift actions for short-term morale bonus for brief ability score bursts. The focus powers include temporarily increasing the maximum bonus of a resonant power can provide; you can negate voluntary attack penalties or temporarily unlock rage powers. Cool!

Finally, kyubi’s kindred consists of mask (illusion) and vest (transmutation) and makes the resonant power change your race to kitsune, with higher levels allowing you to assume specific humanoid forms and fox-forms, with the base focus power allowing you to duplicate Magical tail-like tricks. (no, can’t be cheesed!) Focus powers include immediate action mislead as a counter to being hit, conjuring foxfire and greater possession.

Conclusion:
Editing and formatting are very good on a formal and rules-language level. Layout adheres to the series’ two-column full-color standard, and the pdf comes with a cool artwork. The pdf has no bookmarks, but needs none at this length.

Sasha Laranoa Harving’s occultist panoplies are a true joy – for one, it’s awesome to see how far she has come regarding her design prowess. More than that, they are a genuinely cool concept, one that only has me sad that there probably won’t ever be new ones penned. The concept is tight, and thankfully, all the tools to make more are present for those up to the design task. A great occultist-expansion, this gets 5 stars and my seal of approval – highly recommended for fans of the imho criminally-underrated occultist class.

You can get these cool occultist options exclusively here in the bundle!