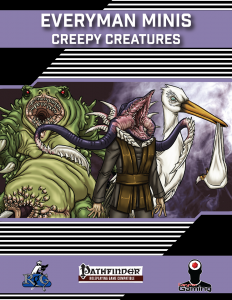 This Mini is currently only available as part of the Klickstarter bundle, and it actually is not a mini – the pdf clocks in at 23 pages, 1 page front cover, 1 page editorial, 4 pages of SRD, leaving us with 17 pages, so let’s take a look!

In case you missed out on one of my favorite creature types in all of Pathfinder, the introductory page recaps what a levialogos is (plural: levialogi) – first introduced in Paranormal Adventures, I’ve been a huge fan of these super-deadly foes and their ability to actually withstand the punishing powers of high-level PCs.

The creatures contained herein, just fyi, all come with their own original full-color artworks, which is pretty awesome. The first creature herein would be the Belledame (clever nod towards “beldam”), a CR 14/MR 7 that looks like a horrid amalgamation of a woman and a spider, with split arms; a SP-array includes the new level 5 terror spell included in the write up, a cone of fear effects that stacks with others and properly notes fear condition progression. The entity can create its own permanent demiplane that has an access to the mark’s home. Mark? Belledammes mark creatures younger than adult, gaining massive +6 bonuses against the target re attacks and plenty of skills. They may animate their own severed limbs (!!), and they may bind targets within their domain, preventing escape. Sounds eerily familiar? Yep, this is essentially a take on the supremely creepy monstrous being from the Coraline movie. LOVE IT!

At CR 6, we have the Saevedicteur demon, a bipedal frog/bear thing with a muscular tail. In its stomach, it has a funnel-mouth of prehensile teeth that can swallow whole foes. The attacks of the demon can intimidate and the tail can carry items or grapple. The tail can also be used to nauseate the target via tickling. As a bully-demon,, it can enfeeble targets, and their intimidation causes damage as well! These demons are very cool – plus, Jacob Blackmon’s artwork is one of my favorites from him – the stomach maw with its prehensile teeth is true nightmare fuel. Two variants are provided for bullying by size or age.

The gerana is a CR 13 magical beast reminiscent of a Large stork- They can at-will allfood, which is sweet and succulent to boot. But is has an effect that is scary – it reduces the target’s age by a number of years equal to the maximum age modifier, up to two age categories and minimum 1. Create water similarly creates milk or juice and meets nutritional needs; fabricate can generate child-rearing tools. The entity can use its body as equipment required for Profession (midwife) and takes no penalty when attempting to inflict nonlethal damage; they can swallow helpless creatures as if in a grapple, and as a standard action, can execute a sleeping song (making use of the excellent Sleeping Rules the series introduced!). If a target is reduced to a low age, the gerana swallows them, transports them to the ovaries and then proceeds to lay an egg, with the target regrowing to previous age, but with a complete mindwipe. Oh, and while they are neutral, those raised, much like cattle, will be slaughtered sooner or later. The creature does come with the babywearer’s sling magical item. This one…oh boy. I though the storkmen of the Undercroft-zine were creepy, but these? Oh boy! I Love it – totally disturbing and alien!

Marawai are obviously gremlins inspired, well, by Gremlins. You know, the movies. Their natural weapons count as 4 size categories larger, and they can add swift demoralize attempts to attacks. They have two forms: The adorable form is a great cover, and it requires sufficient food to enter monstrous form. Water makes them spawn more, while sunlight really hurts them. CR 4, fyi. A CR 13 troop-version is also provided. Neato!

The maternal hag (erroneously called “material hag” by its statblock header) clocks in at CR 8 and can transform the equipment of a target into child apparel with a nasty curse; the hag gets some serious mesmerist stares and spells, and the hag can execute multiple bites, swallow and grab. Swallow whole makes her look pregnant and causes Charisma damage; this ties in with her multi-target stares and hexes, for she gains a massive defensive boost if someone friendly or helpful is nearby – and she causes targets to have their mental age (see Childhood Adventures) regress. Oh, and guess what? Maternal hag changeling rules are presented as well. This is easily my favorite hag in all of Pathfinder.

Herkomurks are another critter that is unique – at CR 3, these aberrations are fluffy, Tiny and would be adorable, were it not for their massive teeth and quills. Whenever they consume freshly-killed, raw meat, they gain growth points, and they may make trample attacks by rolling over targets. With poison, quills, and paralytic poison (which has 4 variant penalties!), they are awesome, particularly since we get the modifications for all size categories from Small (CR 5) to Colossal (CR 20) – including attacks, DR, special qualities and attacks gained etc. Have you guessed the inspiration for these? 😀

In the beginning of this review, I mentioned the levialogi – well, there are new ones inside – the first being the Agrilogos at CR 17. As befitting of the creature type, we have a massive array of immunities, but also bladed tentacles that may decapitate you, deadly attacks and sprints. And yes, the subtype has been reproduced herein for your convenience. The write-up also contains two poisons – cattlemind, which makes targets pliable feebleminded, and liquid persuasion, which enhances the means to convince targets of pretty much anything. It’s actually puzzling that we did not have the latter before – love it! The pdf also presents a CR ½ cessilogos – barely animate globs of leviathan blood sans hosts, and they come with notes to act as Improved Familiars for nongood casters of 7th level or higher.

Cool. The pdf also introduces the Levian – failed levialogi that have entered a symbiosis with their hosts; this is represented as a Cr +0 template that nets darkvision 30 ft or extends a pre-existing one by that range. The character can emit a levialash pseudopod from its body, drawn and stowed as a manufactured weapon that executes slam attacks of one of the three physical damage types, chosen upon acquiring the template. The template gets +10 to Disguise to pass as the base creature race and imposes a -2 penalty to Charisma-based checks and skill checks as well as Sense Motive checks opposed by Charisma. Nice – this is genuinely player-friendly! The levian can choose the Second Consciousness feat and may not have shared consciousness. This feat represents the levian having gained enough agency, allowing it to act as an improved familiar sans own body; it has no physical ability scores, dies when you die and can only take purely mental actions. It can speak verbally, telepathically with the host body and gain shared consciousness as a spiritualist of your character level, but no Skill Focus and the bonus vs. mind-affecting effects is halved. The levialogos is treated as a phantom for the purpose of effect-shunting. I love this angle! Really cool, and it’s something that will be inserted in my campaigns!

Editing and formatting on a formal level are good – I noticed a few typo-level hiccups, but none impeded rules-integrity. On a rules-language level, the pdf is precise and well-wrought. Layout adheres to the series’ two-column full-color standard, and the pdf has a surprising amount of neat full-color artworks by Jacob Blackmon, with some critters seriously being among my favorite pieces by his pen. The pdf has no bookmarks, but needs none at this length.

The monsters herein are all killer, no filler, and warrant getting the bundle on their own. 5 stars + seal of approval, given without the slightest bit of hesitation – this is what creatures should be, an apex-level array of awesome, intelligent, and seriously wicked monsters, brimming with genuine creativity. Also, nominated as a candidate for my Top Ten of 2019.

You can get these inspired creatures exclusively here in the bundle!

Missed the cool Sleeping Rules? You can find them here!

The excellent Paranormal Adventures book may be found here!

The awesome Childhood Adventures tome may be found here!

Enjoying my reviews? Please consider leaving a donation here on patreon, or via direct donation.