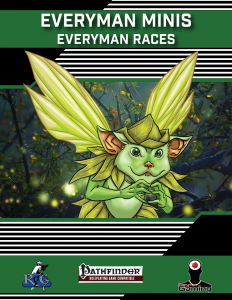 This „Mini“ is only available as part of the Klickstarter bundle, and clocks in at 29 pages, 1 page front cover, 1 page editorial, 4 pages of SRD, leaving us with an impressive23 pages of content, so let’s take a look!

After a brief history of some races previously introduced in other systems, we dive right into the first of the racial write-ups, which deserves some explanation: Much to my joy, the respective racial write-ups do feature pretty detailed notes on physical descriptions, physiology, life cycle, culture, cuisine and relationships with other races. This is particularly nice, since the racial write ups take the best of both worlds in a manner of speaking. The helpful “If you are an X…” and “Others probably think that you…” sections that Starfinder introduced have been applied here as well – and we get very detailed vital statistics tables that differentiate also between sexes, thus allowing the tables to account for different lifespans. Notes on ethnic groups and languages featured are also included herein, which put a huge grin on my face. If you’re familiar with the authors other races, you’ll know that they tend to come in as races that feel distinct and unique in how they are presented. Please bear in mind that the races presented here feel like genuinely organic cultures, not just like collections of stats. While I focus on mechanics in this review, it should be noted that each of the races has some serious appeal.

It should also be noted that we receive massive lists of favored class options for each race – one for every single Paizo class, including samurai, ninjas, vigilantes and even shifters has been provided, which is a huge boon. There also is a feat that is relevant for favored class options -. Versatile Favored Class requires that you belong to a race with a favored class bonus that may be selected regardless of class, and with this feat, you get the class’s favored class bonus in addition to either +1 skill rank, +1 hit point, or the general boon that can be taken regardless of class.

This pdf contains 4 different races, two of which may be familiar to fans of PFRPG, with the first being the Yroometji, the cool kangaroo-men race that previously suffered a bit from the limited space allotted in its everyman mini. Yroometji get +2 Con and Cha, -2 Int, are Medium humanoids with the yroometji subtype, have a base speed of 30 feet, low-light vision, and they have a pouch, with Medium yroometji capable of holding up to 1 cubic foot and 10 pounds in weight; these double per size category increase, or are halved for size reductions. Retrieving or transferring an item to the pouch is a swift or move action, but armor or a body slot item can prevent this, unless the armor/item has been specifically designed to accommodate this feature. Rules for the additional costs involved in doing so have been provided. Yroometji have an extraordinary ability to fly, with average maneuverability (As a minor nitpick – that is usually designated in the header of the ability in PFRPG, not in the text), but the movement must end on the ground or fall; +8 racial bonus to Acrobatics when jumping and the ability to always take 10 on Acrobatics checks made to jump complements this. Yroometji have a natural slam attack that can cause bludgeoning (tail) or piercing damage (feet) – defaulting to primary is not an issue here. The pdf contains the Deadly Slam feat, which allows the yroometji to increase the two slam attack options – feet can cause both piercing and bludgeoning damage (not a fan of the dual damage type) and increase critical threat range to 19-20m while attacks with the tail are treated as a larger size and as though having brace and trip. Other body parts may also be used to attack, but don’t raw receive these improvements.

There are, as noted before, two races that SFRPG-fans may be familiar with. Originally introduced in the Age of Eletrotech setting, the raccoon-folk nashi are Small humanoids with the nashi subtype, get +2 Intelligence, and low-light vision. They also get to choose two skills from a list and receive a +2 racial bonus when using these skills. Nashi do not take the usual -2 penalty for attempting skills that require tools with improvised tools, instead gaining a +1 circumstance bonus – this only applies to trained skills, and represents the race’s ingenuity. Like it! The nashi also are defined by their excellent sense of touch, which acts a s type of blindsense equal to their reach, though this is not extended by effects that increase reach, unless they last more than 1 round and apply to unarmed strikes. Cool!

The other race that fans of Starfinder may be familiar with, would be the skunk-folk called mephians. These fellows receive +2 Constitution, are Medium humanoids with the mephian subtype, have a base speed of 30 ft. and gain Skill Focus as a 1st level bonus feat, applying it to one of the social skills. They also choose 2 skills, which are added to their class skill list. Overlap with class skills from 1st level classes instead translates to a +2 racial bonus check. Mephians have a +1 natural armor bonus and, of course, they have their musk: As a standard action, they can attempt a melee touch attack, and if they hit, the foe must succeed on a Dc 10 + ½ character level + Constitution modifier save or be sickened for 10 minutes. The penalty is increased for poor creatures with scent. On a successful save, a creature is immune to this ability for 24 hours, and it made be used Constitution modifier +1/2 total level times per day. The mephians have 3 different options to enhance their musk: Musk Pitch increases uses of musk by 1 and lets the mephian use it as a 10-ft.-range spray. Musk Slap is a combat feat nets you a tail attack and lets you use this attack in conjunction with musk. Slightly odd – the feat mentions the option to affect a target more than once per round, which is RAW not possible due to the 24-hour caveat. That being said, this does not compromise the rules-integrity. Thirdly, there would be Musk Whirlwind is a unique twist on a musk-only Whirlwind Attack, with its own scaling mechanics for maximum spurts of musk per round. Usable as a standard action, this is an interesting alteration of basic musk engine.

Now, the strange creature you can see on the cover? That would be the grinnikin, the final new race included herein. Grinnikin get +2 Dex and Int, -2 Str, are fey with the shapechanger subtype and receive the change shape universal monster ability, but can only use it to change their size to Fine or Diminutive, and as you could glean from that, their regular size is actually Tiny. Grinnikin have a 20 ft.-movement rate and a fly speed of 20 ft. with average maneuverability Until they have 5 ranks in Fly, they need to end their turn on the ground or fall, retaining the implicit limitations of PFRPG. They have low-light vision and a 1d3 natural bite attack as well as an array of SPs that include constant feather fall (self only, reestablishes itself automatically after being dispelled), as well as 1/day ghost sound, memory lapse and prestidigitation. They are supreme omnivores and are immune to all ingested poisons and can safely chew, swallow and digest any substance with a hardness of 10 or less. Damaging items can damage the grinnikin until consumed. I love this! It has so many angles to creatively roleplay! The race is supplemented by two feats – one that may be taken by any fey,m the Fey Servant, which makes animal companions or mounts gain a bonus to Will-saves as well as scaling DR/cold iron, SR of master level +5 and change shape, and the means to assume a fixed Small or Medium shape as per alter self (not italicized). This accounts properly for types and Handle Animal use, if applicable. The second feat if grinnikin-exclusive, Grinnikin Dust, and requires Cha 13+ This feat nets you Charisma modifier +1/2 character level points, and you can spend 1 of these points as to create grinnikin dust, which may be thrown as a ranged touch attach, sprinkled on weaponry, used in melee touch attacks or the like as a standard action, except when charging a weapon, in which case it’s a free action. The weapon remains charged until the end of the grinnikin’s turn or dealing damage, replacing the weapon’s damage inflicted. The dust can stun, shrink, or put targets to sleep – all potent options, with scaling save DCs governed by Charisma, but the substitution of the effect for weapon damage keeps this in check.

Editing and formatting are very good on a formal and rules-language level. Layout adheres to the series’ two-column full-color standard, and each race receives their own kickass full-color artwork. The pdf comes fully bookmarked with nested bookmarks, allowing for quick and painless navigation.

Alexander Augunas provides a couple of genuinely cool races here, options that don’t just feel like an accumulation of numbers, but that have their own distinct identities. The races are well-crafted, unique and fun, making this a nice pdf/component of the bundle. My final verdict will clock in at 5 stars.

You can get these cool races exclusively as part of the bundle here!

Enjoying my reviews? please consider leaving a direct donation or supporting my patreon.