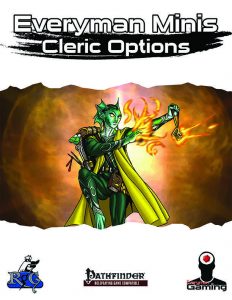 This installment of the Everyman Minis-series clocks in at 9 pages, 1 page front cover, 1 page editorial, 1 page advertisement, 2.5 pages of SRD, leaving us with 3.5 pages of content, so let’s take a look!

In a sidebar on the introductory page, we are introduced to the feat Domain Flexibility (minor complain: Benefits and Prerequisites sub-headers are not bolded properly). This feat allows you to choose to gain the powers of a subdomain of your chosen domain, or the domain powers associated with your chosen subdomain when preparing spells: You can basically switch them, depending on your needs, but only within one domain/subdomain micro-tree – so no switching between subdomains granted by different domains. Similarly, the feat has a caveat that prevents the switching out of locked domain powers. Kudos. A bit of flexibility, but not so much that it’d become problematic. Also: Kudos for not stumbling in the rules-language here!

The main meat of the supplement is devoted to a total of three new cleric archetypes, the first of which would be the Bloodseeker. These fellows are locked into the War domain or Blood subdomain and deities worshiped must grant access to the War domain. They get diminished spellcasting for non-domain spells and may use the War domain’s battle rage on herself; this nets the bloodseeker a +2 untyped bonus on atk-rolls and +1/2 cleric level, minimum 1, as a bonus to weapon damage rolls, but only with the deity’s favored weapon. Bonuses are properly classified as sacred/profane, depending on alignment. This rage lasts for 1 + Cha-mod rounds and replaces the first channel energy.

At 3rd level, 5th level and every 2 levels thereafter, the bloodseeker gains a rage power, which may only be used while under the effects of the battle rage. Before you ask: No, you can’t cheese this: Barbarian rage powers and those granted by the archetype may not be used interchangeably. Totem rage powers must correspond thematically to the domains available to the deity, which provides a helpful thematic consistency. This ability replaces later channel energy gains. At 4th level, the archetype can Quick Draw the deity’s favored weapon and gains a +2 bonus to critical hit confirmation rolls with it. Additionally, the archetype is treated as fighter levels for the purpose of feat-prerequisites. At 8th level, when dealing damage to a target with the deity’s favored weapon, the character may, as a swift action, sacrifice a prepared cleric spell of 1st level or higher, choosing one so-called injury, which lasts for a number of rounds equal to the spell’s level. These injuries basically represent debuffs: Penalty to AC or atk that are more severe versus the bloodseeker, bleed damage based on spell level, etc. Cool: Interaction with mundane and magical healing is properly covered.

The second archetype herein would be the Flame Warden, who gains proficiency with light armor and simple weapons and the deity’s favored weapon instead of the standard list. They also only get one domain, which must be the Fire domain, not its subdomains. These fellows channel fire via Elemental Channel (fire) and may only heal creatures of the fire subtype; channeling to harm may actually be used to either deal fire damage to all creatures without the subtype, or harm creatures with it. At 4th level, the archetype can shape the channeled energy into 30 ft.-cones or 120 ft.-lines. Cool: Ability mentions the effects of holy vindicator’s versatile channel and the synergy of abilities. At 8th level, the flame warden may expend 2 uses to make half that damage directly divine damage (analogue to e.g. flame strike); the ability may be used in conjunction with Quick Channel for 3 uses of the ability instead.

Additionally, first level nets the fire bolt ability, which may be used in melee as a touch attack or as a ranged attack with a range of 30 ft. It inflicts 1d6 + Cha-mod fire damage, +1 1 for every 4 cleric levels you possess. They are treated as one-handed, light weapons and may be dual wielded. Weapon Focus (ray) doesn’t apply, but fire bolts qualify on their own as a candidate for Weapon Focus, applying the benefits of the feat to both melee and ranged use. Basically, we have a massive tweak of the default ability here. Additionally, flame wardens may choose to lose prepared spells to spontaneously cast fire elementalist spells as divine spells.

The third archetype would be the Spellkeeper, who is proficient with simple weapons and light armor as well as the deity’s favored weapon. The archetype suffers from arcane spell failure when wearing armor or shields not covered by these proficiencies. The spellkeeper is locked into the Magic domain and gains arcane bond at 1st level, though she may not choose familiar as an option and, if weapon is chosen, must choose the favored weapon of her deity. The archetype gains the arcanist’s arcane reservoir, with levels stacking with other arcane reservoir-granting classes, if any. The archetype may lose prepared spells other than orisons to cast spontaneously any spell both on sorcerer/wizard list and cleric list (which may require a bit of list-making); this includes domain spells and replaces spontaneous casting.

At 3rd level and every 2 levels thereafter, the spellkeeper gains an arcane gift, which can be arcanist exploits, prerequisite-less Arcane Strike for use in conjunction with her spells, the option to also spontaneously convert prepared spells into spells on sorc/wiz-list, but NOT on the cleric list (which eliminates the one restriction there) – but thankfully, the spell must at least be one level lower than the lost spell and requires Spell Focus with the spell’s chosen school, preventing full-blown abuse there. Mystic recall and spellstrike may also be found here. This archetype is really potent – basically a graft of magus and arcanist atop the cleric-chassis…and it does work, even though it probably is only suitable for the more high-powered campaigns, courtesy of the extreme flexibility granted by the wildcard-y spell-selection.

Editing and formatting are very good, I noticed no rules-relevant problems in spite of the complexity of the material offered. Layout adheres to Everyman Gaming’s two-column b/w-standard and the full-color artwork is nice. The pdf has no bookmarks, but needs none at this length.

Alexander Augunas’ cleric options are executed with the precision we have come to expect from him; the focus here lies on the tweaking of the cleric’s engine to account for options reminiscent of hybrids, but without full-blown escalation. The three archetypes are per se well-crafted and fit pretty precise niches, with the bloodseeker perhaps having the most universal appeal; the flame warden is pretty specific and the spellkeeper is rather strong for my tastes, courtesy of its massive flexibility. That being said, the material is well-executed and worth taking a look at. My final verdict will hence clock in at 4 stars.