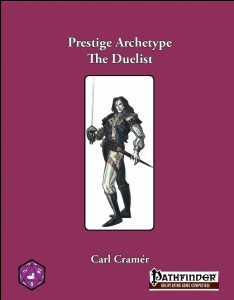 The Duelist receives d10, 2+int skills per level, full BAB-progression, good ref- and fort-saves and proficiency with simple and martial weapons as well as light armors and shields. While only lightly armored and wielding a manufactured weapon, the duelist adds up to class level Int-mod to AC and CMD and adds class level to damage when attacking with light or one-handed piercing weapons, but only against targets with discernible anatomies. Additionally, the prestige archetype receives weapon finesse at first level and dodge and bravery at 2nd.

At 3rd and 13th level, initiative increases by +2 respectively. At 3rd level, parry is gained – and well, it’s different from what you imagined. The prestige archetype does not need to forego attacks to executes parry anymore, with the maximum number of parries per round now being governed by the total class levels of the prestige archetype, scaling up to 4 parries per round at 18th level. While the size-discrepancy penalties are still here, the mechanic still relies on competing attack rolls. Now as an interesting balance mechanic for AoOs, the duelist becomes staggered on the round following after executing one or more parries – which would be per se cool, were there no ring of ferocious actions, which allows you to negate that condition 5/day as a free action – for only 3000 GP. I’d advise DMs to disallow this item when using duelists. Another issue is that the class does not specify whether its parries can be used to prevent combat maneuvers – while logic dictates they can, the ability does not specify so. Personally, I am not a fan of d20 vs. d20 in Pathfinder, mainly due to the discrepancy and role of luck in the comparison of dice, but math-wise, as far as comparing rolls go, this still works, so no penalty rating-wise.

At 5th level, duelists may execute AoOs after successful parries and increased ref-saves, mobility, +int-mod AoOs per round (stacking with combat reflexes) -generally okay abilities. At high levels, AoOs versus any target who misses a defensively fighting/total defense-using duelist and AoOs versus withdrawing foes make for nice effects. At the highest levels, DR and additional, nasty effects for crits are added to the mix.

The Duelist-PrC is one of those anachronisms from the beginning of PFRPG, indebted to what amounts to obsolete rules-philosophy and 3.X remnants and thus, I was looking forward to this prestige archetype. The Duelist as re-envisioned by Carl Cramér herein makes for an interesting take and should generally be considered solid – I am not a fan of the parry mechanics, but at least they are not the horribly broken mess that was the PrC’s original parrying – no longer being useless due to the separation from losing attacks, the parry-feature as provided herein is pretty strong. I am not a big fan of roll vs. roll, but generally, the prestige archetype can be considered pretty solid in its mechanics and at least, the scaling of roll vs. roll in this case is well-implemented. I’d probably be much more enthusiastic, had Dreadfox Games not covered the dexterous, smart combatant infinitely more challenging and cool with the superb Swordmaster. In direct comparison, the new duelist, mostly due to the abysmal heritage it had to face, is just a pretty defensive class without truly stunning tricks to pull off – not bad, but also far away from blowing me away.

This is definitely an improvement over the rather sad original PrC, but it still falls quite short of what it could have easily been – hence, my final verdict will clock in at 3.5 stars, rounded up to 4 for the purpose of this platform.

You can get this nice prestige archetype here on OBS and here on d20pfsrd.com’s shop!