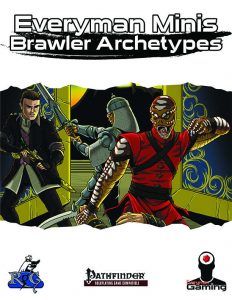 This Everyman Mini clocks in at 7 pages, 1 page front cover, 1 page editorial, 2.5 pages of SRD, leaving us with 2.5 pages of content, so let’s take a look!

This pdf begins with a brief introduction and then, the pdf sports two new feats: Feral Pugilism lets you use a natural attack in conjunction with abilities of Improved Unarmed Strike, which now makes the chosen natural attack behave as a light weapon instead of as a natural weapon. The rules-language is cleaner, but the combination of unarmed strike benefits in conjunction with natural attacks can still be rather potent. Versatile Pugilism lets you choose one melee weapon, which may be a natural attack – this attack may be used in conjunction with brawler’s flurry and makes it count as a close weapon for the purpose of close weapon mastery. In the revision, the feat now locks you in the benefits of unarmed strike, keeping the focus of teh class on brawling. The benefits can still be pretty hefty, but rules-wise, this is much improved.

The pdf then proceeds with a selection of new archetypes: The brute is proficient with simple weapons and great club as well as light armor and shields (except tower shields). The archetype gains Weapon Focus (club) as a bonus feat at 1st level and applies all weapon-specific benefits for the club to the great club as well, and vice versa. At 5th level, the brute’s melee attacks with clubs ignore 1 point of DR, + 1 point at 8th level and every 3 levels thereafter. DR/- is not ignored and the benefits stack with Penetrating Strike and its Greater brother. This replaces unarmed strike and brawler’s strike. Brawler’s flurry may only be used with clubs and great clubs and 8th level modifies close weapon mastery to instead apply to clubs, using the brawler’s unarmed damage at -4 levels as a possible substitution, if it exceeds the damage of the club. The revisions of the feats make the archetype viable.

The hurling dynamo replaces proficiency with the close weapon group with thrown weapons. The dynamo’s flurry only works with unarmed strikes and thrown weapons, but both may be used within a flurry, with ranged weapon attacks counting as benefiting from Quick Draw while flurrying. The flurry can now explicitly be combined with rapid Shot. 2nd level locks the character into Precise Shot as a bonus feat. Instead of maneuver training, 3rd level yields either Ranged Feint or the option to use a chosen combat maneuver within one range increment, maximum 30 ft., using Dex-modifier to calculate CMB. This is penalized, though. The first attack of a flurry may be replaced with a maneuver or action chosen with this ability (nice catch re feinting!) and 7th level and every 4 levels thereafter yield another maneuver choice. 5th level modifies the close weapon group mastery to instead work, at -4 levels, based on brawler unarmed damage, provided that damage would exceed that of the weapon.

The kiai master replaces maneuver training with menacing shout at 3rd level, whenever the character hits at least once in a brawler’s flurry, she can make a demoralize attempt against a target thus hit as a swift action. 7th level allows for the intimidation of all targets within 30 ft. that saw the hit. The range of this area of effect improves at 11th level and every 4 levels thereafter. Starting at 4th level, the demoralize attempt, if successful, causes 1d6 sonic damage, but a given foe can only take this damage once per round. 10th level adds +1d6 sonic damage and deafened to the target for 1 round, and 16th level increases the damage to 3d6 and increases the deafened condition to 1d4 rounds. This replaces knockout.

Finally, there would be the style savant, who only gains the benefits of style feats and combat feats based on style feats when using martial flexibility – the style savant can ignore the feat’s respective prerequisite. Yep, this allows you to directly skip ahead to the final feat in a style chain. That is problematic, as the ignoring of prerequisites contradicts the central limitation of martial flexibility and prevents the viable reference to the default ability to clear the rules-language. Also from an action economy perspective – can the respective later feats building on a Style feat only be used when entering that style, which RAW, the archetype can’t when not having chosen the respective Style feat? You could use this, theoretically, to take Crane Riposte sans Crane Style. You couldn’t, RAW, use it when not in the style, but yeah. This is still weird. At 1st level, the style savant treats his brawler level as fighter or monk levels for prerequisite purposes and also as the number of skill ranks in all skills for the purpose of qualifying for style feats or feats that list one or style feats among the prerequisites, replacing martial training. Maneuver training is replaced by two abilities – savant’s style, which lets the character mix two styles known into a more flexible style, allowing the character to be in two styles at once – cool: The action economy here is concise and at 19th level, the character can be in 3 different styles at once. At 7th level, the style savant may use martial flexibility as a move action to enter all allowed stances, which improves to 15th level as a swift action. he verbiage here has improved to the point where I consider the component precise

Editing and formatting, on a formal level, are very good. On a rules-language level, the pdf has improved significantly as well. Layout adheres to Everyman gaming’s two-column standard with a b/w-background and a nice full-color artwork. The pdf has no bookmarks, but needs none at this length.

Sasha Hall’s brawler options have in common that they seek to generate new choices and engine tweaks for the brawler class, which is generally something I applaud. The improvements made to the pdf enhance it significantly. It’s is not perfect, but a vast improvement and proof that Everyman Gaming cares. This upgrades the verdict to 3.5 stars, rounded up due to in dubio pro reo.