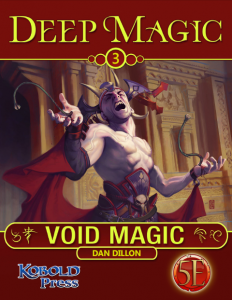 This installment of the Deep Magic-series clocks in at 11 pages, 1 page front cover, 1 page editorial, 1 page SRD, 1 page advertisement, leaving us with 7 pages of content, so let’s take a look!

The heart of void magic is Void Speech – the spoken word, the glyphs of this strange language, exist in a paradoxical state, in that they degrade physical reality around them – though never to the point of dissolution: Inscribed Void Speech corrupts and degrades, but does not annihilate its own matter.

Void magic is the tradition of tapping into the horrid magics of the Great Old Ones and the role of the tradition in Midgard is elaborated upon. It should be noted that these spells cannot be learned via spells gained via level-progression – these magics need to be learned from a practitioner or a proper spell-book, retaining GM-control in that regard. Void magic fundamentally behaves like arcane magic, just fyi.

There are two feats introduced that make use of the unsettling nature of Void Speech – the first would be Void Channeler, which lets you, as an action, utter a phrase in its horrid cadence. A creature within 10 ft. of your choice must succeed a Wisdom saving throw (Save DC scales properly) or suffer from the frightened condition, while other beings nearby suffer from somewhat unsettling, cosmetic effects. Additional uses before completing a short or long rest inflict increasing amounts of necrotic damage to the character. The second feat, Void Scribe, lets you use writing utensils as an action to inscribe a glyph on an object – this object then continues to take 1d6 necrotic damage per turn and in order to retain the glyph’s structure, you have to maintain concentration AND succeed a DC 10 Constitution save each round. This is a pretty cool idea, though it also is one that could have carried a bit more than item destruction – two spells presented herein require papers with the glyphs as material component and that’s it. Oh well, perhaps in a sequel book?

The pdf also provides an arcane tradition, namely the void speaker. Starting at 2nd level, time and gold required to write void spells in the spellbook is halved and when gaining a level, 1 of the spells learned may be a void spell, allowing for relatively reliable access to the strange magic. Also at second level, as a bonus action before casting a spell of 1st level or higher, which disorients a creature chosen from those affected by your spell, imposing disadvantage on the next attack roll or ability check the creature makes before your next turn.

Starting at 6th level, when damaged by a creature within 60 feet, you can use your reaction to cause 1/2 wizard level + Int mod necrotic damage to the creature, usable Intelligence modifier times before requiring a long rest to regain uses. Starting at 10th level, void magic spells with one target may target two creatures instead and you gain advantage on Con-saves made to maintain concentration on void spells. Finally, at 14th level, you can use your action to utter a phrase in void speech – this lets you choose a point within 60 feet, dimming the light in a 20-foot radius around that point for 1 minute. Creatures hostile to you suffer from disadvantage on Wisdom checks and vulnerability to necrotic damage. Additionally, such creatures (Allies are fine!) starting their turn or entering the area for the first time take 3d6 necrotic damage, half as much on a successful Con save. The ability recharges on a completed short or long rest. It should be noted that these abilities, being reliant on vocalizations, can’t be used when unable to speak, which is a nice thematic catch.

The pdf also features a total of 13 void magic spells: conjure minor voidborn (at 5th level) and its 7th level brother, conjure voidborn let you call forth fiends or aberrations in a nice summoning variant. Why nice? The nasty creatures can’t attack you and yours, but they can, oopsie-daisy, affect allies via secondary effects – you have to tread lightly there, which fits perfectly with the flavor of the magic. There are two void magic cantrips: Crushing Curse nets you a reliable means of dealing 1d6 psychic damage to a creature within 60 feet, also deafening that creature. The damage increases over the levels…and here, I’d *usually* complain about psychic damage being one of the strongest damage types in 5e, but the balancing of the cantrip is actually really clever and immaculate: You see, it can only affect creatures that can hear you, so as soon as you fail the save, you won’t be affected! And yes, creatures can try again each round to end the deafness. Kudos indeed! The second cantrip would be ward of misfortune, which targets a creature nearby and imposes a d4 as penalty to the creature’s next save. Protection from the Void nets a willing creature resistance to necrotic and psychic damage as well as advantage on the saves versus void magic…draw that elder sign…

At 2nd level, we can find destructive resonance, a 15-foot cone which inflicts 4d6 psychic damage (more with higher spell slots) and prevents creatures damaged from taking reactions. Usually, I’d say that the “no reactions” aspect should be negated on a successful save, but the low range and inherent danger of the spell serve as balancing mechanics there. Maddening Whispers can render a target incapacitated with 0 speed on a failed Cha-save, but only has a range of 30 feet and demands your action to maintain its effects, which renders it a tactical option, but not one that will break the game.

At 3rd level, we find Void Strike, the option to fire 5d8 necrotic ranged spell attacks that also frighten the target until your next turn. The no-save frightened-effect is something I’d not particularly keen on, but I do like that the spell ties in with the terrain – you gain advantage on attack rolls versus those within dim light or darkness. There’s a cool Darkest Dungeon reference in discussing this mechanic, but I can’t enunciate it right now. At 4th level, nether weapon is cool: Touched weapon is treated as magic, inflicts a bonus 2d6 necrotic damage…and the creature hit by it can’t be healed until the start of your next turn. NICE. Living Shadows at 5th level lets you conjure forth a 15-ft-radius spread of restraining shadows (resisted by Strength save). Creatures that start their turn restrained gain one level of exhaustion. Restrained creatures can use their choice of Str or Dex check to free themselves. I am not perfectly happy with this one -considering that even one level of exhaustion imposes disadvantage on ability checks, escape becomes less likely. Sure, the spell is one spell-level higher than evard’s black tentacles, and has 5 foot affected area less than it, but it also does not require concentration, unlike EBS. Personally, I’d have kept concentration as a limiting factor here, mainly since my 5e games tend to place a high value on exhaustion/resource management…and it remains a 6-step killer. I do get the rationale behind the design, though, given how void magic is a locked discipline for most casters.

At 6th level, we can find Life Drain, which lets you determine one point within 90 ft. – those within a 15 feet of the point take 10d6 necrotic damage, half as much on a successful Constitution save. For each target damaged, you can choose one creature in range and have it heal half the amount of necrotic damage you rolled. I have a minor, aesthetic quibble here: I think it should be damage actually inflicted, not rolled. While using a bag of kittens and this spell to heal is a colossally dumb idea, something within me still twitches here a bit. That being said, I get the rationale for the verbiage as provided – basing the heal on damage inflicted versus damage rolled would have complicated the wording of the spell. (Plus, this is something that’s pretty easy for the GM to house-rule .)

The 8th and 9th level spells, btw., would be the void magic spells I mentioned that actually require an inscribed void glyph as part of their material components: 8th level’s glimpse of the void has a range of 120 feet and all targets within a 30-foot cube must succeed an Int-save, rendering the targets insane on a failed save and placing movement under GM control. The 9th level spell, void rift, generates a 10-foot radius tear in reality, which is then surrounded by 40 feet of difficult terrain. Creatures within the area must succeed Strength saves or be pulled towards the rift and those in contact with it take necrotic damage and are blinded and deafened. Very cool – though the spell takes its toll on the caster, inflicting necrotic damage each round it is maintained.

Editing and formatting are top-notch, I noticed no glitches. Layout adheres to Kobold Press’ gorgeous two-column full-color standard and the pdf sports several fantastic full-color artworks I haven’t seen before. Big kudos in the aesthetics-department. The pdf comes with bookmarks, but not for the individual spells. Considering the length of the pdf, that’s okay.

Dan Dillon of the four horsemen delivers once again here. Void magic feels potent, alien, risky and still easy to grasp. The astute reader may have noticed that all my complaints (the few that I managed to dig up) boil down to nitpicks in details and aesthetics that can be reduced to “slightly different opinions” – the design here is pretty much immaculate and often rather inspiring. I am particularly enamored with the balancing mechanic employed for the psychic damage-causing cantrip and similar subtle, elegant design decisions. Now personally, I understand why both feats and their effects are not more intricately tied to the spells – a decision made in order to retain the broader appeal of the type of magic. Still, I couldn’t help but feel like both feats almost demand being tied to spellcasting. To cut a long ramble short: I’d love to see the engine of void magic expanded. It can carry more than it does. What more can you ask of such a humble little pdf? It actually left me wanting more! So here’s to hoping we get Void Magic II at one point. I forgot my verdict? 5 stars…given sans hesitation, since all my quibbles boil down to aesthetic and very minor differences in design opinions! The only reason this does not get my seal would be the brevity – the concept can carry so much more and could have used a couple more pages to develop its mind-shattering impact beyond the presented options.

You can get this awesome pdf here on OBS!