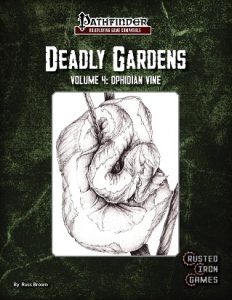 This installment of the Deadly Gardens-series clocks in at 6 pages, 1 page front cover, 1/2 a page SRD, leaving us with 4.5 pages of content, so let’s take a look!

We begin this installment of the Deadly Gardens-series with 3 new feats, the first of which mitigates the penalty of Handle Animal to deal with plant creatures and allows you to use it in conjunction with plant creatures bereft of Intelligence. The second feat, Toxin Wrangler, lets you harvest poison from living creatures with an indifferent attitude towards you. Third, Venom Doctor, is intriguing – it lets you use poisons to treat diseases – the patient suffers the effect of the poison once, but is not further poisoned, with the next save DC versus the disease the patient has to make being decreased by an amount equal to the poison’s DC, up to a minimum of 5. Additionally, you have no risk of poisoning yourself when making poison, harvesting poisons or treating diseases or afflictions. I like the idea, though, depending on the importance of diseases in your game, I’d suggest, depending on campaign, 1/2 DC for grittier games – just an observation, mind you!

Now the next section of this book may, on its own, be worth getting this pdf. Why? Because it collects a metric ton of poisons from creatures in the bestiaries in a MASSIVE table that exceeds one page in scope, providing an easily referenced collection, with yield of harvested doses, market prices, etc. all included. And yes, there are some new ones (variants of magical, poisonous animals) here as well. Kudos for this section!

Now the eponymous ophidian vine comes in two iterations here – one at CR 1/2 and one at CR 4 – and yes, the b/w-artwork used for the critter is, as we’ve come to expect, gorgeous! Obviously, to maintain thematic consistency, the creature has a poisonous sap and the greater variant can be pictured as basically a stronger, tougher iteration of the snake-shaped vine. All in all, surprisingly, the creature this time around feels a bit…bland? Snake + plant…very basic, particularly in relation to the rather unique creatures featured in the series so far.

The pdf also sports two natural items, one would be aforementioned poison sap, with the second being basically the upgrade for the greater version’s sap.

Editing and formatting are top-notch, I noticed no glitches. Layout adheres to Rusted Iron Games’ two-column full-color standard and the pdf comes fully bookmarked, in spite of its brevity – kudos! As mentioned before, the b/w-artwork by Becca Bean is simply stunning.

Russ Brown’s ophidian vine is an odd one – while usually, the creatures are the stars in these small supplements, this time around I found myself most enamored with the poison-table and the harvest-poison-from-living feat. While I adore the idea of a serpentine plant creature, the build itself is not that extraordinary, though it should be considered to be solid. Generally, I have no significant complaints regarding this book. While the animal-handling feat would have imho warranted animal/plant companion stats for the ophidian vine, I am not going to penalize this book for the lack here. However, I do consider the creature itself, at least this time around, to simply not be that interesting. Note, though, that the poison-table in itself already may justify getting this book.

All in all, this is a good little book, worth the low asking price. My final verdict will clock in at 4 stars, with particular usefulness for people who want the great poison-table.

You can get this nice, brief supplement here on OBS and here on tabletoplibrary.com!