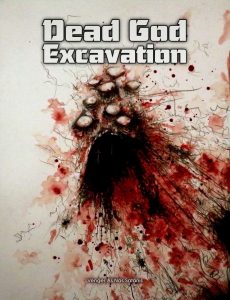 This module clocks in at 15 pages, 1 page front cover, 1 page editorial, 2 pages of Kort’thalis glyph, leaving us with 11 pages of content, so let’s take a look!

So, first things first: This module was made for Crimson Dragon Slayer, using Venger’s FREE rules-lite dark fantasy rules. The adventure itself, is in presentation, very much an old-school module, in that it eschews read-aloud text and the like for the most part – there is a box provided for a key scene. When using said rules, a brief table for some effects a cleric might have on unearthly creatures is a potent angle. 4 rumors and 4 reasons for the PCs to arrive at the scene of the adventure are provided. Before the PCs reach the excavation site, they will have to deal with fully-statted winged bat-demon-things. Combat-relevant beings like these tend to be statted for Crimson Dragon Slayer, noting HP and dice pool, but conversion should not be too hard for most old-school GMs, should you use another system.

NPCs are noted with flavorful descriptions and motivations, but don’t have stats. The biggest hurdle, conversion-wise, would be a “spell”, which is thankfully slightly tighter in its codification that CDS’s in my opinion non-functional free-form magic system, which boils down to “I try to convince the GM this works.” (Yeah, I will forevermore complain about the like – I just don’t enjoy it. No, I will not penalize the pdf for this.) The module presented sports a couple of Venger’s trademarks: It is very high-concept, has a couple of delightfully nigh-unpronounceable names and focuses on presenting a situation, without prescribing how it’ll run its course. The adventure features a stunning full-page full-color artwork, but not map for the complex to be explored. It should be noted that I can see this work particularly well for DCC’s aesthetics or LotFP, should you be playing those systems.

So, the PCs arrive at basically an archaeological dig, where one person actually has the Al Azif (rename it if you’re as tired as I am of dragging the poor ole’ Necry around) and from nobility to a Rosicrucian and a sage, there are some interesting NPCs to interact with. Touching the strange metal of the tomb that is explored can btw. have disquieting ramifications. When the sage’s brother arrives, he consults the book and deems the excavation unsafe. No one listens. Sure, his agenda is black as the night, but he, technically, is right. As antediluvian air escapes from the breached sepulcher, the PCs can wander into a strange dungeon where drops of acid drip from daemonic flesh, and ultimately lay their eyes upon the eponymous dead god, sleeping or dead. Indeed, a PC may unwittingly bond with a horrific alien entity that acts as basically a symbiotic, living artifact that can halt the flow of time, a servitor creature that may well kill the wielder, one in service to the dread inhuman god-thing lying there. A dark wall contains mighty glyphs that contain a superbly potent spell; essential salts may be consumed to speak to the high priest of the fallen deity and worse, there are hatchlings…

The finding of the dread great old one/deity may well end civilization, the start of a truly apocalyptic campaign…if you, for example, enjoy Shadows over Vathak, it may make for an interesting prologue to the proceedings hundreds of years later. Or you can use this to start something weird. This module pulls out the biggest punches of the mythos in the very first session, connecting because they are not expected then, but rather at the end of a campaign. This presents a couple of interesting variations for you: As the pdf closes with ideas for the benefits of having a dead god under your kingdom. The angles/suggestions here literally can govern whole campaigns, making this a truly efficient kick-off module.

Editing and formatting are very good, I noticed no serious glitches. Layout is gorgeous and one of my favorites in the whole Kort’thalis catalogue: With shades of purple and orange, blood-spatters and the like, Glynn Seal really delivers here. The b/w-artworks are nice, and the full-page full-color piece is fantastic and not something I expected to see in such an inexpensive supplement. The pdf comes fully bookmarked with nested bookmarks and a second, more printer-friendly version. Kudos!

Now, Dead God Excavation is not a hand-holding module; it is a sketch for you to fill out; it requires that you flesh out the main locale, potentially stat the NPCs, etc. It has no synopsis that would make spontaneously running it easier. Here, I get why. This is a proposition for a whole campaign or at least a story-angle, disguised as a brief introductory module. A Gm should think carefully about the ramifications of the adventure, of how it will shape the future. The presence of a variety of very potent concepts usually reserved for endgame-scenarios means that this is deadly; greed can kill PCs; so can curiosity. This is unforgiving, but it is brutal for a reason. It makes sense in the context of the adventure. The high impact nature of the module and clever use of player-expectation subversion makes for a fun and ultimately cool scenario. Sure, as always with Venger As’Nas Satanis’ relatively free-form modules, you’ll have to do a little more work structuring/fleshing out components, but for $2.50, it is worth getting!

That being said, I think that this offering suffers a bit from its presentation – DGE can’t seem to really decide whether it wants to be a toolkit/campaign-theme or adventure; as a toolkit, it is a success – the setting of the stage it delivers, is fantastic and evocative. However, the whole thing is billed as a module, and as such, it is more sketch-like than it should be. The descriptions and prose are top-notch, but the adventure doesn’t offer that much meat/substance. As a module, I think this would have benefited from being less abstract, from being more concrete. On the other hand, the aspects of the toolkit function basically almost invalidate the function as a module. No GM/referee/judge will run this as presented. It doesn’t have sufficient details for that; it’s not intended for that. At the same time, the suggested turn of events and characters make the toolkit-aspect feel less customizable than they are.

DGE would have made a truly outstanding, high-concept toolkit for a campaign, had it gotten rid of its pretensions of being an adventure. As written, it does not really qualify as either adventure or toolkit as perfectly as the quality of the prose and set-up would otherwise guarantee – it tries to have its cake and eat it, too, and is weaker off for it. To cut a long ramble short: This is a phenomenal inspiration for a game; a great little supplement to scavenge materials and scenes from, and, much like the eponymous dead god, a nice place to build a campaign on – I just wished it focused structurally in its presentation more on embracing being the modular toolkit that it wants to be. As such, my final verdict will clock in at 4.5 stars, but I feel I can’t round up for this one.

You can get this inspired premise here on OBS!

Venger’s current kickstarter for a new Alpha Blue module has just 48 hours to go! You can check it out here!