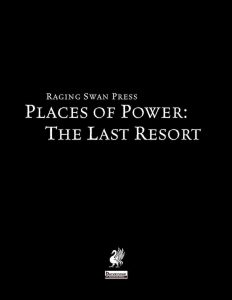 Speaking of diverse: This pdf follows the expanded formula of the newer Raging Swan Press offerings, meaning that we get tailor-made adventure-hooks for a wide variety of the different locations. What about a quest to get a lily straight from the abyss or a murder investigation, which certainly should be interesting in this place? With the chiefs of the inns being high-level beings, magic is pretty dominant, and the place actually does represent that in a few details, which can offer tangible benefits. Kudos for making this, also mechanically, a place of power!

Editing and formatting are top-notch, I noticed no issues on a formal or rules-language level. Layout adheres to Raging Swan Press’ elegant two-column b/w-standard and the pdf sports really nice b/w-artworks and cartography. The pdf comes in two versions, one optimized for the printer and one optimized for screen-use. Kudos! Both pdfs are fully bookmarked for your convenience.

So yeah, all in all, I heartily recommend this if you need an unobtrusive minor planar hub/means to get the PCs somewhere/way of introducing strange critters. My final verdict will clock in at 5 stars.