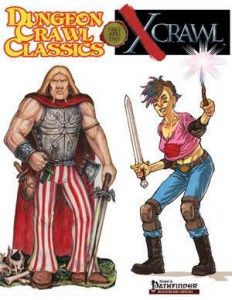 This offering, originally released for Free RPG Day, clocks in at 26 pages, 1 page front cover, 1 page editorial, 2 pages of advertisements, 1 page back cover, leaving us with 21 pages of content, so let’s take a look!

This booklet contains two adventures, “The Imperishable Sorceress” by the esteemed Daniel J. Bishop, a DCC adventure for 1st-level characters, and the “2013 Studio City Xcrawl” for Maximum Xcrawl, which employs the Pathfinder rules – penned by none other than Brendan LaSalle. Both adventures come btw. with an array of pregens – big kudos for their inclusion!! The DCC-adventure has a fantastic map of its setting – it is exciting, cool and stunning…I just wished that the pdf was layered, or sported a second version to allow the judge to cut up a player-friendly version sans keys, secret doors, etc.

Anyhow, you know how this goes, right? The following is a discussion of adventures and as such, it will contain MASSIVE SPOILERS FOR THE DCC MODULE. Potential players should jump ahead to the conclusion.

Aeons ago, the Cleft Mountains were situated below the sea, home to a strange, highly intelligent insect-race, a cross of scorpions and centipedes; these entities are who carved these halls, which are now the seat of power of the eponymous, imperishable sorceress, also known as Ivrain the Unkind. This sorceress has happened upon the secret of eternal youth…of sorts. Her research allowed her to grow an undefeatable body in her vats, but the alchemical waste she produced did raise one of the ancient Builders from sleep. Wresting control from her, she cracked her skull. Her spirit remains bound to this complex, to be more precise, to her star stone, and her deadly, demonic minions remain. However, via the coins bearing her countenance, she can send her mind across the land, calling out to sucker…her, I mean “valiant heroes” – and thankfully, one of the heroes carries her blood, allowing her to call to the “blooded” PC.

Now, here I need to comment on one amazing aspect that most reviewers probably wouldn’t care about: The doors in the complex? They are strings of adamantine wires that relax when touched – the alien Builder’s equivalent of doors. It is a small thing and while they may be “locked” or “unlocked” by builders, it is flavor that I adore, that provides a unique sense of the strange here. As always, we get a handy encounter summary. We do not begin directly with the complex exploration, but first have the PCs test their mettle by ascending towards the complex. In order to reach the entry, the PCs will have to brave the weather as well as savage, degenerate tribesmen or the deadly degenerate cold stinger – a descendant of the builders, reduced to mindless hunting. Walking into the ancient complex, the PCs will have to survive the spirits of predatory fish and finally meet up with Ivrain’s spirit – who begs the PCs to help, while also advising caution – the blooded PC may well use the star stone, but since it can only be used once…well, she has no intention to remain as she is.

Exploring the complex, the PCs may unearth pseudo flesh – quasi-organic putty that can prevent scarification…but more dangerous: 1000 feet away, behind gratings and in stasis, there is the Builder, and the entity can send forth ectoplasmic filaments that may well result in the Builder hijacking the body of one of these primitive mammals…Among the treasures, a nasty, demon-hating blade called Nightraker may be found…as may an adamantine mole. Ultimately, the PCs will need to survive wasp-things, wrest the star gem from a mighty Type II demon (who is about as cooperative as you’d expect)…and provided they have not fallen to a very splat-worthy death, the PCs can still screw up in a rather diverse and delightful array of ways: Surprise: Putting Ivrain in her imperishable body is a bad, bad idea. But hey, the chthonic entity that has constantly hassled the PCs may well take over that body, so there is a decent chance that such foolish PCs may escape…though frankly, it remains to be seen if the Builder possessing Ivrain would be better…

The book then proceeds to present the 2013 Studio City Xcrawl adventure – Division II, levels 6 – 8. The Xcrawl is run by DJ Prime Time, a clever media wizard, who is seeking to break the media’s stranglehold on its audience. The Studio Xcrawl is a competitive event: 5 groups are participating in it, and in the end, a Clap-o-Meter will determine the winner! So yeah, the task of the PCs is not to simply crawl through the dungeon, but to do so in STYLE! After a brief explanation of nomenclature, the nature of Xcrawl, etc., Brendan LaSalle’s module properly proceeds: We get detailed lead in flavor text, as the audience sings “America Super Potens Maximus”, the DJ introduction…and of course, the live studio audience! (As an aside, this probably would gel well as a sidearm of Iron GM…just sayin’) – holographic exotic dancers act as treasure…but there is a risk: There is always a chance that, instead of treasure, a whammy monster is called forth! The PCs will have to be smart regarding risk and reward…

There are a couple of pretty cool rooms to be found – but, at this point, I’d have to go into SPOILERS. So yeah, potential players should jump to the SPOILER’S END-section.

All righty, so, there is, for example, a room, where the walls are closing in, while monsters wearing sponsor shirts attack. Oh, and you have to open three locks, sans magic. All are trapped. Problem here: The walls are closing in and while it is in the interest of the DJ to have the PCs trigger the traps (Flaming walls! Bladed column!!), there is a bit of an issue here: You see rigging/disarming traps in PFRPG takes different amounts of time based on the complexity of the device; now, one could assume them to be simple…but effect-wise, they very much look like complex/intricate devices.

And yes, this is certainly something a good GM can handle…but it’s still a rough patch that could have been avoided. Defeating dungeon wights allows the PCs to get a break before things become challenging: The PCs wander into a room, cloaked in illusions to appear like the outdoors: On tiers of a massive tower, there are glowing eggs; there are very real, armored terror birds (with remote-controlled crossbows!) and worse, a team of excellent kobold sappers starts firing a trebuchet at the tower, attempting to wreck the eggs and thus, the PC’s chance of winning here! What about dealing with a flying shadow squid that thinks with random portals and can attack through them? Yeah, there are some really cool challenges here! After braving such ordeals, cowardly PCs may leave – to the boos of the crowd (and loss of fame), but true heroes will get a chance to duke it out with the potent boss of the crawl, the fire giant Koholorone! Defeating the giant should yield the PCs a proper triumph. 3 magic items are included in the write-up, and the map of the crawl, studded with sponsored advertisements from the Xcrawl world is cool – though we do not get a player-friendly iteration of the map.

Editing and formatting are very good, also on a rules-language, with only minor hiccups one in a blue moon. Layout adheres to a printer-friendly two-column b/w-standard. The cartography for the DCC-module in particular is excellent, though I did find myself wishing we got proper, player-friendly versions. The pdf only sports rudimentary bookmarks to the start of the respective adventures, but on a plus-side, the inclusion of copious pregens for both modules is a big plus.

Daniel J. Bishop and Brendan LaSalle deliver two excellent adventures here; the Studio City Xcrawl is bonkers and fun in the right ways (and not yet as brutal as later offerings in the setting), while Daniel J. Bishop once again shows why he is one of my favorite authors for Sword & Sorcery-style adventures; the right combination of the familiar and weird blend with great visuals and extremely evocative details. Both adventures are radically different in themes, system and setting and both can be considered to be excellent examples of their craftsmanship. That being said, I found myself somewhat saddened by the lack of player-friendly versions of the map (retouching the secret doors and numbers is a pain). Hence, my final verdict will clock in at 5 stars – both of the adventures warrant the fair asking price on their own, if you ask me.

You can get these fun modules here on OBS!