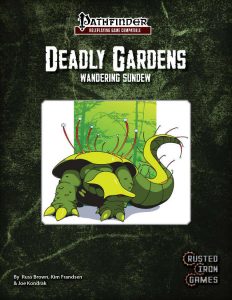 This installment of the Deadly Gardens-series clocks in at 5 pages, 1 page front cover, ½ a page SRD, leaving us with 3.5 pages of content, so let’s take a look!

Now as always, we begin the pdf with 2 new magic items, the first of which would be the blackthorn gloves allow the wielder, whenever they deliver a spell with a melee touch attack, to inflict +1d3 piercing damage, with a Reflex save to negate. For each point of damage caused by these thorns, the SR, if any, of the target is reduced by an equal amount versus the spell delivered. If the spell sports a save DC, it also increases by +1 per point of damage caused. Additionally, 2/day, the wielder can generate a 15-ft.-cone dealing 1d6 piercing damage, with a Ref-save to negate. The interesting component here would be that all targets affected by the cone are potentially targeted by the spell, replacing the usual touch delivery mechanism, but not the triggering condition for the item. It should be noted that this alternate delivery mechanism does not come with the SR/DC-modification. The spell thus delivered cannot be held and the item covers its bases to prevent Bouncing/Reach Spell abuse. AMAZING item. Looks simple, but is anything but simple and actually a complex, difficult rules-operation. The second item would be the sturdy walnut, which, upon command, can split into two halves, generating a masterwork buckler and a masterwork dwarven boulder helmet, but complete with straps etc. They may be enchanted as usual. Come on, that is a really awesome item that could come straight from fairy tales. Feels magical, love it.

The pdf also contains a total of 6 different natural items: The axe beak adrenal gland, when applied to a wound, doubles hit points gained via resting and nets a +1 dodge bonus to AC and Ref-saves after application. Lammasu claw powder can be used as a power component, increasing the radius of magic circle against evil. Criosphinx horn powder nets a +2 bonus to Cha-based skill checks against the opposite gender. The tentacles of the giant sea anemone allows for saves with a bonus to end ongoing pain effects. The trollhound heart nets brief fast healing and eating it provokes an AoO. Finally, the wandering sundew seedpod is cool. Why? Because it allows you to grow a wandering sundew companion! And yes, we get proper companion stats and proper rules-interaction, courtesy of the plant companion engines created by Rusted Iron Games. The companion is pretty potent, but considering the requires investment and story-requirements, I’m good with it.

Now, as for the star of the pdf, the monster. Wandering sundews are NOT creatures to be taken lightly. Yes, the cover makes them look nice, but they actually clock in at a massive CR 18! With gore, slam and tail attacks, they are pretty brutal melee beasts, particularly considering their Strength above 30 and the bonus acid damage their attacks cause. In spite of being Huge, these critters are actually really stealthy and they have a build that will make players think really hard before engaging: You see, the wandering sundew is a sundering specialist, with the acid bypassing hardness of metal and stone with sunder attempts. Beyond that, the creature has grasping stalks: At the end of the round, a melee touch attack is made against all creatures in reach, which then proceed to stick to the sundew, taking acid damage. A total of 4 creatures can be held thus and targets held as such do not penalize the capabilities of the sundew AND do not bestow the grappled condition on the sundew. OUCH!

Editing and formatting are very good on both a formal and rules-language level. Layout adheres to the 2-column full-color standard of the series and the artwork provided is nice, particularly considering the low price point. The pdf fully bookmarked, in spite of its brevity. Kudos!

Russ Brown, Joe Kondrak and Kim Frandsen deliver a really cool critter with ambitious, well-executed supplemental material. I have no complaints to field against this cool pdf, particularly considering the extremely fair, low price point. My final verdict will clock in at 5 stars + seal of approval. Cool critter!

You can get this cool critter for less than a buck here on OBS!