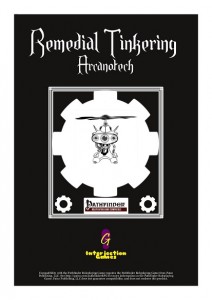 The latest Tinker-expansion clocks in at 6 pages, 1 page front cover, 1 page SRD, leaving us with 4 pages of content, so let’s take a look!

This expansion of the tinker base-class ties in with the superb Happy Little Automata and the Pimp my Alpha-expansion, though neither are required for the use of this one. Thematically, we have an interesting deviation from the feeling of the tinker – whereas, so far, the class has been pretty much designed as a science-y class regarding its abilities, we have the magical now suffuse the class – this is represented by the new arcanotech invention subtype. Since magic tends to make mechanics malfunction, only one such invention can be applied to a blueprint at a given time.

We begin this supplement after a recap of the invention subtypes with 4 innovations: Starting at 6th level, you may take the shielding innovation which adds Int-mod temporary hit points sans fixed duration whenever you deploy an automaton. Based on this, you can learn Alpha Shielding, which lets you realign these when deploying an automaton while the alpha is within the master’s presence ability. The Buffered Construction innovation breaks the “only one arcanotech invention”-cap and extends it to 2 per blueprint and Cybertech Arcanotech lets you choose two sorc/wiz cantrips, which you then can cast at will at full character level, with Int as governing attribute.

The latter can be further upgraded to grant access to two 1st level SPs from the sorc/wiz spell-list, which you then can cast 2/day each. A third innovation (also a greater one) grants 3 2nd level SPs that can be cast 1/day. Finally, a high-level greater innovation sets Alpha Int to 12 and makes you choose one school other than transmutation. The alpha learns to cast spells from this school and transmutation as though it were a 3rd level wizard, but CL can never be enhanced by any means.

All right, so what kind of inventions await us? Well, for example, Alphas may learn to activate 1st level and lower wands as directed standard actions. Regular automata can only learn 0-level wand use. Personally, I’m not a fan of flat-out ignoring 2 DR of any type and would have preferred scaling according to DR value, but considering damage output of physical automata attacks, I can live with it. It should be noted that the follow-up tricks allow for 5 and 10 DR to be ignored – the latter of which can be nasty versus creatures with DR/epic, since that DR usually isn’t that high.

VERY interesting: Autoexecution Script: This lets an automaton execute an offensive invention that requires a directed action as part of an attack directive…and yes, it can be installed multiple times, at increasing BPs.

The arcanotech delivery system is…EDIT: now properly balanced: Master Crouch has eliminated this exploit, which nets + 0.5 stars, as it eliminated the one balance-concern of this pdf.

On the plus-side, adding weapon enhancement bonuses and special abilities of +1 value is interesting. (Yes, upgrade to +2 available for both; upgrade to +3 available for the enhancement bonus.) There would also be basically a cantrip catapult for evocations that can sling up to one of two evocation cantrips when used in proper conjunction. A failsafe to mitigate kamikazes is sure useful at 0 BP – but it also takes a bit of the whacky planning aspect away. Personally, not a fan, but if you’re all for maximum control, well, then, I guess you’ll like it.

Now what really intrigued me would be lead paint – a paint invention that eats the first 5 points of spell damage. Here’s the deal, though: Regardless of damage type! Considering the combo-potential of paint, that’s pretty awesome! Also rather nice: A means for an automaton to 1/day grab a harmless, potion-base-spell out of the air and create a potion – and no, it can’t be sold, but yes, it can be upgraded for more daily uses.

Skill programming gets an upgrade as well, allowing for the use of the skill as though the automaton was a real boy. (i.e. as though it were a regular character) *Sniff* Okay, so notice an absence of the whacky so far? Well, there is a collection of these: The Toaster-Invention-tree! No, not gonna use the acronym here… The base invention allows the automaton, which now has a built-in toaster, to do the cooking if it has the skill and arms. With a follow-up invention, the toaster can go thermonuclear, inflicting bonus fire damage…and it has a synergy…with toaster of TERROR! 3/day, these automata can blast forth short-range cones of incendiary material that may light foes on fire. The aforementioned invention increases the damage output of the cone by +1d6. If that were not enough, the toaster of terror’s blasts can, at high levels, ignore resistance, increase the reach of the cone and render targets shaken as an added insult to the injury of being killed by a walking toaster.

Editing and formatting are top-notch, I noticed no glitches on either a formal or rules-language level. Layout adheres to Interjection Games’ no-frills printer-friendly two-column b/w-standard and the pdf is art-light. The pdf has no bookmarks, but needs none at this length.

So, I did honestly fear Bradley Crouch extending the complexity Moloch that is the tinker to the arcane sphere – but surprisingly, for the most part, the content herein is more than solid – the toaster builds are hilarious and tricky and the weapon-upgrades for automata have been long expected – so, on one side, I do love this pdf. While I’m not a fan of flat DR-ignoring, that’s not bad.  EDIT: The one balance-concern has been reined in. No more complaints.

That being said, the pdf does offer a plethora of imaginative and cool options otherwise – I can’t wait to see what combos my players come up with regarding lead paint, for example. My final verdict will hence clock in at 4.5 stars, EDIT: rounded now up due to the one balance-concern missing.

You can get this nice, if not perfect expansion here on OBS and here on d20pfsrd.com’s shop.