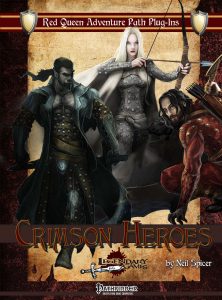 This collection of pregens for the classic Curse of the Crimson Throne AP clocks in at 34 pages, 1 page front cover, 1 page editorial, 2 pages of introduction, 1 page ToC, 1 page SRD, 1 page advertisement, 1 page back cover, leaving us with 26 pages of content, so let’s take a look!

All right, so first things first: The characters herein have been created with a 20-pt.-buy method, but for GMs and groups enjoying the added challenge, scaling notes for 15-pt.-buy characters can be found – nice! The presentation follows the by now tried and tested (and really nice) way of the pregen-books released by Legendary Games: We have a gorgeous full-color artwork for each of the characters, alongside a quote that represents the respective characters. It should also be noted that fold-up paper minis for all characters can be found herein.

Now, let’s take a look at the characters and start with Ardimaius Trente – and a brief glimpse at the character will tell you that this martial master and compassionate soldier has a built-in reason to engage in the AP; here, an addicted friend. These tie-ins double as a kind of trait, mind you – and this ties into the very modules of CotCT. So yes, the pdf provides deeply-immersed tie-ins of character and module, but it does not stop there: In the tradition of these pdfs, we also have ties between the characters – love-interests, rivalries and the like…and yes, we have notes on character advancement as well as roleplaying advice for the respective characters.

The Varisian rogue (rake) Eugeni Yozifari grew up on the streets – and at one point, he had an affair with another one of the pregens…and he barely managed to survive an encounter with a rather dastardly crimelord…and now has more than one axe to grind with the old sod…The Shoanti cleric of Pharasma (It should be noted that closed IP race-names have been slightly altered, but you still get what the respective ethnicities are) Istas Wraithscar is stricken by poverty and had an addiction to an exotic, strange drug at one point, the second death induced by the drug bringing her once again in line with the goddess…

Khostur Khyle, half-orc urban ranger, is a tragic one: He is almost human…and his wife was brutally murdered…and while he can’t yet retrieve the ring from a pawnshop, he has found out who was responsible for him being all alone. He will not be denied retrieving the wedding ring….or making his foe pay. Lianna Ieduri, a half Varisian, half Vudrani tattooed sorceress is a sorceress with a heart of gold – and as a reformed criminal, she knows something about module #1’s first BBEG’s operation…and btw., she does come with stats for her viper familiar!

Portia Cromathis can hear the spirits of the dead whispering to her – and thus she tries to honor dead and living alike, donning the identity of the Silversheen Ghost -the stalker specialization vigilante with her hauntingly beautiful artwork is most assuredly one of my favorites in the pdf…but then, no surprise there, right? ;P Oh, and she is looking for her missing nephew, once again providing a powerful motivator for adventuring, as well as some romance potential with a fellow pregen.

Runyar Locklin, dwarven warpriest of Abaddar, has a rather powerful motivator as well – the man wants to restore the honor of his family…and with a history of connections and a tendency to not be 100% truthful regarding item-value, he makes for a slightly mischievous twist on the trope of what you’d expect from an otherwise classic character/class combination. Finally, there would be Virsaner Tayne, a half-elven dropout of Korvosa’s academia, victim of a smear-campaign paid for by a rival student, executed by, bingo, the boss of module #1, the conjurer with his raven familiar makes for an unkempt, if kind being who represents more of a down-to-earth guy, when compared to the glamorous, slightly femme fatale-ish Lianna.

Editing and formatting are top-notch, I noticed no glitches. Layout adheres to a beautiful two-column full-color standard and the artworks for the pregens are really amazing. The pdf comes fully bookmarked for your convenience. Power-level wise and rules-wise, the pregens are all effective, on roughly the same power-level and they all manage to feel like organic characters.

Neil Spicer’s pregens are amazing: Not only are they interwoven along one another, they sport intriguing personalities and come with strong motivations to become involved with the plot of the CotCT-saga. The diverse ethnicities and personalities collected herein fit well within the context of Korvosa and render this collection a great purchase for groups who want to pick up the AP and just play. Add the scaling and roleplaying advice and we have a great file that leaves nothing to be desired. Hence, my final verdict will clock in at 5 stars + seal of approval.

You can also get a great bundle of LG’s cool pregen hereos here!
Endzeitgeist out.