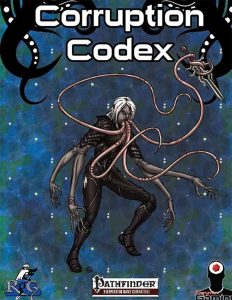 This pdf clocks in at 33 pages, 1 page front cover, 1 page editorial, 1 page introduction/ToC, 5 pages of SRD, 1 page advertisement, leaving us with 24 pages of content, so let’s take a look!

Okay, so if you’ve read my review of the Horror Adventures hardcore, you will have noted that I am slightly ambivalent regarding the corruption system taking away player control at high level; I also noted that this aspect could be eliminated from the respective corruptions with a minimum of fuss, making that a definite mechanical strength for tweaking the corruptions in question. Now, I will not hold it against this pdf that it mirrors the design-paradigm of the Horror Adventures corruptions, but I most assuredly will take note on whether the respective progressions remain as tweakable. Note that I do this for the sake of my own fancy, rather than as in a reviewer-capacity; it would not be fair to complain in an official context about a tweaking option that represents my private sensibilities, after all.

All right, so what types of corruptions do we get? Well, the first of these already is interesting, in that its very concept represents an anxiety that steeped fin-de-siècle aesthetics…and those that went before and after: The first corruption herein is the concept of Devolution, an evolutionary regression to a more instinct-driven state. The corruption does this with an ingenious way: It tallies a sentience score that is the sum of all mental ability scores. When engaging in a manner that is bestial or primal, you are tempted to take it and acting on such an impulse nets you a Will-save – on a failure, you roll 1d20 and lose that much sentience. Upon reaching 0 sentience, you advance a stage. It should be noted that the variety of Manifestations provided make perfect sense for the concept: Gaining alternate means of locomotion, an improved physiology and toughness or particularly potent skin. Scaling skill bonuses in physical endeavors and instinctual cunning can also be found among these. I really love this corruption, as it not only is iconic, its sentience mechanic’s replenishment allows for an exceedingly easy tweaking option to customize the corruption to your campaign’s needs. As a fearsome aside: Offspring sires while in the throes of the corruption actually shares the ability score reductions that progression in the corruption stages net you… Oh, and know what’s cool? We get a ML 9 sample character to highlight what you can do, mechanically, with the corruption. In fact, each of the corruptions featured within this pdf has a nice sample NPC!

The second corruption featured herein is one I consider rather creepy indeed: The Fungal corruption. It shares a theme with the subversion of one’s mental faculties, obviously, but it is completely distinct in the ways in which its stages are handled. Once again, this engine allows for pretty easy tweaking, with time being a major factor – and no, a simple remove disease (not italicized) won’t suffice. Those that have been infected with these horrid fungal matters can spawn horrid fungal caricatures of regular summoned creatures, draw sustenance from the earth or decaying matter and you may even exhibit a strange, fungal rot, enhanced senses, the ability to influence plants and the like. And yes, the sample artwork for the infected character is actually really creepy. And yep, poisonous spores and blood are part of the deal.

The Kaiju corruption takes a different stance – as you probably have gleaned by its name, it is one usually gained by being subjected to truly malevolent magic – and its effects are serious, tapping into Ultimate Charisma’s amazing antagonized condition: The poor victims can’t end it simply and treat all the world as the antagonizing target, with. once again, corruption stage advancement being tied to an easily modified mechanic that is based on damage inflicted while being enraged by it. Beyond rock catching and the like, the theme here obviously would be the transformation into a mindless, gigantic, rage-driven monstrosity that lashes out against the world – very cinematic, and yes, cool!

Poor beings that have fallen prey to the voidspawn corruption have been touched by one of the innumerable forces of malevolence in the cold void between the stars – and there is some sentience to this infection, this tarnishing of terrestrial flesh: The progression this time around focuses on using its powers (which you will want to…) as well as the discorporation generated by teleportation et al. – being torn up in molecules and reformed seems to facilitate the work of the vile corruption. Beyond the nightmares that haunt those touched by the void, the tendrils so aptly showcased on the cover, the summoning of things from the void. The gifts also feature vastly extended reach for these tendrils, warping space, which grants progressively better effects and begins with ignoring difficult terrain and also nets a touch attack that deals untyped damage and feeds you. I’m never a fan of untyped damage, but considering the nasty stain (when you’re touched, roll a Will-save or use it…your healers and support casters will love that…), I can see it work. Miss-chances due to non-Euclidean anomalies and all-around vision (which, alas, prevents you from closing your eyes versus gaze attacks…). Have I mentioned the option to gain bisected limbs (no, you won’t be doing 4-Weapon-Fighting)?

The pdf does feature more than these corruptions, though: We are introduced to a variety of interesting feat-options, with the (Corrupt)-feats building in unique ways on the influence of corruptions: E.g. taking Abandoned Heritage eliminates your original subtypes if it is not the same as the one tied potentially to a corruption: Humans would, e.g. no longer be affected by abilities specifically targeting them. Gaining bonuses, courtesy of the malevolent forces that have touched you. There also would by the Corrupted Style-feat-tree, which enhances a chosen weapon or natural attack, and which may cause Wisdom damage with follow-up feats…and worse, at the pinnacle of the tree, you may spread your corruption via your attacks…Additional limited-uses of corruption abilities can also be found and there are (Salvation)-feats, which work perfectly for the more heroic horror adventures and characters, who wish to keep their corruption at bay.

More than the significant array of content we have covered so far, the pdf also offers templates to represent the creatures touched by corruptions in the book – which brings me to another aspect: Pretty much every corruption herein could carry an adventure of its own. The pdf also sports a CR 6 voidspawn drone as well as notes on greater voidspawns. On the item side of things, we get a bane variant versus those corrupted and a weapon that can mend itself by damaging those tainted by the darkness…oh, and its wielder can gain temporary hit points, with a fitting maximum limit. The despoiling feaster rapier is particularly potent in the hands of a creature with a manifestation level, while a set of harnesses can act as helpful boosters for corruption manifestations. The diamond of corruption expulsion allows you to extract your corruption, Mr. Hyde-style, while specific masks that sport taboos offering protection. The pdf also sports the Dervish of Dawn and Leshy Warden archetypes and two feats as reference material for the proper use of the NPCs featured herein.

Alexander Augunas, N. Jolly and Isabelle Lee deliver big time in this cool supplement – the corruptions have unique angles, worthwhile gifts and twisted stains. The supplemental material is similarly qualitatively high and the items sport some cool angles as well. Each of the corruptions has the ability and potential to carry an adventure or series of modules and plentiful character concepts. The Kaiju corruption should find its fans even in the hardcore fantasy crowd that doesn’t like horror, while the devolution corruption just begs to be used in the context of pulp games. In short: This pdf is most assuredly useful and amazing beyond the confines of its thematic focus – and what more can you ask of such a book? I most certainly want more/a sequel! This is well worth 5 stars + seal of approval.

You can get this amazing tome here on OBS!
Endzeitgeist out.