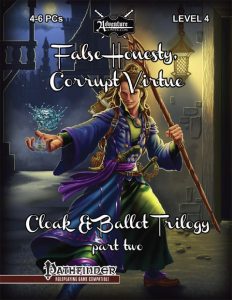 The second part of the Cloak and Ballot trilogy clocks in at 22 pages, 1 page front cover, 1 page editorial, 1 page SRD, 1 page back cover, leaving us with 18 pages of content, so let’s take a look!

It’s been a while, since we’ve been to the fair town of Rogail in the first installment “Tyranny of Greed“, so let’s recap, shall we? Obviously, this recap with contain SPOILERS. From here on out, potential players should jump to the conclusion.

All right, only GMs left? Great! The order of the unified voice, a quasi-democratic institution erected in the aftermath of a tyrant’s regime, allows the people of Rogail to elect their leadership. However, charismatic crimelord Willard Maypoll, has managed to secure the office and, ever since, began expanding his operations. The death of one Raul Teak resulted in Trina Heath hiring the PC to bring an end to his reign.

The issue for the PCs did lie in a) surviving the killers sent for them and b) uncovering issues and trying to outmaneuver Willard and his official apparatus. Alas, the mayor knows his game and tails the PCs, trying to deal with Trina and her help…but alas, next week is election, and now, Trina has nothing left to lose…she’ll run for mayor! This is where this module begins, and, as a brief timeline explains, it covers 5 days. After a brief background exposition, if required, the pdf begins with basically a verbal duel of Trina and Willard, one interrupted, however, by a terror golem entering the scene. After the panic, only an elven reporter called Lania Leafdancer, allowing smart PCs to make a potential ally out of the local media – an enemy they can use, for Trina is facing an uphill battle in the election!

Now, the elections themselves begin, with the second day providing an important lynchpin in the campaign – the trial of Blood Blade Grogh, with two sample articles being provided for your convenience…though it, at this point, does not look good for Trina. The 3rd day may potentially change that, for it is the annual Victory Day celebration, where the PCs can participate in a variety of check-based mini-games as well as defeat fireworks-wielding gremlins attempting to sabotage the ceremony. The local racial tensions that haunt the city flare up, incited via magic at the commencing trial, where the militia and half-orc populace is going to come to a bloody fight – one that, alongside its casualties can’t seem to be prevented. Some reward for particularly astute and capable player characters would have been in order…but Trina vanishes during the riot and her agenda becomes more apparent in part III.

Now, the aforementioned election rules are collated in an appendix and PCs who want to, can clear out the gremlins from Rogail’s sewers, with traps and the like looming in basically an optional mini-level that comes fully mapped for your convenience, including a player-friendly version of the map. Afore-mentioned articles are similarly collected for your convenience and to cut up and present to your players on one page.

Editing and formatting are very good, I noticed no significant glitches. Layout adheres to AAW Games’ elegant, beautiful 2-column full-color standard and the pdf comes fully bookmarked for your convenience.

Haakon Sullivan’s second part of the Cloak and Ballot trilogy is not a bad module – it is scripted to a high degree, with ample of read-aloud text and cut-scenes available for GMs less adept at improvising fluff text, so that’s a plus. On the downside, the module, ultimately, is much more simplistic than its awesome subject matter deserves. The idea of general elections, politics and the like in a fantasy module is damn exciting, but I really wished this actually capitalized on the premise. Instead, we get a couple of cut-scenes, combat challenges (admittedly, sufficiently interesting ones!) and a bunch of relatively simple mini-games…but is that all? I mean, come on – from sabotage to espionage to long-term strategies, with PCs handling negotiations etc., the subject matter has SO MUCH potential…and realizes none of it. Instead of allowing the PCs to walk the tightrope between conflicting groups of interest, unearthing issues etc., the module feels more like a quick sequence of relatively conservative challenges that falls, alas, short of the exceedingly awesome premise it is based on.

This is not bad, mind you – but the frame-work is so innovative, so cool, I really wished it had properly taken account on what it could easily be. This has the potential to be truly a one-of-a-kind experience and didn’t realize it. While certainly not bad, this module thus ended up being much less memorable than it imho could and should have been. It’s still a solid adventure and I hope the finale of the trilogy makes up for this one, but verdict-wise, I can’t go higher than 3.5 stars, rounded down to 3 for this one.

The superior first part can be found here on OBS!