Classes of the Lost Spheres: Paramour 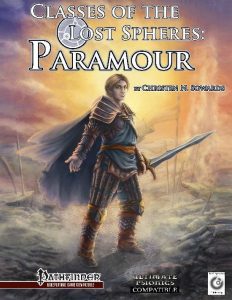 This installment of the Classes of the Lost Spheres-series clocks in at 18 pages, 1 page front cover,1 page editorial, 1 page ToC, 3 pages of SRD, 1 page back cover, leaving us with 11 pages of content, so let’s take a look!

This review was requested to be moved up in my reviewing queue at the request of my patreons.

All right, so, the paramour, chassis-wise, gets d8 HD, 4 + Int skills per level, proficiency with simple weapons and light armor, and if they have a Heartbound partner, they get a weapon proficiency of that character as well. They have ¾ BAB-progression, good Fort- and Will-saves, and add their Charisma bonus to AC while in light or no armor and unencumbered, which increases by +1 at 3rd level, and every 6 levels thereafter, for a total maximum of +3.

Wait, heartbound? Well, yeah, this class is all about the power of love, and as such further builds on Transcendent 10: Heartbound feats. As a brief recap: Heartbound feats require that both partners have a Heartbound feat to work…but they don’t have to have the SAME feat, which makes them more flexible than, say, teamwork feats. Speaking of which: At first level, the paramour selects a heartbound, teamwork or combat feat as a bonus feat, with an additional feat gained at 5th level and every 5 levels thereafter. Teamwork feats must be shared by the partner, though they may be retrained as Forlorn feats (see Transcendent 10: Forlorn Feats).

The unique component of the class engine here would be “Tides of Passion”, which builds on the new “Ardent” condition – this condition is triggered upon seeing the Heartbound partner take damage, gain a negative condition, or by dropping beneath 50% of your maximum hp. This condition is exclusive to beings with Heartbound feats or paramour levels, and grants a +1 morale bonus to saving throws “or -2 versus mind-affecting emotion effects” – pretty sure that this should either read “or a +2 morale bonus…” or “and a -2 penalty…” Which of these is correct, though? I can’t say. Being ardent for more than Constitution modifier + paramour levels leaves a character fatigued. This is problematic on several levels. For one, the condition is not actively triggered by a character – RAW it just happens. This potentially can lock out e.g. Heartbound barbarians out of their rage…which, come to think of it, kinda makes sense on a narrative level, guess I finally know why Conan took so long to settle down. However, on a mechanical perspective, being locked out of your class feature due to fatigue is not fun. Additionally, the condition specifies no terms by which you can dismiss/end it – so, if you’re stuck in a really long battle, you’re screwed, particularly since the fatigue incurred has no rage caveat – it has no duration, which makes it default to “until rested”; again, very problematic.

Anyhow, tides of passion grants you a 1d4 pool, which increases by +1d4 at 3rd level and every 3 levels thereafter. When you get the ardent condition, you roll your dice, and commit the result as a free action. At first level, these may be committed as temporary hit points. Complaint here: As temporary hit points, they should have a caveat that prevents their redistribution to avoid abuse via triggering of negative condition-ardent and infinite hit point redistribution.

Starting at 2nd level, and ever even level thereafter, the paramour receives a so-called expression. Multiple expression benefits from multiple paramours don’t stack, and expressions that interact with psionics temporarily grant the psionic subtype. 17 expressions are provided. There is a means to add fire damage to melee or ranged attacks – and if you lose your love and become Forlorn, this instead works via cold. Channel heartfire lets you fire the committed points as rays, with the bonus to atk increasing the longer the expression is maintained. This should have a maximum caveat. On the other hand, I really liked the means that lets you apply the dice result as a shield bonus to your adjacent partner. There also is Heart’s Magic, which lets you choose one spellcasting class and spell. You can expend 2 points from your tides of passion per spell level to gain the ability to cast it as a spell-like ability, using your paramour class level as caster level. Each time you use this to create the same spell effect, you increase the cost by 1, and the spell can’t exceed in spell level the number of dice in your tides of passion pool. The ability can’t duplicate expensive material components. Minor nitpick (and I mean minor) – its reference to the same exhausted effect might be considered to be a bit subtle. While both are not perfect, I certainly respect how their engines operate, and frankly, enjoyed them both for their complex operations. The psionic version here is different, instead granting you Wild Talent and a power from a chosen class, with a surge-lite enervation as a downside.

Heart’s resolve acts as Iron Will for purposes of prerequisites, and lets you apply the tides of passion dice as a morale bonus to Will saves; alternatively, you can apply the dice as a bonus to damage with atk, SU, powers and spells versus the target that triggered ardent. Inspiring cry takes a swift action to activate, and allows you to outsource your tides of passion, heart’s redoubt or one expression benefits to an ally in close range, losing the benefits during that time, with lingering effects lingering on the ally instead of you. Another expression nets you a teamwork, with the heartbound partner counting as having it; with inspiring cry, you can make the partner actually have it as a swift action – okay, for how long? No duration is stated. We also have the option to gain an Intelligence-, Dexterity-, Charisma- or Strength-based skill as a class skill, to which the dice may apply. Another expression lets you use tides of passion dice as sneak attack dice for the purpose of prerequisites. Okay. Another expression lets you have a true friend, and you get Heartbound benefits for this fellow. Another expression allows you to commit two points from the pool to add a +1 morale bonus to attack rolls for 1 round. This one suffers from not getting the bonus type verbiage right – only the highest level morale bonus applies, and in the absence of a direct stacking with itself caveat, this does not work as intended.

Heartbound is gained at 3rd level (and the ability name is a bit unfortunately chosen); it also does not state at which level it is gained in the text, requiring defaulting to the class table. The ability nets you btw. a ranger’s Track or an at-will status for the heartbound partner. At 7th level, we have 1/day overflowing, allowing you to use a single swift action to commit tides points to temporary hit points and activate up to two expressions, gaining an additional use every 6 levels thereafter.

9th level nets the aforementioned lingering passion ability, which extends the duration of expressions and the temporary hit points by one round (two rounds at 17th level), which is odd in conjunction with spells, abilities and powers with a duration greater than a round – are these supposed to last only for a round? If not, is their duration increased by a round? This is odd. Starting at 10th level, 12 so-called greater expressions may be selected, including untyped damage boosts (*sigh*), temporary boosts to Wisdom, Intelligence, Dexterity or Constitution, granting the heartbound partner Wild Talent’s power points…yay? The power is RAW not included, and at 10th+ level, the scant few power points won’t cut it. These also include an upgrade for the atk-boost, better shield bonus granting, and a means to prevent the expenditure of spells/powers. There also is a Whirlwind Attack variant and more teamwork sharing.

There are three capstones provided, which include additional benefits, redirecting effects to you, away from your partner, and upgrades for magic.

The class comes with the narcissist archetype, basically a partner-less paramour with slightly better defenses and three unique expressions (regular, 10th level greater, capstone). It’s a decent system tweak, but not exciting. The pdf contains 20 Heartbound feats, and their balance is unfortunately as wonky as I feared. While in psychic or telepathic contact with your partner, and the fellow gets psionic focus, you can “roll to achieve psionic focus.” In Pathfinder, you don’t roll to gain your psionic focus. Even if the details in the verbiage worked, though, this’d be broken, as it can be used to bypass one of the most crucial balancing components of the psionics engine; at the very least, this should be level 15+. What about free heightening/extending of spells etc. whenever your partner targets you? On the other hand, we have the option to select a single spell from the partner for the tides of passion-granted spellcasting. Filial Devotion allows you to treat an ally as being heartbound to you. I did like the synergy with the Echo-class that one yielded. Being able to cast personal effects on the partner is super strong for multiclass characters (since the feat does not limit the ability to the paramour’s lite-spellcasting)…you get the idea. Puzzling: There is a rage-sharing feat that seems to have overlooked how the ardent condition and rage don’t work with each other. Beyond these heartbound feats, we have also 3 class feats that allow for split expressions, gain an extra expression – you get the idea.

The final page is devoted to a huge list of favored class options, which include exotic races like the darakhul, the psionic races, noral, vishkanyas, etc. Some entries here labor under the misconception of there being a thing such as “holy” damage – there is not. Other than such snafus, these generally did tend to be solid.

Editing and formatting are okay on a formal level; on a rules-language level, the supplement gets high-complexity operations right and bungles the basics, going so far as to undermining the basic foundation of the class’s engine. Layout adheres to a two-column full-color standard with nice, original full-color artworks. The pdf comes fully bookmarked with extensive, nested bookmarks, making navigation comfortable.

This is an early work by Christen N. Sowards, and it unfortunately shows; where the echo class was rough around the edges, but functional, the paramour’s issues at the very core of its per se interesting engine hamper its functionality. Additionally, its individual options, be they expressions or feats, are simply not balanced well. And that is a genuine pity, for I really ADORE the theme of the devoted partner; I think we need more of that in gaming. And the bits of genuine talent and smart components? They are here. This class is far from unsalvageable, but it will require a serious design addendum to work as intended. All in all, I can’t recommend this class, unless you’re willing to invest your time balancing and streamlining the content. My final verdict can’t exceed 2 stars.

You can get this unfortunately flawed, but thematically interesting class here on OBS.

You can get the bundle with the Heartbound feats here!

The Forlorn feats-file can be found here!