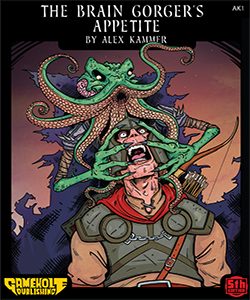 This module clocks in at 40 pages, 1 page SRD, 1 page blank, 1 page blank, leaving us with 37 pages of content. Not included in this page-count would be the two full-color maps on the inside of front and back cover and the front/back cover.

This review was moved up in my review-queue due to me receiving the print copy of this module in exchange for a fair and unbiased review. Additionally, it should be noted that my review is based on the print copy exclusively.

All right, still here? Great! This module takes place in the town of Ockney’s Hold. The place’s moderate wealth derives from the export of azurite over the meandering Oriana River. The local baron, one Oliver Reinson, has recently, quite weirdly, changed his behavior. His interests are changed, the chamberlain has taken a more proactive role and the former captain of the town’s guard has been replaced by a half-orc with a nasty temper, one Drast Grimbank. This has significantly changed the atmosphere of the town…and High Steward Braxton Tavaras has determined that something is SERIOUSLY going wrong in town…which is why he meets the PCs in a dingy tavern…though it should be noted that town and tavern-establishing shots/background information are provided with extensive read-aloud text for your convenience…and briefing itself has a lot of interesting components in details – perceptive PCs may, for example, note a pin on Tavaras’ sleeves that denotes him as a member of a cadre of beings devoted to the ideals of good government – a kind of benevolent kingmakers/maesters, if you will. The whole module has these small tidbits that make the scenes feel more alive, those little informational nuggets that make it feel pretty organic.

Anyway, Tavaras’ task is that the PCs are NOT to engage the baron, but should definitely find out what is amiss. We begin thus with an interesting premise: Thanks to Tavaras’ connections and recommendations, the PCs enter the service of the Baron. It is here I can comment on the cartography of the module; apart from the aforementioned full-color maps in the front/back-cover, the internal maps are b/w pencil-drawings and there are a lot o them. The tavern? Mapped. Mansions? Mapped. In the latter case, the map is very detailed and actually makes for a nice handout, in spite of being keyed. In the former, a secret door’s included, which means that you’ll have to draw a player-friendly iteration. So no, alas, no player-friendly iterations.

Where was I? Oh yes, the PCs are by now in the service of the baron, giving them an inside look of the baroness Helda not being too excited about the change of personality the baron has been exhibiting. The keep is not mapped, but that is due to the relatively brief stay here – you see, the PCs will pretty soon have a chance to save the baroness in the middle of the night from a mimic, of all creatures, that has made its way somehow into the keep. Perceptive PCs receive a direct hint regarding means of egress to the baroness’ chambers that may put them on track for the next sequence of the investigation, but smart players are not necessarily reliant on this – the similarly changed Chamberlain Brice would be the next suspect – brusque and uncooperative, shadowing the chamberlain may put them, after some legwork, on trail towards a refinery aptly named the Brick, where the PCs can listen in on both chamberlain and owner of the refinery – and it seems like they have a conspiracy afoot, as a nebulous mastermind is mentioned…of course, they may well be caught and have a fight up their hands, having to deal with the unpleasant master of the refinery…who btw. has his own unique ability to set him apart.

It should definitely be clear after that, that investigating the Brice Manor would be the next step – and btw., the garden is anything but safe, containing several carnivorous plants from 5th Edition Foes, reprinted herein for your convenience. The inside of the manor has btw. a response team of capable individuals, one led by Thaldar, a VERY powerful adversary…and the chamberlain does react with appropriate indignation to the invasion of his home. Here’s the thing, though: Smart PCs will want to interrogate the folks…and thus deduce that the captured chamberlain has been replaced by a doppelganger…who, true to convention, when caught, can spill some serious beans.

It seems like a nasty syndicate known as the Ceaseless has driven its claws into the town – you see, the aforementioned primary export of the region, azurite, actually acts like a drug to creatures of certain…anatomies. Namely brain-gorgers, which are basically illithids stripped of closed IP. Yeah. OUCH. Now the ceaseless may have underestimated the impact of addiction to azurite by putting just such an individual in charge of the operation, which is directly a reason the otherwise pretty subtle operation became noticeable, thus drawing in the PCs. In order to save the baron and the town and break the brain-gorger’s hold on the baron, the PCs will have to make their way towards the copper mines, provided they manage to survive the response-team sent to deal with them…

The 3-day journey through the wilderness has, just fyi, keyed encounters for each day and interesting things that happen, so yeah – more than a sequence of simple encounters….and then, the PCs will have to navigate the mines and finally deal with the brain-gorger. Wait. At what level? 1 -3? Well, yeah, but guess what – thanks to the addition of said villain, the PCs actually have a fighting chance.

Beyond stats for all monsters employed, the module closes with a nice 2-page gazetteer of the town.

Editing and formatting are very good. I noticed no grievous glitches in formal or rules-language departments. Layout adheres to a crisp two-column b/w-standard and the pdf’s b/w-art is nice, as is the cartography. The cartography may not provide player-friendly iterations, but generally is high-quality. The printed softcover comes with glossy cover, thick, nice paper and is generally well-made and doesn’t feel cheap – so yeah, if in doubt, I’d recommend print.

This is, to my knowledge the freshman offering of Gamehole Publishing and author Alex Kammer and it hits all my sweet spots. Its descriptive text if evocative. It assumes competent and smart players. It has pointers for GMs for the dialogues; it sports a variety of thematically diverse creatures…and it’s not a module that hands you victory on a silver platter. In fact, I consider this to be delightfully old-school. If your players don’t act smart, they’ll DIE. Horribly. The bosses herein are BRUTAL. The module offers investigation, combat, dungeon- and wilderness-exploration and a captivating, fast-paced plot/unearthing of a conspiracy. In short: This very much reads how I tend to design adventures for my own campaign. Including the challenge it poses. If you’re a pampered player who is not used to modules being actually hard to succeed, then this may come as a shock…but victory is EXTREMELY gratifying. You can pretty much play this as dark fantasy, as high fantasy or anything in between – whether it’s Oerth, the Forgotten Realms, Golarion or another world, the module will fit in.

Theme-wise, it makes a perfect fit for the Borderlands Region of Frog God Games Lost Lands or, with an emphasis on more horror and a slight reskin of some humanoids, a great fit for Ravenloft. Why? Because its design-aesthetic is so damn beautiful. I know, I know. Call me hypocrite, but most commercial modules for the big systems (exceptions do exist by the spades, mind you) feel a bit too easy for me. I’ve always been a GM and player who WANTS challenge. I want my choices to matter and make a difference and I want character death to be a possible component of the game. It is here. Now, at the same time, we actually did not lose a character playing this one. By a hair’s breadth. But no, this is not, I repeat, this is NOT a meat-grinder. It is not a nega-dungeon either. It is just a thoroughly well-crafted little gem that pits the PCs against brutal odds and a powerful opposition, but has ample in-game rationale why they can triumph.

My one relevant point of criticism pertains the lack of player-friendly versions of the maps, you know, sans key and secret doors etc. That being said, this is one of the most impressive first books I’ve seen a publisher and author produce in quite some time, and I do have a policy of cutting such first offerings at least a bit of slack. So, while usually the lack of player-maps would cost this my seal of approval, for once, I will retain it here. My final verdict will clock in at 5 stars + seal of approval and as far as I’m concerned, I’m stoked to see the sequel module hinted in the aftermath of this one.

As per the writing of this review, you can exclusively purchase this cool module here on Frog God Games’ store!
Endzeitgeist out.