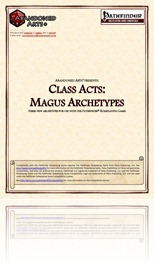 This pdf from Abandoned Arts is 4 pages long, 1 page front cover, 1 page SRD, leaving 2 pages of content for 3 new archetypes for the Magus, so let’s check them out!

The first new archetype is the arcane dreadnought, who does not incur a spell failure chance when using a shield and may imbue select powers from his/her arcane pool to temporarily enhance their shields with magical bonuses and even special qualities. Arcane dreadnoughts also get medium and heavy armour proficiencies earlier at the expense of bonus feats and also armour training, making this essentially a shield-based magus with enhanced defence capabilities.

The second archetype is the Magelance, a magus specializing in mounted combat who can use his arcane pool through his lance with ease, but at the expense of other weapons, which take double the amount of necessary points. Magelances must spend 1 point of his/her pool to use spellstrike with non-lance weapons. However, Magelances gain a phantasmal steed that counts as a construct and is based on the druid’s animal companion using magus levels -4 as a basis. Interesting archetype, especially to portray a mystic knight or in war-themed campaigns. Neat!

The final archetype is the Magus Mysterion, who adds Bluff and Disguise to the list of class skills, learns additional illusion-spells which he may add to his spell-list- Also his deceitfulness allows the Mysterion to enhance his powers against creatures fooled by disguises and craft an illusionary, rather powerful armour, which however, can be disbelieved. All of these powers, though, come at a reduced arcane pool. Again, neat, especially since just slapping rogue talents on a magus would have been the easier road.

Editing and formatting is very good, I didn’t notice any significant glitches. Layout adheres to Abandoned Arts’ 2-column no-frills standard and the pdf has no bookmarks, but needs none at this length. The three archetypes herein are all rather specific in their focus and were it once gripe I have with this pdf, then that’s it: Why can’t e.g. Magelances not choose one type of mounted weapon? Cavalry hammers? Etc.? I get the intention and I like the execution, but as written, the restriction to lances only feels unnecessary to me. The Mysterion is a cool trickster-magus, reminiscent of a certain bowl-helmeted Spiderman villain and the dreadnought is nice for shield-bash aficionados. Mechanically, there’s not much to complain here, though I do have one gripe – the fact that this pdf just ultimately failed to blow me out of the water like e.g. Class Acts: Monk Archetypes did – perhaps if the Mysterion had some more space and additional signature abilities, it would be even more awesome – the same goes for the other two archetypes. A bit more space would have helped these. Thus, I’ll settle for a final verdict of 4 stars.