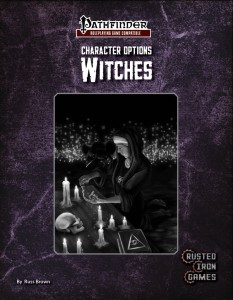 We begin this little pdf of witch-options with new witch patrons, 10 to be precise, though you quickly realize that the respective patrons differ from what you’d expect in a witch’s patron – or at least, did so for me. This is particularly apparent in 4 patrons, the Celestial, Fiend, Chaotic and Orderly patrons – in case you’re not immediately aware of that by the names, they represent one extreme of the two alignment axes, smething that, flavor-wise, was up until now rather the providence of sorcerors, wizards and divine casters. On a plus-side, the respective patrons can be considered to be rather well-crafted, with a fitting spell-dispersal for the respective levels, though personally, I couldn’t shake the feeling of them being “un-witchy” – then again, that’s my own issue and will not feature in the verdict of this book. Beyond these two, there are two more that fall into such a general theme: Nature and Divine. Where nature provides basically a druid-y patron spell list, the Divine patron actually is a deity and thus provides Domain spells – both being interesting concepts that actually make sense in a lot of ways. While personally, I’m not a fan of the draconic patron, I know that some of you will like it – ultimately, it’s, again, a personal preference and not something I’d fault the pdf for. On the plus-side, there are a couple of patrons I really liked: Beauty and Sin in particular feel very witch-themed to me and have a solid array of fitting spells at their disposal.

The pdf then goes on to provide 1 exclusive patron hex for each of the new patrons provided herein. Aberrant witches may cause a nauseating touch (at level 10+ with an accelerated slimy doom) to annoy their foes. The Beauty patron has a concept-wise cool hex: A fascination-causing gaze attacks, which can be used for level minutes (which is frankly, rather long) that can be activated as a swift action (though the wording here is a bit rough). At higher levels, the witch can utilize suggestion and mass-suggestion in conjunction with this ability, but alas, the hex does not specify the type of action both are, nor their CL – imho, these should be SPs, not the base SU of the ability. Celestial and Fiendish are mirror images of one another and grant scaling DR and bonus damage versus outsiders of the opposing alignment to the creature touched, lasting for 3+Int-mod rounds, usable 1/day per creature. Similarly, nature provides a touch that temporarily grants natural AC and fast healing to the target.

The orderly patron’s hex is pretty overpowered, allowing a witch to eliminate an increasing array of negative conditions at touch – sans limits. One level 8 witch alone could, as written, end a pandemic since she could just touch all afflicted, ending diseases before they even start. This needs a daily cap. On the plus-side, chaotic is no mirror of orderly and instead conjures forth a spectral tentacle that auto-grapples foes in close range, later also constricting. While generally rather solid in craftsmanship, this is basically the “you lose”-button for nearby spellcasters – auto-grapple is nasty…so why not go for a scaling CMB akin to black tentacles instead? The Divine patron hex has an issue – it conjures forth a spectral weapon with scaling damage that strikes a target within 60 ft., but it does not specify whether the witch needs to direct the weapon or not – I assume she does not have to expend actions to direct the weapon, but I’m not sure since there are precedence-cases for either. Draconic nets darkvision with scaling range and later blindsense, though the latter has a daily cap…and lacks an activation action that distinguishes it from always on darkvision. The Sin patron’s hex makes it possible to nauseate and render targets shaken- nice, though the logic behind SIn patrons causing remorse is a bit strange.

The pdf also provides 3 new archetypes, the first of which would be the devoted witch, who receives a modified skill-list and must choose the divine patron. Additionally, she gets the first and second domain power instead of hexes at 2,d and 8th level. The Green Witch must choose a nature-themed patron (or a divine patron with a nature-themed domain) and gain woodland stride at second level instead of a hex. Similarly, at 6th level, she gains a wild shape-like ability that scales and replaces the hexes gained at 6th, 10th and 14th level. The final archetype, the storyteller, once again receives a modified skill-list and uses Charisma instead of Intelligence as the key-attribute for class abilities and spellcasting, though, oddly, she still has to prepare spells in advance. Instead of the hexes gained at 2nd, 8th and 16th level, the witch receives limited bardic performances and 4th level and higher storytellers add the bard spell-list to their arsenals at the cost of but one hex – which seems a bit lenient.

Editing and formatting are very good on a formal level. On a rules-level, there are some wordings herein that feel a bit cumbersome and clunky, though barring minor issues, the content is functional. Layout adheres to a two-column full-color standard and the pdf sports a damn nice piece of artwork. The pdf comes fully bookmarked for your convenience, which is neat.

Russ Brown’s witch-options proved harder for me to review than anticipated. Why? Because I have pretty specific ideas about the witch-class. You see, I think of the witch as the scalpel to the sorc/wiz’s hammer – the subtle caster, the rebel with the uncommon themes. This pdf makes many more streamlined themes (cleric/druid-stuff, for example), work for the witch – so, as a reviewer, I had to swallow my own preferences and try to judge this book on its own merits. Now the respective hexes may not be precisely my cup of coffee, but for the most part, they are solid – though some can use minor clarification/whacks with the nerf-bat. Similarly, the archetypes, while crafted solidly, will not particularly rock your world – they adhere very much to the “exchange class ability x of class 1 with y of class 2”-scheme and do so in a pretty solid manner – though one that e.g. does not provide patron/domain-specific benefits.

Even when separated from personal taste, though, this pdf does have some flaws that weigh rather heavily…but also some neat options I thoroughly enjoyed. How to rate this, then? Well, the issues can’t be ignored, but the low price makes me round up from a final verdict of 2.5 stars for a solid mixed bag with some flaws.