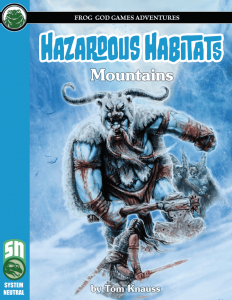 This installment in the Hazardous Habitats-series clocks in at 50 pages, 1 page front cover, 1 page editorial, 1 page ToC, leaving us with 47 pages of content, so let’s take a look!

Tis review was moved up in my reviewing queue as a prioritized review at the request of my patreon supporters.

So, what is this? Well, you know the spiel by now: This is essentially the adaptation of the terrain rules presented first in the terrain-centric hardcovers Frog God Games released for Pathfinder. These books provided such rules alongside a couple of magic items, spells, etc., and several adventures. The Hazardous Habitats books, in contrast, focus on what I considered to be the “stars” of these hardcovers, namely the respective terrains and how to make them relevant and exciting for your gaming needs.

As such, this book kicks off by presenting general considerations regarding the region per se, and then takes a closer look at the details. In this instance, we learn about the general biomes that can be found within the area commonly dubbed as “mountain”, as well as some considerations for the respective application. To give you an example: We get information about volcanic mountains and a supplemental table that lets us determine the presence of snow, ice, gravel, undergrowth, grass etc. in boreal climates, with likelihood of being there governed by altitude. Tables are presented for active and dormant volcanoes (nice!), and we get separate sections on those aspects in temperate and warm climates. Stratovolcano height and slope, shield volcano , cinder cone height and slope…call me a super-nerd, but I really LIKE this.

Even if you know about the differences between climates and volcano types, said knowledge is probably not at the top of your list of considerations when designing a mountainous region, when it very well can provide a crucial and plausible framework for your designs. A d20 table of events/random encounters is also provided.

After that, we get another helpful aspect of this series with regards to the planning of adventures and/or world-building – population effects on demographics. This table modifies the population by terrain type, and is followed with a custom table to determine the racial makeup of the respective settlement/region, which affects the next table, where demographics diversity affects the humanoid attitudes – which you roll on a table, with the proper modifiers added. Add to that political system and lifestyle table, and we have a quick and pretty smooth generator to elaborate upon. If that doesn’t suffice, we have 10 events and adventure ideas following this aspect, all of which tend to be on the longer side of things.

Beyond volcanoes, we also cover folded mountains and block mountains; both of these massive sections come with their own custom tables that allow you to generate sites and cohesive systems akin to what I described for volcanoes.

Beyond these, we talk about the importance of water, the rigors of mountain travel, the importance of passes and more; the latter deserves special mention: We get means to determine the percentile chances of a gap, the chances for the presence of a settlement (and a table to determine its type, and an expansive discussion on making a pass, a bridge generator, etc. – and the latter aspects are awesome. Why? Think about it: How many modules do you know that tackle the like? Braving a fantastic form of nature is a rarely tread ground for RPGs, and this gives you the basic tools to handle this.

Modes of travel, including yaks, llamas, and more common creatures, are discussed alongside walking and skiing as modes of traversal. So yeah, I’m a pretty big fan of this section.

As you know by now, I am somewhat less enthused by the hazard section of these books, which is ironic, considering that I usually tend to love these. Why is that? Well, first of all, the system agnostic take of these books means that we don’t actually get concrete rules for the respective hazards; enough to contextualize them in the respective system used, sure, but it still feels inconvenient to me. The common baseline assumed seems to roughly be based on 5e – Avalanches can be detected with an “easy Wisdom ability or skill check”; identification is a “Moderate Intelligence ability or skill check”; Avoidance is a “Hard Dexterity-based saving throw partially”, and we get escape strategies “Fleeing the are”, dimensions, a rough category for the effects (here: Deadly), damage types noted (cold, bludgeoning), conditions caused noted (pinned, restrained), complications and cures, remedies.

While I am not a fan of this system agnostic approach, I do think it works pretty well for terrestrial hazards like avalanches, icefall, crevasses and the like, so that’s good news for this book. Much to my pleasant surprise, oxygen deprivation comes with different iterations depending on height, and the versions note whether acclimation is possible or not. Similarly, these interact with High-Altitude Cerebral and Pulmonary Edema. These do a much better job at standing out and working in the system agnostic context than diseases and poisons in previous iterations of the series. Why? Because they describe properly what they do. We learn *how* these manifest and behave, can extrapolate the material for our games and for within the context of our game world. From lava to pyroclastic flows to rockslides, we also get quite an array of cool additional hazards here.

The few plants here (poison ivy, wolf’s bane, mountain laurel/rhododendron), alas, suffer partially from the same issue as previous poisons in the series – they do not exactly focus as much on treatment within the game world, with roleplaying; they do, however, properly describe how they work and affect the target, so while I’d have loved to see a stronger focus on roleplaying solutions here, this fares better than I expected. Mountainous inhabitants includes, among other things, ticks that transmit diseases, including a list, but unfortunately, none of the diseases are really described regarding what they do, their symptoms, means of curing the effects, etc. In short, we gain neither the tools for a given RPG system (just their approximation), nor the roleplaying game information for them. The pdf then proceeds to discuss humanoids and creatures in the terrain, alongside a pretty significant table for random encounters.

As in the previous installments of the series, the final section of the book deals with weather, with tables by season and height, chances of precipitation per 6 hours; adjustments of windspeed in MPH depending on attitude – per se cool, though the section this time around is a bit smaller. I do like that, though, as the values provided are only in °F (which mean nothing to most people not from a country with imperial measurements); getting degrees Celsius values as well would have been nice. Similarly, alternate windspeeds by kmh would be nice.

Both lightning and fog are provided here as hazards, and so are snow blindness/sunburn/etc.

Conclusion:
Editing and formatting are very good on a formal level. Layout adheres to a pretty printer-friendly two-column standard, with subtle blue that comes out as grey in b/w; the artworks used are really nice photographs, and the pdf comes with full bookmarks for your convenience.

Tom Knauss’ Hazardous Habitats-book on mountains may be the strongest of the ones I covered so far; not necessarily because the others were not good, mind you, but because the terrain this time around lends itself to aspects that simply work better within the self-imposed limitations of this system agnostic approach. It shares the same convenience issues for non-Americans/those not sued to the imperial systems of measurement (particularly °F – for me as a person, this bothered me enough to make me round down as a private person; it literally decreased my chances of using this book), but the terrestrial hazards this time around work better, as they are more focused on providing details; that being said, how e.g. disease-carrying ticks are handled still remains an inconvenience.

When all is said and done, I think this works better in the system agnostic frame than the installment on grasslands; it’s not as convenient as it could be, but it’s a book that’s worth getting if you want a toolkit that’s helpful when designing mountainous regions. As such, my final verdict will clock in at 4.5 stars, rounded up.

While this sued to be available on OBS, it had, oddly, been taken down from the site (alongside a few other Frog God Games books); you can still get this pdf here on the frog’s store, though.

If you consider my reviews to be useful, consider leaving a tip, or joining my patreon. Thank you.