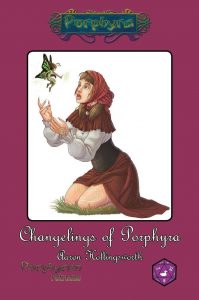 This installment of the player-centric „…of Porphyra“-series clocks in at 23 pages, 1 page front cover, 2 pages of SRD, leaving us with 20 pages of content, laid out in 6’’ by 9’’ (A5), which means you can fit up to 4 pages on a given sheet of paper when printing this.

Really nice: This supplement is framed by a short story, namely “The Pink Flowers of Saint Zenobie”, previously released in a collection of stories the author penned alongside Cassandra Lee Hollingsworth. The story uses the implied Averoigne-setting and does so with permission. Thanks to the patchwork nature of Porphyra, though, that should provide no problems. The story is a nice reading experience and contextualizes the changelings of the patchwork planet rather well.

Now, here is a huge thing that differentiates the changelings of Porphyra from other worlds: We take a step away from the fey-angle. To quote the supplement: “As infants these beings are abducted, adopted, abandoned, sold, and/or traded, and then changed by magic to resemble a member of a different people.” This, of course, can provide ample fuel for nature vs. nurture storylines, for angles on self-determination of one’s race, gender, etc. and, as a whole, adds a rich variety of narrative options to the fray. So yeah, that small change, while perhaps something that most folks would not even notice, is pretty important to me and enhances the narrative angles available for both players and GMs.

Rules-wise, the chassis of Porphyran changelings is pretty much identical to the base changeling, though, and this is a plus, there are actually aspects that are MORE precise herein: The changelings’ claws, for example, get properly codified damage-types, requiring no defaulting to standards. Kudos for not just cut-copy-pasting here. Indeed, the changelings as presented here arguably make for better representatives of their expanded trope than the vanilla race. Porphyra changelings receive the racial emulation feature: You choose two races: the changeling looks like one humanoid race, but is, in fact a member of the other race chosen. This nature may be noticed by those well-versed in Knowledge (nature). The second racial trait unique to Porphyran changelings pertains the varied nature of the race as well: Upon character creation, changelings get 2 RP that are not assigned. These may be used to customize the race with standard traits taken from Defense, Feats and Skills, Magic, Movement, Offense, Senses and Other categories. While I have complained time and again about the exceedingly flawed nature of the RP-guidelines as presented in the ARG, I consider this limited form of customization actually an improvement over the alternate racial traits provided for the non-Porphyran variant of the race. It may be a flawed foundation to build upon, but the heritage/upbringing dichotomy should provide ample guidelines here.

The pdf proceeds to explain in details the diverse takes on adventuring, roles in society and ecologies of changelings and also sports sample names, age, height and weight tables and even non-gendered names. Since Porphyran changelings obviously have a much broader focus, this makes sense and further emphasizes this interesting and cool thematic expansion of the concept. The pdf also includes a total of 5 different race traits, one of which is missing a bonus type; the others are precise and interesting, providing for example a bonus to Concentration checks made to maintain spells with psychic components. Nice. The pdf does sport 5 different alternate racial traits, which includes damage type change for the claws, turning them into slams, being fey-descended, replacing claws with skill boosts or darkvision with a boost to saves versus illusions. I have no complaints here, and bonus types as well as powers of exchanged tricks are generally in line. The race, as a whole, can be very strong in the hands of a capable player, but it doesn’t have to be; the wide open nature is kept in line by the limited RP-wild card array, and the requirements regarding narrative consistency.

The pdf also includes a couple of class options, the first of which would be the Malcontent arcane trickster, based on the Prestige Archetype core class. This archetype loses ranged legerdemain in favor of +1/2 class level to Bluff and qualifying for Feint feats sans Expertise or Intelligence. Additionally, daze loses the HD-limit, which is a surprisingly interesting tweak on the engine here. Instead of Scribe Scroll, we get Deceitful. Instead of arcane bond, we get Signature Skill (Use Magic Device) and add Intelligence bonus to UMD checks as well.

The changeling bloodline nets Disguise as a class skill and focuses on disguise/alter self and polymorph spells, culminating with frightful aspect etc. Interesting: The arcana makes you ignore armor check penalty when wearing glamered armor – this adds the equipment-based angle to the disguising focus. Bloodline Powers net +1 to enchantment DCs and 1/day charm person as a SP at 1st level. 3rd level nets you 3 + Charisma modifier rounds of claws that may be grown as a free action. Damage is properly noted for Small characters as well, but the damage type requires defaulting. At higher levels, the damage increases and the claws become cunning. 9th level nets Cha-mod times Silent Spell sans spell slot increase. At 15th level, you may, as a move action, start an aura that makes it impossible for you to be individually targets by spells and SPs for up to sorcerer level round per day. The capstone nets either transmutation immunity or +4 save DC versus transmutation and +2 Cha and Dex. Solid bloodline.

The pan swashbuckler replaces Ride with Fly and gains the flight hex at first level, but may only use it while panache is greater than zero. Not a fan of this unassisted flight option at first level. At 8th level, instead of the bonus feat, the pan may expend 1 panache for +1 minute of flight per day. I assume this is no action or a free action. 1st level provides an interesting angle: For every rank in Perform (wind instruments), the pan gets to choose one from countersong, fascinate and distraction. The pan may maintain these bardic performances for class level + Charisma modifier rounds. Minor complaint here: Multiclassing interaction would have made for a helpful note here. The pan only gets 2 deeds whenever new deeds are gained.

Really cool: We get two new items: One handy lore book, and one alchemical mop that eliminates quickly traces of blood! Love this one! 3 racial feats are provided: Spell Rend is OP as hell. When you confirm a critical hit, as an immediate action, you can cast a touch spell on the target sans AoO. This should have limitations regarding casting duration, it should specify whether the touch spell still must hit, and flavorwise, it implies it only works with claws, which it RAW doesn’t. This does not work as intended. Spiteful Strike lets you, 1/day, as part of an attack action, declare a spiteful strike with a +1 morale bonus to atk and damage that increases to +2 at 10th level. This is boring. Strange Humor lets you 1/day as an immediate action apply Charisma modifier to a single Fort- or Will-save. This is the only worthwhile feat here.

The new magic items are thankfully a return to form: The queer egg can crack loudly in the presence of shapeshifting beings, forcing them to resume normal shapes. There is a claw-enhancing ring and there are caltrops that become living spider swarms upon damaging targets – cool! The pdf also contains 3 new spells: Create Changeling makes infants changelings; made from scratch is theme-wise cool: the spell targets a living creature or corpse and transforms it into food. Here’s the problem: The level 6 spell is save-or-die and is thus better than finger of death in all but range. OP, needs nerfing. Topsy turvy should probably be a cantrip, not 1st level. It renders a close target prone on a failed save – for 1 round.

The pdf also sports a metric ton of favored class options for diverse classes, including e.g. PDG’s Brujo and gladiator, illuminates and the classic classes + ACG and OA classes. We end the pdf with a sample level 1 bloodrager changeling.

Editing and formatting are generally really good – with a few exceptions, the pdf is precise in both formal and rules-language categories. There are a few broken components among spells and feats that are problematic, though. Layout adheres to a 1-column b/w-standard with purple highlights, and the pdf actually sports nice full-color artworks. The pdf comes fully bookmarked for your convenience.

Aaron Hollingsworth’s changelings are REALLY COOL. I did not expect to like these to the extent I ended up enjoying them. The expansion of the changeling trope makes these feel fresh, creative and novel – a huge plus as far as I’m concerned. The rules-operations similarly represent some neat and fun tricks, particularly among the base racial features and the item array. In fact, this was pretty much en route to getting my seal of approval, when the problematic feats and spells, as well as the very dippable and slightly problematic swashbuckler archetype dragged this a bit down. That being said, for the low asking price, you actually get a really fun expansion for the changeling concept, one that actually will find its way into my own game. Considering the more than fair asking price of just $2.99, this is easily worth getting, in spite of its minor blemishes. As such, my final verdict will clock in at 4 stars.

You can get this rough, but also inspiring, inexpensive pdf here on OBS!