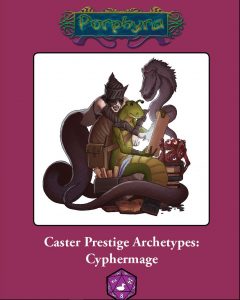 This installment of the Caster Prestige Archetype-series clocks in at 7 pages, 1 page front cover, 1 page SRD, leaving us with 5 pages of content, so let’s take a look!

That out of the way, let us take a look at the class herein, with is built on the chassis of wizard and the cypher mage, with d6 HD, 2 + Int skills per level, with d6 HD, 2 + Int skills per level, full spellcasting progression, good Will-saves and 1/2 BAB-progression. Proficiency-wise, they only get simple weapons. Cypher mages may also select additional bonus languages. Cyphermages must choose between an arcane school and arcane bond; in the former case, they’re locked into divination. They may also choose a wizard bonus feat in lieu of a cypher lore.

Cypher lore would be the talent-array of the prestige archetype, with the first gained at 1st level and subsequent lores being unlocked at 3rd level and every 2 levels thereafter, meaning that the class, as presented, sports some serious player agenda. These include bypassing symbols, automatically analyzing scrolls, extended summon-lists, metamagic-enhancers of scrolls, better giant-mind subversion, using Int instead of Cha for UMD

Cypher mages cast spells from scrolls at +1 caster level higher than that of the scroll and +1 to checks to activate scrolls with CLs exceeding his own. Cypher mages also receive a cypher pool equal to his “Intelligence bonus + 1/2 class level” (that’s usually presented the other way round, to engage in a cosmetic nitpick) – these points may be expended to increase the CL of a scroll by 1 or the DC to recognize a spell by 5, but at the cost of increasing the activation to a full-round action – and yes, this can be used in conjunction with spontaneous metamagic. And yes, dear readers – the aforementioned summoning enhancer is actually new and not something the base PrC had – so kudos! A known cypher lore that requires a swift action to activate may be chosen at 10th level and thereafter be activated as a free action, with 14th and 18th level adding another one to the array.

2nd level yields Scribe Scroll and the capstone yields the bonus to saves versus glyphs etc. – a less bland capstone would have been nice to see in this redesign.

As per the tradition of this new series, we receive information on using arcanist, psychic, sacerdote, and witch as alternate chassis-bases, so if you wanted to play a cyphermage adept based on one of those classes, you’re in luck. It should also be noted that these modifications this time around are more complex than in other installments

The prestige archetype does include a significant array of class-specific favored class options for core races and some of the stars of the Porphyran races.

Carl Cramér’s take on the cypher mage is a definite step up from the PrC – the prestige archetype is well-crafted, fun and solid – the cypher points add player agenda from the get-go and make the experience of playing the class more interesting than it would be without them. While I would have loved that class feature to be more interwoven and while the capstone still isn’t that impressive, we have a good installment on our hands here. Hence, my final verdict will clock in at 4 stars.

You can get this Caster Prestige Archetype here on OBS!