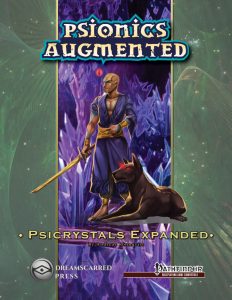 This installment of the Psionics Augmented-series clocks in at 15 pages, 1 page front cover, 1 page editorial, 1 page SRD, 1 page advertisement, leaving us with 11 pages f content, so let’s take a look!

Psicrystals have always been a crucial, distinct feature of the psionics system as far as I’m concerned; the idea of taking a part of one’s personality, extracting it and having it float along as an externalized component of a facet of your personality has pretty much been roleplaying gold, as far as I’m concerned. Thus, the introduction of this pdf’s content, which talks about the different types of psicrystals, how they’re created and the interaction with them, at least to me, represented a tantalizing reading experience. This section also deals explicitly with the details of repairing psicrystals and provides an expansion for Psicrystal Affinity: For the purpose of this feat, all feats that depend on it and all abilities that stem from it, all psionic class levels are treated as manifester levels – this, among other things, makes psicrystals relevant for a whole new cadre of psionic classes. Building on Psicrystal Affinity, there is a new feat herein that represents a gateway to an array of new tricks, namely Superior Psicrystal – the type of option I am talking about would be the attuned psicrystal.

Provided a character has the feat and 5th level, the psicrystal gains significant additional benefits that depend on the class chosen: Psychic Warriors receive better natural AC and more hit points for their crystals, Wilder psicrystals can absorb the negative effects of psychic enervation, with scaling daily uses. Kineticist psions (not the base class, the psychokinesis specialists!) gain free augmentation power points when channeled through the crystal, rewarding the teamwork-use; telepaths can, for example, borrow the sighted ability. Marksmen may use their psicrystals to negate Dex-bonuses to AC or even evasion, while soulknives may attack through the psicrystal and e.g. dread or cryptic may have their psicrystal employ their own tricks. Finally, the collective-generating classes receive appropriate bonuses for the inclusion of the psicrystal – all of these powerful benefits, mind you, are balanced via scaling daily uses and some are pretty complex rules-operations, in spite of the deceptive brevity of the material – so yeah, impressive.

There is a third option unlocked via the feat would be the merging ritual which allows the psionic character to merge the psicrystal with animals etc., creating a familiar-like crystallized creature: This creature behaves like a psicrystal sans the sighted and self-propulsion abilities; the amalgam has the higher Intelligence score between psicrystal and the creature’s Intelligence, with unintelligent base forms treat their Intelligence as 1 instead. While the base creature thus uses the base form of the animal companion, the psicrystal-infused creature does not require Handle Animal. The base level of the psionic determines btw. the base forms available and the respective implanted psicrystal has its own little table of gained abilities.

Another option would be the empowered psicrystal – this option nets a +2 bonus to Intelligence and a doubled range for sighted, telepathic speech and sight link ranges. Beyond these, they get to choose psi-like abilities.

There is also the weapon psicrystal – and yes, the rules are concise and once again feature their own table. As an aside: I LOVE this option. My player’s favorite legendary weapon I designed for my games was “The Blade of Shards”, a blade of fragmented minds of psicrystals whose owners had become insane; in order to wield the weapon, one had to accept that one sooner or later would join the cacophonous choir or bloodthirsty mind-fragments contained in the blade. It could generate storms of razor-sharp crystals, extend…etc. I had to build that weapon from scratch back in the day, whereas here, we have a balanced, more subdued engine that makes for a great base-line for such designs, though obviously, the focus here is more on making an intelligent blade that shares part of your personality.

Beyond all of these options, we also receive a plethora of new feats herein, which interact smoothly with the new options and build upon them Cortex Strike allows, for example, to add sneak attack damage to psionic weapon when used in conjunction with the psionic weapon version of Superior Psicrystal. Yes, there is an Improved follow-up feat – which converts the damage to psychic damage, being usually one of those damn make-believe damage types I harp on about…but considering the steep feat-investment and the fact that it converts sneak attack, an often subpar damage-option, makes me actually okay with it, just this once. 😉

Flexible Personality is a true gem, not only for benefit-purposes, but also for RPG-purposes – 1/day, as a standard action, you can change your psicrystal’s personality, which makes all kinds of sense to me and can be absolute roleplaying gold. Of course, enhancers for aforementioned Psi-like abilities of the empowered version. The option to allows a psicrystal to refocus as long as you still have power points increases their utility and flexibility as well. Focusing weapons for reducing critters to 0 Hp can potentially be cheesed in a ridiculous scenario based on iterative attacks slaying kittens, but the scenario is so out there and limited in its effectiveness, not even I want to really complain there. Combining Cleave with Psionic Weapon’s focus expenditure is interesting – as is the option to forego regular damage and sneak attack damage when attacking with a psicrystal weapon to instead inflict Strength damage…sounds cheap? Well, it kinda is, but the required expenditure of psionic focus imposes a sufficient tax on the option…as does the array of prerequisites required to take the feat. Also really cool – psicrystals that may shed their body analogue to the uncarnate class feature.

The pdf also provides two new psionic powers: Autorecall lets you immediately recall your psicrystal , with an augment for immediate action recalls as well, allowing for some amazing tactics, even before the option to get a kind of contingency-like recall for the crystal. Hide Psicrystal is actually more flavorful than you’d think – it’s not simply a cloaking power, it fuses the crystal with your body.Aegis gain a new 1 point customization and soulknives a new blade skill for use with the psicrystal options herein and, very, very cool and seriously overdue: We close with a nice, complex and greatly expanded list of psicrystal personalities. Kudos indeed!

Editing and formatting are very good, I noticed no significant glitches apart from stuff like its/it’s or an inconsistent formatting of psicrystal abilities (sometimes italicized, sometimes not). Layout adheres to Dreamscarred Press’ 2-column full-color standard and the pdf comes fulyl bookmarked for your convenience as well as with a nice, more printer-friendly second version. The pdf sports a nice full-color artwork as well.

Andreas Rönnqvist seems to effortlessly put his boot down in this pdf and squashes any doubt regarding his capabilities; one of the original masterminds behind DSP’s psionics, he creates a pdf that looks pretty humble at first glance. But only at first glance – oh boy, does this deliver!

The options for the new psicrystal variants in this pdf are incredibly diverse and allow for a ton of customization, sure – but they don’t scream loud in your face what you should do with them. Instead, this pdf takes a bit of time to simmer, a bit of contemplation, until you realize that vast amount of amazing stuff you can do with this. Taking one crucial, yet neglected component of psionics and expanding its identity to this extent is amazing. Doing so while retaining balance of the options presented is glorious. From the gem-possessed animal to the intelligent blade, this book represents a cornucopia of not only viable rollplaying options, but also pure ROLEplaying gold, extending psionic concepts in an impressive manner.

Instead of throwing archetypes at s, we receive a smooth and yet complex extension of the base psicrystal rules that add a whole new, amazing dimension to them. I not only love this pdf, I consider it also to be the very first psionics augmented book that is, without a doubt, a must-own addition for everyone using Ultimate Psionics. Class does not matter, neither does race; no matter whether your game is high-powered or low-powered, this pdf feels like an organic extension of Ultimate Psionics. It will not break low-powered, gritty games and it will have sufficient oomph and impact for the high-powered ones. In short: This is a little masterpiece and an absolute must-buy for all fans of psionics. 5 stars + seal of approval…and for campaigns with psionics, this is essential…hence, this receives my EZG Essential-tag and also is a candidate for my Top Ten of 2016. Best expansion you can currently buy for psionics, with only the glorious Living Legend and Mind and Soul coming close, and these two are more specific in their appeal, focusing on archetypes. In short: Get this!

You can get this amazing psionics expansion here on OBS!

You can directly support DreamScarred Press here on patreon!